Jan Banning – Down and Out in the South 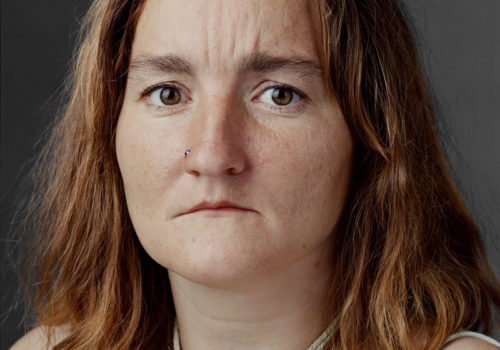 “How I am going to tell something about a person I don’t know? That is a question I asked myself ten, fifteen years ago.” For Dutch photographer Jan Banning, the question is crucial. He has always been a photographer interested in social political matters, and in subjects that have often been neglected within the medium (think power, bureaucrats, or the judicial system). Portraiture is at the heart of his work.

In his latest project, “Down and Out in the South”, Banning turned his camera to homeless people, while doing an artist residency in Columbia, South Carolina in 2010. It was an issue that he felt had been well covered but his interest for it grew as he started meeting homeless people through local connections. He eventually decided to expand his work to other parts of the South, including Atlanta and areas of the rural Mississippi Delta.

The result is a series of 42 portraits of men and women, taken in studio, with his imposing medium-format Fuji GX680, over a neutral gray background, Forty-two faces looking straight, with a sense of dignity that takes away the grueling physical details resulting from the street’s life.  “I wanted to photograph them not as homeless, [..] not in that typology of homeless people, without any specific stigma, without the paraphernalia, not in some kind of dramatic black and white. In other words I wanted to photograph them as individuals, not as the other, the person different from us the way I have often seen homeless people pictured, but like anybody else… That is why I created a studio and concentrated on who they were rather than what they represented.”

Out of the some 100 persons he photographed, Banning retained 42 for the series, sometimes leaving out some portraits that he felt were too “funny” and expected of homelessness. Twenty prints were exhibited at the Big House Gallery in Atlanta, as part of the month-long photography festival “Atlanta Celebrates Photography.” They will hang soon at the Atlanta Mission, where the photographs were taken. Starting Oct 18th and until the 31st, the project will be visible in the evening, in a series of six video projections in a public installation downtown Atlanta, where numerous homeless people live.

For Banning, bringing the photographs to where they have been made is a very important gesture. “From the moment I started this project, I wanted it to be shown in public spaces because […] if you put it only in a gallery or a museum, it is going to attract a very limit amount of people. And I would very much like to somehow get to the people who will not come to the museum or a gallery and put them in their face.

Down and Out in the South – Jan Banning
October 18 – 31, 2012
Digital Arts Entertainment Lab at Georgia State (on the corner of Pryor St. and Edgewood Avenue at the SE corner of Woodruff Park), projection in public space in Atlanta, GA, USA