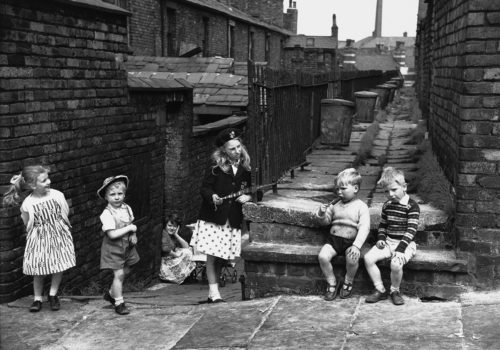 James Hyman Gallery presents a special opportunity to acquire the original framed exhibition prints from Shirley Baker’s most important exhibition, Women and children; and loitering men. All works come direct from the Estate of Shirley Baker.

Women and children; and loitering men was first staged at the Photographer’s Gallery (16 July – 20 September 2015) and then toured to the Museo Cerralbo, Madrid (2 June 2016 – 28 Aug 2016) and Manchester City Art Gallery (19 May – 28th August 2017). Focused on Shirley Baker’s most celebrated street scenes photographed around Manchester and Salford, the exhibition featured many of her best loved photographs.

This exhibition was the last on which Shirley Baker worked as she sadly died before it opened to the public but she was directly involved in its development. The exhibition proved enormously popular and along with a coincidental book of the same name did more than anything to confirm Baker’s importance. It established her as a significant British photographer of the post-war era: a compassionate humanist photographer and teller of stories that make visible the spectrum of man’s resilience.

The accompanying publication featured a foreword by Professor Griselda Pollock and a commissioned short story by award-winning author Jackie Kay. The catalogue sold out of both first and second editions before the exhibition ended.

One of the only women practising street photography in Britain during the post-war era, Baker’s photographs capture daily life on the streets of inner-city areas of Manchester, including Hulme and Salford. The most famous works show children and women outside their homes and in the surrounding streets or against a backdrop of dilapidated buildings and building sites. At times they echo the French photographer Henri Cartier-Bresson (1908–2004), the American photographer Helen Levitt (1913-2009), and the Swiss-American photographer Robert Frank (1924–2019).

Shirley Baker, wrote of her motivations: “I love the immediacy of unposed, spontaneous photographs and the ability of the camera to capture the serious, the funny, the sublime and the ridiculous. Despite the many wonderful pictures of the great and famous, I feel that less formal, quotidian images can often convey more of the life and spirit of the time.”

Several photographs by Shirley Baker, from the collection of Tate Britain, are presently on show in their display After Industry: Communities in Northern England 1960s-80s (13 Dec 2021- July 2022) and her work will also be included in the upcoming Barbican Art Gallery exhibition Postwar Modern: New Art in Britain, 1945-65 (3 Mar—Sun 26 Jun 2022). There is also an exhibition at the Kennel Club in Mayfair entitled Shirley Baker. For the Love of Dog (4 Nov 2021 – 1 April 2022)

All works are for sale, subject to availability with prices starting at £1,800 + vat.

This is James Hyman Gallery’s third presentation of works from the Estate of Shirley Baker, following the acclaimed exhibition Shirley Baker. A Different Age in 2020 and our Spotlight on Shirley Baker at Paris Photo in 2016.