India, in the mirror of photographers 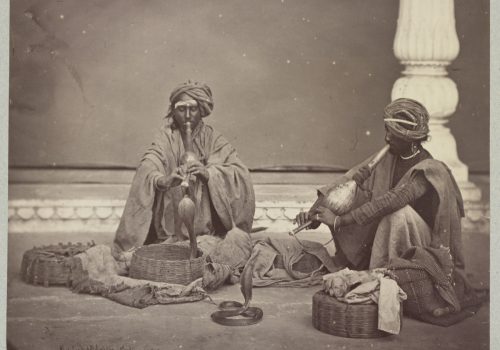 90 original prints from the second half of the 19th century illustrate the greatness of Indian civilization through landscapes, architecture, scenes of everyday life and characters.

Presenting ninety original prints, landscapes, architecture, scenes of everyday life or characters, this exhibition illustrates the greatness of Indian civilization, and how photographers of the second half of the 19th century shaped abroad the image of a country for many still mysterious and unknown.

In 1839 the birth of photography was announced in Paris. Immediately, the British press echoed in major Indian cities. A decade later, Bombay, Calcutta and Madras are the focus of this technical and artistic development.

The Raj, British India, founded in 1858, provided a framework for its development, including through military, even before the arrival of talented civilians. Among them, Sergeant Linnaeus Tripe began in 1854 and presented himself at the Madras exhibition where the jury described his work as “the best series of photographic views on paper”. The quality of his prints makes him a major author of the beginnings of photography. Shortly thereafter, William Baker, a retired sergeant, founded the Baker & Burke studio in 1861 in Murree (present-day Pakistan) with John Burke, who took it over in 1873 as John Burke Studio. With his partner, he realised the very first landscapes of Kashmir.

This Western technological invention contributed to shaping the image of the country. The lights of India, worked by the eye of the photographers, provide varied and inexhaustible subjects. Each state had its share of originality – especially those of the north of the country for the sumptuousness of their architecture, its ethnographic diversity or the majesty of its landscapes. The “icons” cities such as Delhi, Fatehpur Sikri, Agra or the ancient Benares (now Varanasi) and the archeological sites or famous monuments (Elephanta, Qubt Minar, Taj Mahal) have fascinated their contemplators who have seized the monumentality and great wealth of detail.

Photographers who have gone in search of new spaces arrived on the spot with an important visual culture. This is the case of Samuel Bourne, active in India from 1863 to 1870, who, on the occasion of three important expeditions in Kashmir, made the first exceptional landscapes of this region. The extraordinary sights he reports are a notable fact in the history of landscape photography.

In the transparency of the emulsion of photographic prints on paper, India contemplates its reflection.