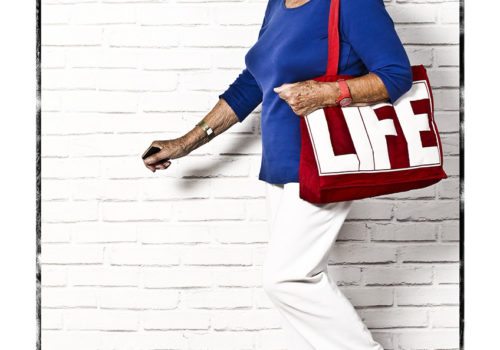 Hélène Véret had a fascinating banter, a joie de vivre, a passion for photography.

She was Madame Life in France during the 60s, 70s, 80s and 90s when the magazine tried to resurrect. One of the most beautiful and disinterested characters that I have had the chance to meet.

Anyone who met Hélène Véret, or Madame Véret, as she was known to many, knew she was a force of nature.  So this week we were heartbroken to learn that Hélène, longtime picture person for LIFE magazine and one of the most beloved figures in the Paris journalism community, had died at age 88.

“Such a “bouncy” force —to use a term she loved. Joie de vivre indeed. She brought EVERYONE into her circle of light,”  says David Friend, former LIFE Director of Photography who worked closely with Hélène down through the years.   Former TIME correspondent William Dowell put it this way:  “A hole in the universe” says it best. Hélène was more than a fun person to be around. She was an inspiration who shaped our lives and some of the best moments in all our lives. She kept us going during the darkest of times.”  Jordan Bonfante, former TIME Paris bureau chief, recalls “I go way back to the old LIFE Magazine where Hélène was already a belle of the ball…. our smart, lovable, live wire Hélène. How much friendship did she extend to us all? How many favors did she do for us, every one of us all over the place. How many laughs did we have over her every blasphemy, mon chéri? Let me count the ways.”

There were countless ways that Hélène inspired us and made us happier.  She was irrepressible, vibrant, glamourous, a blond bombshell – a French femme fatale without the toxic ingredients, a natural-born free spirit feminist.  She was a mesmerizing storyteller with an encyclopedic repertoire of showtunes and ribald songs.  We revelled in her colorful epithets for people.  She addressed us as mon bebe, mon trésor, mon nounours, belle dame, mon beau jeune homme (could be any man, age 15-90 years), lovely lady. She never swore but made judicious use of “Thanks to God” (with an S too many) and the old-fashioned euphemism scrogneugneu, which actually sounded worse than the original sacré nom de Dieu. She was warm, generous, kind, wise, tolerant, diplomatic — and she always delivered whatever it was that New York was clamoring for.

Hélène’s youthful years included plenty of adventure and gave her a unique skill set that turned out to be a perfect fit for a job at an American magazine. She was born in 1932 in Brittany and learned to walk in traditional wooden clogs.  Her father was an engineer, her mother a schoolteacher. Hélène obviously had a pioneering soul because she went off to the United States to study English literature at Bucknell University, in Pennsylvania, then decamped to San Francisco where she taught English by day to the children of WWII fleet Admiral Chester Nimitz.  By night, she sang French chansons at the Fallen Angel cabaret, where she shared the stage with Johnny Mathis.

Returning to France, she proceeded to hitchhike across Europe. Towards the end of the 1950s, she and her friend Bob Hussong founded the American in Paris Club, a help service for clueless expatriates who were arriving in the French capital in droves at the time. Among her friends back then were writer James Jones and actor Anthony Perkins (one of her dates). Somewhere in there, she once told us, she was hanging out in a smoky Saint-Germain-des-Prés nightclub and a dark handsome stranger asked her to dance. It turned out to be Albert Camus (“He was a good dancer”).

In 1961, Hélène settled down — so to speak. She married Jean-Louis Veret, an architect who co-founded the famed Atelier de Montrouge and worked with Le Corbusier, notably on his city in India. (They were married for 50 years, until his death in 2011, and had two daughters, Estelle and Diane.)  That same fateful year, 1961, Hélène joined the staff of Life Magazine’s Paris bureau as editorial assistant to bureau chief Hugh Moffat. She never looked back, working for numerous bureau chiefs after that.

She loved those days when LIFE was a weekly, when parties were at the Tour d’Argent and champagne flowed by the magnum. She didn’t shrink from the challenge of dealing with big egos, temperamental or philandering bosses and swaggering LIFE reporters showing up in fatigues and puffing on cigars (like war correspondent Michael Mok).

Throughout her career, Hélène triumphed in almost every situation. Couldn’t get a hotel room in Arles during the photo festival?  All you had to do was drop her name at the desk.  “The woman in the red glasses?  Ah oui, I think we just found something for you.”  When Pierrette Le Pen, ex-wife of far right politician Jean-Marie Le Pen, posed for French Playboy in a scanty maid’s outfit, editors at the monthly LIFE wanted the story but insisted on reshooting a more “family magazine” portrait.  The Playboy honcho balked at first, but minutes later, he and Hélène  could be heard on the phone, loudly singing risqué songs.   When Hélène hung up, she had Pierette’s personal phone number.

In fact, the only time Hélène ever missed her professional cue was once in the 80s when she was seated at a gala occasion next to Henry Grünwald, top dog of the TIME-LIFE empire.  “So, Hélène, how’s life?”, she heard him ask. In her sprightly and sociable manner, she gave him a detailed and amusing update on her family and recent activities. “I meant the magazine,” snarled Grünwald.

Through the years she charmed and cajoled umpteen photographic legends. David Douglas Duncan, Robert Doisneau (he lived down the street), Marc Riboud, Dmitri Kessel, Sabine Weiss, Harry Benson, Stanley Greene.  Henri Cartier-Bresson was a close friend, as was his wife, photographer Martine Franck (Hélène played matchmaker by introducing them).  One day LIFE asked Hélène  to wrangle a quote from HCB about another well-known photographer. He faxed back a witty – but disobliging– five words.  Hélène picked up the phone and told France’s photographic icon the quote was unacceptable.  When he refused to change it, she called him a “hysterical monument”.  Only then did he relent – and he faxed her a bland but publishable quote.

She often coined affectionate nicknames — hysterical monument — for photographers.  Another tempestuous shooter was forever “The Beast of the East”.  But in her most lasting position of LIFE picture correspondent – until its final demise as a monthly in 2000 –  she was never the kind of photo editor who sacked people’s work or pooh-poohed their projects.  On the contrary, she encouraged them. She was genuinely interested in the places they had just come back from, whether it was a war zone or an obscure spot of exceptional beauty. Many poured out their woes, confiding in her about the increasingly difficult time they had earning enough money, managing family absences, etc.  They might leave without an advance or an assignment in the bag or five double spreads, but they left feeling she cared about them and they could believe in themselves.  Many turned up even when they had no photos to pitch, just to talk.  And of course she called them all mon bébé.

Hélène had another gig she loved.  She contributed commentary to the BBC, covering   everything from fashion shows to President Francois Mitterrand’s funeral.  She was able to communicate the quintessential Frenchness in any given situation, all delivered in “the poshest French accent”, as one BBC producer gushed after an interview.  She had an innate talent for telling a story with just the right amount of franglais thrown in – and the BBC loved that.  As Susanna Schrobsdorff, a former Paris TIME colleague recalls, “Once I was eating breakfast in Brooklyn and there was a BBC radio report about, maybe, Yves Saint Laurent’s death and I heard this VOICE…this thrilling, totally over-the-top French account.  And sure enough, it was Hélène, saying something about models with “le very very big bottoms.”

There are endless entertaining anecdotes we could recount about Hélène as a colleague and a friend, all the times she amused and amazed us.   Like the several occasions at the Perpignan photo festival’s closing soirée, held at a beachside restaurant, when she bounded into the midnight surf wearing only her panties. Or the time she surreptitiously scattered a baggie of an American friend’s ashes in the garden of the Ritz Hotel, honoring his deathbed request.  Or the time she rescued Audrey Hepburn from a posse of paparazzi, whisking her off in her Deux Chevaux and taking the delighted movie star for a spin on the Champs Elysées.

Hélène enhanced our lives in so many ways.  She personified LIFE (we don’t mean just the magazine) and she herself was larger than life. She will be deeply missed.

May she be in some cabaret somewhere holding court, singing, wearing red.

Tala Skari worked with Helene at LIFE as Paris correspondent in the 80’s and 90’s, while Cathy Nolan was in charge of the Paris bureau of People Magazine.