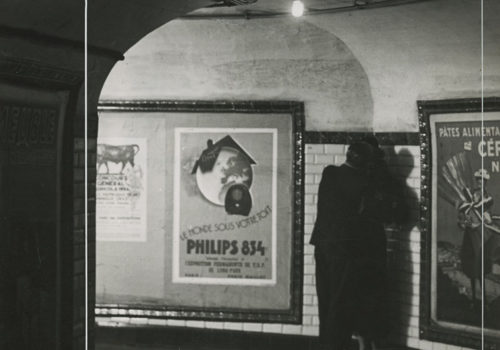 A unique set of photographs of Paris in the 1930s by Brassaï is shown at Howard Greenberg Gallery until October 24, 2015. On view for the first time in New York, Brassaï and Henry Miller’s Paris is an exhibition of the 27 Brassaï prints used to illustrate the first edition of Miller’s novella Quiet Days in Clichy. Published in 1956, the novella is based on Miller’s rousing experiences as a struggling writer in Paris.

When Brassaï moved to Paris in 1924, where he remained for the rest of his life, he became friendly with a group of bohemians, artists, and expatriates. Inspired by the work of fellow Hungarian André Kertész, he began to explore Paris with his camera in 1929. Brassaï became legendary for his exotic nocturnal views of the city and its residents. Henry Miller, notorious for his racy and groundbreaking prose, arrived in Paris in 1930, and shared Brassaï’s passion for the street life of the city.

The Brassaï prints on view at Howard Greenberg Gallery include such intimate and clandestine scenes as a man leaning against a lamp post drawing a woman towards him, a window full of mannequins clad in lingerie, shadowy streets and dark byways, and a couple at a bar where the beautiful woman gazes impassively as the man ogles her. The prints are distinct in that they show the crop marks needed to illustrate the tall, narrow Miller novella. Many of the iconic images in the exhibition were published in earlier books by Brassaï including Paris de Nuit (1933) and Voluptés de Paris (1935), earning him the nickname ‘the eye of Paris’ from Miller. In 1975, Brassaï published the biography Henry Miller: The Paris Years, about their years in the City of Light.
EXHIBITION
Henry Mller’s Quiet Days in Clichy
by Brassai
Howard Greenberg Gallery
10th September – 24th October, 2015
Howard Greenberg Gallery
41 East 57th Street
Suite 1406
New York, NY 10022