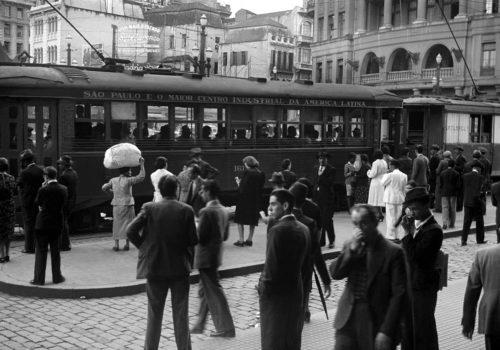 Hildegard Rosenthal is one of the great exponents of modern photography in Brazil, known mainly as a photojournalist. She came to São Paulo in 1937, where she lived until her death. She made multiple records in street photography, with a modern character, being one of the female precursors of candid images in the urban space – as well documentary and night photography essays. Recently, a series of self-portraits and of fictional character has surfaced, images she had not shown in exhibitions during her lifetime.

The photographer imprints a documentary focus on the metropolis of São Paulo, in full transformation in the 1940’s, bringing to light what seems to have been forgotten by the city dwellers, such as daily life. She brings out how the citizen uses the city, as well as the human types on parade before our eyes like characters on a big stage, which is a city.

She was born in Zurich, Switzerland, in 1913, but her parents were German. She studied in a Protestant school for girls, the Katharinenschule, in Frankfurt. Children always caught her eye, and when she became an adult she specialized in Pedagogy, in France.

In her youth, Hildegard already carried a photographic camera around. In the beginning of the 1930’s, she recorded a boy with a dreamy air, sensitive, making his portrait with a 5×9 camera. With this photograph, featuring a New Vision approach, Hildegard won the Neue Ferie Press (present day Die Presse) newspaper prize, of Vienna.

Hildegard, at the age of eighteen, took the photography course offered by Paul Wolff, lasting a year and a half, with an emphasis on practice. He was the first photographer to use the Leica camera in his work in the area. This camera was her main companion in the course of her life.

After that she took another course at the Gaendel Institute, also in Frankfurt, for three years, where she studied chemistry and carried out a lot of developing and enlarging work in the laboratory.

In 1933 she went to Paris with the aim of continuing her studies, working as an au pair. There she met Walter Rosenthal, a Jew of Polish origin, whom she would later marry. At the time, she worked at the house of Mark Szwarc and Eugenia Markowa, and she ended up meeting artists and intellectuals of their friendship circle. Jankel Adler, from this milieu, knew painter Lasar Segall, European immigrant, who introduced her to the art circuit of São Paulo. The couple came to Brazil, fleeing from the ascent of Nazism.

Hildegard arrived in São Paulo in 1937, where she worked as a laboratory assistant in the photographic company Kosmos. After that she was hired by the Press Information photographic agency as a photojournalist and started to produce images for national and international magazines about the Brazilian context. During this period she carried out documentary photographic essays in the southeastern and southern regions of the country. She also made portraits of artists such as Guilherme de Almeida (1890-1969), Lasar Segall (1891-1957), Jorge Amado (1912-2001) and Yolanda Mohalyi (1909-1978) among others. With the birth of her first daughter in 1948, she stopped her professional activities, returning to photographic work in the 1070’s, when she was rediscovered by Walter Zanini, director of the Contemporary Art Museum of the University of São Paulo (MAC-USP). She was then invited to participate in a series of exhibitions. The Museum of the Image and Sound (MIS-SP) opened in 1975 with photos by the artist, shown in the exhibition titled Memória Paulistana. The Moreira Salles Institute (IMS- SP) bought the photographer’s collection, composed of 3,400 images in 1996.

“Well, first of all, he (photographer and teacher Paul Wolff) had a certain difficulty in convincing people to get used to the 35mm. Because, at that time, when we still had the 12×18, 9×12, and to get into our heads that the fast camera does not exempt judgment, criterion, the study of photography… (apud GONÇALVES, Paula Chrystina Scarpin, 2007:141)

“- We got in to a Mercedes Benz and took to the road. And then he did something that was not usual, also (…) He sought Germany’s countryside, because this exists too, it is not just the city… the countryside, the peasants (…) we left in a group. And, before setting off, he delivered a big speech about each time, each subject. You go out there and and enter a house like so, suddenly… you try to be gentle. (apud GONÇALVES, Paula Chrystina Scarpin, 2007:142).