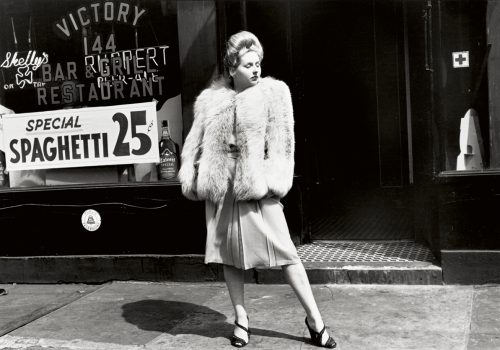 Helen Levitt is in a class of her own and the singularity of her photography is probably inseparable from the distinctive contour of her life and character. She photographed little else than the city of New York, where she was born in 1913 and lived until her death in 2009, and like Samuel Beckett steadfastly resisted attempts to have her explain her work.

On first acquaintance, her pictures from the late 1930s and ‘40s seem transparently easy to read: street photography of the working-class, especially children, framed by pavements and tenement houses in impoverished, immigrant neighbourhoods. Adjectives like ‘warm’ and ‘lyrical’ have been used and a gendered romanticism attributed to pigeonhole their pictorial quality and diminish their complexity. What can be forgotten is that Levitt’s art was forged in a cauldron of left politics, modernism and surrealism. In a 2002 interview, she looked back to a time when decision-making was decided for her: ‘I should take pictures of working-class people and contribute to the movements…Socialism, Communism, whatever was happening’.

Levitt mixed with members of the left-wing Film & Photo League, met Buñuel and Henri Cartier-Bresson and worked for a while with Walker Evans on his subway project (sitting with a female companion made him less conspicuous). The warm embers of her commitment, though, did not nurture a documentary pictorial out of concern for social conditions or the raising of consciousness. There is nothing obviously political, let alone polemical, about the pictures she took. The complexity of her work is embedded in a radical aesthetic but lies concealed behind an apparent simplicity of vision.

A way into the specifics of her art is rooted in social and economic circumstances of the time and place where she took her camera. She roamed the sidewalks of Spanish Harlem and the Lower East Side, a playground for children – poor families couldn’t afford cars (or a surfeit of purchasable toys) and vehicular traffic was not the menace of today – and a refuge for underprivileged adults to escape summer heat in the absence of air-conditioned, apartments (and no televisons). Levitt’s eye, as David Levi Strauss put it, is drawn towards ‘the society of the unspectacle – a vision of ordinary virtue’. The reference to Guy Debord brings into the picture his description of consumer culture: ‘the decline of being into having and having into merely appearing.’ Given a relative lack of consumer goods in Levitt’s territory, there is little commodity fetishism and children used leftovers and street debris for experiences of ludic being.

Levitt’s visual apprehension is somatic in nature; what she sees are bodies in space, at work or rest. They are characteristically in movement but sometimes passively or contemplatively stationary; they are always expressive, engaged, gestural. If we need a narrative to ‘explain’ a particular mise-en-scène, it may be inferred but what takes precedence is the spatial arrangement of bodies and often there is no ‘meaning’ waiting to be extracted.

A good example is her photo of two boys handling glass fragments from a broken mirror. What transcends the whimsical happenstance of a boy on a bike looking down from within the frame of the broken mirror is the bigger semiotic picture of manual (the word comes from the Latin for ‘hand’) activity taking place around him. As well as the boy’s own hands holding his bicycle – and a hand on a second bicycle intrudes at one edge of the picture – there are hands holding the mirror’s frame, a child’s hand in his pocket, and, central to all of this, the handling of the broken glass by the two boys, their vulnerability arising from their task imitated in empathy by the two hands of the boy on the left looking down at them. The background provides other layers to the composition: lettering on the laundry’s window and other shop signs: a woman’s grasp of a pram; the gesturing of three girls and the man in the straw hat. The hand of the adult seen contingently glancing at the children is not actively deployed, she just happens to be walking past, but is at one with the others in owning the space of the street; it is their polis, contracted down to the space of a sidewalk.

The choreography of the scene is natural, endorsing one of the few remarks of Levitt’s about her own practice: ‘all I can say about the work I try to do is that the aesthetic is in reality itself’.

Beginning in the late 1940s, she spent a decade involved in filmmaking and on returning to photography she took to colour with prescience. But street life had changed and adult alienation was occupying the space once appropriated by and belonging to its urban dwellers. The book, Helen Levitt, has over 200 pages of her black-and-white photographs and thirty-four of colour ones. Each of them has a page to itself and this, along with five insightful essays commenting on aspects of Levitt’s achievement, will make it one of the best photobooks to be published in 2020.

Luciana Abait : A Letter to the Future