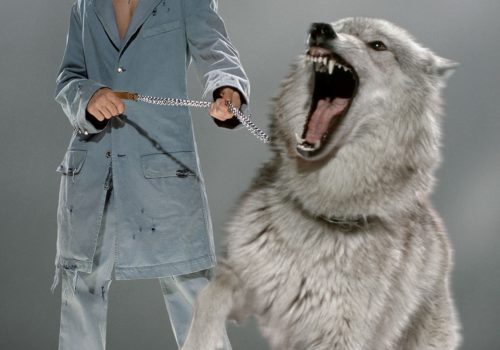 “When Iman came to the studio to choose the photograph for the cover of her book I Am Iman, she brought her husband with her, which was a great surprise,” says Swiss-born photographer Markus Klinko recalling his first encounter with David Bowie back in 2001.

At the time Klinko, who had been a notable international harp soloist before an injury cut short his career, was trying to break into the highly competitive field of celebrity photography. Working out of a small studio in New York, he says he was blown away when the musician walked in. “He was every bit as charismatic and extraordinary as one can imagine, but really kind and lovely to talk to”.

Impressed with the photographs of his model wife, Bowie suggested that Klinko work with him on the cover for his album Heathen. “That was one of the best experiences I’ve ever had…David was so collaborative. He came with a lot of ideas, but was also interested in my thoughts”.

“Iman and David opened a lot of doors,” says Klinko who has since photographed a procession of contemporary musicians from Beyonce and Lady Gaga to Kanye West and Mariah Carey. He’s also an A-list photographer for celebrities including Kate Winslet, Will Smith and Eva Mendes.

Now based in Los Angeles, Klinko is in Sydney for the debut of his exhibition Bowie Unseen, one of the headline shows for this year’s Head On Photo Festival. The show features 22 images of Bowie along with two of Iman, which were shot for the cover of Vanity Fair on the model’s 60th birthday. The images of Iman were taken with his photographic partner, Koala, who has also curated the show.

Bowie Unseen includes photographs from the Heathen shoot as well as a series of complex composite images used in the 2002 GQ Men of the Year issue. In these photographs Bowie is pictured holding wild wolves on a leash. Or is he? In fact these images are a combination of two shoots, as Klinko explains.

“GQ wanted to feature David on the cover, but he wasn’t available. I had this idea of David with these wild wolves and talked it through with him. I told David I could extract elements from the Heathen shoot and combine them. He was intrigued and trusted me. When he saw the photographs he loved them, joking that he’d never have to do another photo shoot!”

Klinko hired a “very brave” model to act as a body double. The wolves were smuggled into his Soho studio, as it was illegal at the time to have wild animals in the city. The wolves’ trainer kept them placated with raw meat treats, while Klinko set up. “It was an adventure,” laughs Klinko adding that while he was nervous about having these enormous creatures in his studio, he wasn’t scared. “It was intense, but I wasn’t shaking like I was when I was working with Janet Jackson and had two wild black panthers in the studio!”

Alison Stieven-Taylor is a writer specializing in photography based in Melbourne, Australia.