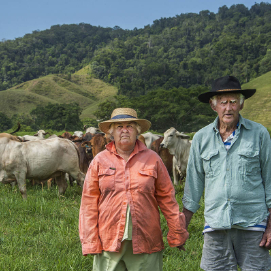 Juli Balla, Where the sidewalk ends

This stunning series by Hungarian-born Juli Balla features extravagant staged scenes that draw on street photography from the 1950s through to the 1970s.
Their filmic aesthetic is reminiscent of Gregory Crewdson’s work, although Balla has a distinct European sensibility in her visual signature.
Each tells a unique, compelling story.
Visually engaging and meticulously designed and executed, these are fabulous images that capture the imagination.

In this series Ukrainian-born Dina Litovsky, who has lived in New York since 1991, shows us another side to the city’s meatpacking district.
Transformed at night into what she calls “a microcosm of sexual politics,” this former working class district was once populated with fetish houses and gay bars.
Now it is a mecca for those flocking to new fashionable nightclubs, which attract young single women looking for romance.
These girls who place themselves on parade hoping for Mr. Right, outnumber the opposite sex creating an environment in which competition is rife, giving new meaning to the idea of ‘meatpacking’.
In her work Litovsky doesn’t make any moral judgments, rather she captures scenes as they unfold, the industrial setting making for a startling background to the painted and stiletto-heel clad throngs of women hoping to be the ‘one’.

Based in Far North Queensland, photojournalist Brian Cassey, who was born in London, has been shooting since he was a lad.
A multi-award winner, Brian has covered sports, news and features and shares a selection of his life’s work in this exhibition.
This exhibition captures the irreverence and also the drama of life in Australia and at the same time gives an insight into Cassey’s sharp eye and astute approach to his craft.

Dutch artist Astrid Verhoef is a rising star in the world of fine art photography. Through the positioning of people and things in unnatural settings her staged photographs juxtapose the contemporary, urban world with nature.
Drawing inspiration from Surrealism and Freud, Verhoef’s contrasted black and white images explore “various emotions that arise, relating to the substance of identity, and humankind’s place in the natural world”.
The series, which is ongoing, features landscapes in Colorado and Utah (USA), The Netherlands, South Australia, and the Northern Territory.

Head On Photo Festival, Rennie Ellis Photographic Archive, and Mossgreen Gallery present this series of images by one of Australia’s most iconic photographers, the late Rennie Ellis (1940 – 2003).
This exhibition features photographs taken by Ellis over the summer of 1970-1971 in Sydney’s notorious red light district of Kings Cross, where Aussie rock, social protest and the freedom of youth rubbed against the underbelly of the city. Ellis’ images unmask the subculture of the Cross, as it is known locally, in all its out-there glory capturing a place that Ellis said “has a pulse rate and a lifestyle unlike anywhere else in Australia”.