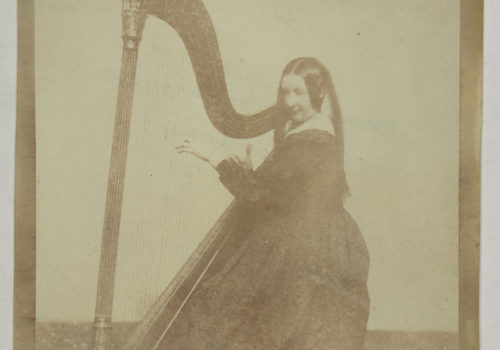 The future of a highly important collection of images by William Henry Fox Talbot, some of the earliest photographs ever made, has been secured. Through the generosity of a private individual, they are being placed on long-term loan at the Bodleian Libraries, allowing them to be studied, exhibited and made available digitally. This generous act has prevented the collection from being broken up, removed from public access or located abroad.

The collection was sold at auction in New York in April 2021 by Sotheby’s, who described it as ‘the most important lot of 19th century photographs ever to come to auction’. Comprising about 190 photographs in all, it includes many unique images, never before seen, and has a highly significant provenance, as the materials were given by Talbot, the inventor of photography, to his half-sister Horatia Gaisford. After Gaisford died in 1851, the collection remained in family ownership until the auction, and was known as the Gaisford-St Lawrence Collection.

The images offer a major opportunity for scholars and lovers of photography to better understand the emerging artform. Collected in three albums and a cache of loose prints, many of them in marvellous condition, the collection shows some of Talbot’s early experiments towards the establishment of photography on paper as well as a selection of his best work from the mid-1840s. The collection includes :

Horatia, Talbot’s half-sister, married Thomas Gaisford, the son of the Dean of Christ Church, Oxford, perhaps explaining why so many of the images in this collection are of Oxford scenes, including many colleges and the Radcliffe Camera, part of the Bodleian Library. Horatia’s father-in-law was an important figure in the Bodleian’s history in the 19th century. Along with the photographs by Talbot, the collection includes an album of Horatia’s sketches and watercolour paintings, and a folio of songs based on poems that she composed.

The collection will be open for scholars to study, and will be digitised to enable access for all through Digital Bodleian. These images will also be incorporated into the Bodleian Libraries’ William Henry Fox Talbot Catalogue Raisonné, a ground-breaking online corpus of the photographic works of the Victorian photographer. The photographs, which remained within the family for over 170 years, build on the growing photographic collections at the Bodleian Libraries, which  include copies of the earliest photobooks: The Pencil of Nature, (1844-46), and Sun Pictures in Scotland (1845).

The images will also form part of a major future exhibition at the Bodleian Libraries, curated by Professor Geoffrey Batchen, Oxford University’s Professor of the History of Art, a leading authority on early photography. Batchen writes:

Collectively they represent a wonderful cross-section of Talbot’s work, including many personal images of family and friends. The portraits, in particular, are a revelation. This particular collection complements the Talbot prints already owned by the Bodleian, adding a copy of Sun Pictures in Scotland, perhaps Talbot’s finest aesthetic achievement, to the first fascicle of The Pencil of Nature now in the Library. It seems particularly fitting that the Library will now be able to tell the story of how photographs came to be presented in book and album form, always a key aspiration of Talbot’s.

“ We are delighted to have the opportunity to preserve and make available the Gaisford-St Lawrence Collection of photography by William Henry Fox Talbot. Talbot was one of the world’s greatest innovators, and this collection shines new light on his life and work. We are especially excited to be able to digitise and add the images to our online Catalogue Raisonne. We would like to express our great thanks to the new owner for entrusting this collection to our care.”