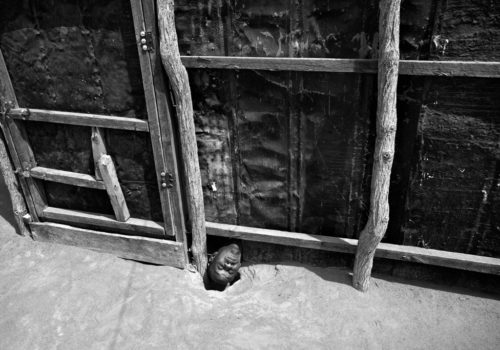 It has been a big year for Paris-based, New Zealand photojournalist Robin Hammond. In February he won the 2013 FotoEvidence Book of the Year Award for his long-term photo essay “Condemned: Mental Health in African Countries in Crisis”.  Then in October as he was preparing to head to New York for the launch of the book he received news that he was also this year’s recipient of the W. Eugene Smith Memorial Fund Grant in Humanistic Photography.

“I often have to pinch myself and say you lucky bastard,” he tells me revealing that W. Eugene Smith was his inspiration for getting into photojournalism in the first place. “I didn’t really know what photojournalism was when I started photography. I thought maybe I would do landscapes or portraits I had really little idea. And then I picked up a book called Minamata by W. Eugene Smith.”

Since then Hammond has carved a career using his camera as an advocacy tool. Now with the publication of his book by FotoEvidence, Hammond has another ace up his sleeve . It is his intention and that of Svetlana Bachevanova the driving force behind FotoEvidence, to use “Condemned” to raise greater awareness on the plight of those living with mental illness in Africa. “We’re going to send the book to various people in positions of power at WHO and the UN and other human rights organisations,” Hammond says excited about the prospect.

He is confident the strength of the work will allow those pictured to have their voices heard. Bound within the black and white cover of “Condemned” are tales of such abject despair and horror that it is inconceivable the work was shot in the 21st Century. But it was and Hammond’s courage in pursuing a subject that is largely unpopular with mainstream media is testament to his passion for the role of photography as an agent of change.

The idea for “Condemned” began in 2011 when Hammond was in South Sudan covering the referendum for independence for the Sunday Times. He noticed a mentally disabled girl begging by the roadside and casually asked his driver what happened to those with mental illness. “We put them in prison he told me. I said okay let’s go to the prison, and the story began from that point”. Hammond negotiated access and stepped into a world where the mentally ill were abandoned by society, treated with fear by families and with derision by authorities.

When he was next in Africa, this time in Uganda working with an NGO, he pursued the story further staying on after his assignment. Finding a similar situation in Uganda he decided that the story needed to be told. “There is this idea that in a post-conflict situation, like in Uganda and South Sudan where there are peace agreements, that everything is okay. But for a lot of people the war continues,” he says.

Determined to tell the story despite the lack of interest from the media to fund the work, Hammond turned to crowd funding and within two weeks of launching the project he’d raised $15,000, which enabled him to continue. When that money ran out he applied for, and was given, a small grant from the Pulitzer Center for Crisis Reporting. “I’ve covered the whole spectrum on how to fund a project,” he states.

“Condemned: Mental Health in African Countries in Crisis” covers eight African nations – Somalia, Kenya, South Sudan, Uganda, DRC, Nigeria, Liberia and Sierra Leone. In what he calls “classic photojournalist style” Hammond portrays in words as well as black and white photographs the dire straits in which those with mental illness find themselves.

Giving further weight to the images are interviews with patients, family members, medical staff and government officials, their words echoing the reality shown in Hammond’s photographs – that countries ravaged for decades by conflict are ill-equipped to deal with the sheer magnitude of mental health issues that afflict their populations. Overwhelmed and under-resourced governments turn a blind eye to a problem that many believe is insurmountable.  Instead they put patients in chains literally and allegorically.

FotoEvidence is committed to bringing stories to light that few are brave enough to tackle. “Condemned: Mental Health in African Countries in Crisis” is undoubtedly an extremely daring body of work, but these people deserve our attention. We must stop and look, as it is only through greater understanding that change can be effected.