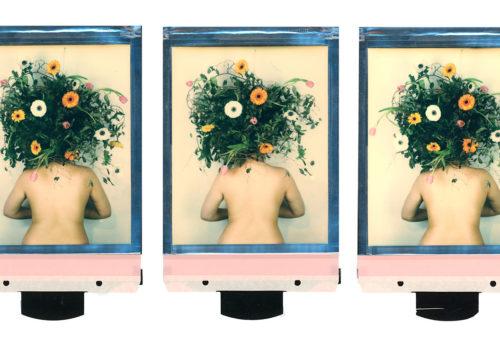 The Griffin Museum of Photography presents Rachel Portesi: Standing Still, a solo exhibition of works by artist Rachel Portesi, featuring a selection of collodion tintypes made with large-format vintage cameras that explore the evolving lifelong complexities of female identity. Also on display are a selection of 8 x 10 Polaroids, 3D Viewmasters, and video installations with footage of her process which creates a voyeuristic experience of looking through the lens at her models held in place – moving but almost still.

The works in Standing Still are part of the artist’s ongoing series of “hair portraits”, which incorporate long exposure analog photography with elaborate staged studio constructions that combine natural elements with her model’s tresses of hair. The result is a series of portraits that examine the nuanced transitions related to motherhood, aging, and choice, as well as the intersection of identity and femininity with the physical world.

While photography is an important aspect of Portesi’s work, she also collects the dried botanicals, branches, and flowers that fill her studio windows and walls blurring the barrier between outdoors and the studio. These natural elements, alongside models in her photos, are equally essential to the constructed tableau of her work.

Each portrait is the culmination of hours Portesi spends making a collaborative ‘hair sculpture’ with the model as the model stands against a wall. The subject’s hair is fastened to the wall with push pins, screws, clothes pins and fishing line (Portesi is an avid angler) intricately intertwined with symbolic objects such as fresh ﬂowers, twigs, large plant fronds, family heirlooms and mementos, and additional ﬂora from Portesi’s garden in Vermont and a nearby ﬂower farm. Several of the ‘hair sculptures’ also use ceiling-suspended ﬁshing line for additional volume.

“As I engaged with this new mode, my models became conduits of self-reﬂection–a way to look at the conﬁnes of my chosen female role from the outside” the artist explains. “And there I observed a post-maternal kind of strength wholly different from the role I’d inhabited before motherhood. Looking at them now, these images on the wall, photographs of elaborate hair sculptures constructed in my studio to change. Parts of myself I choose to leave behind. Others I bring with me.”

Standing Still is a familiar and intimate look at narratives surrounding female-identifying gendered experiences, social constructs of femininity, as well as the long-established symbolic signiﬁcance of hair.

Rachel Portesi received a BA in Sociology and Photography from Marlboro College, VT. Her work as a black and white documentary photographer was complemented by the acquisition of her ﬁrst Polaroid Land camera in 1991. Ten years later, with a move to New York City and no access to a darkroom, Portesi’s practice shifted exclusively to the immediacy of the Polaroid. Working this way resulted in a body of work produced over more than two decades ending a few years ago when an older, even more ﬁnicky and time-consuming way of making “instant pictures” caught Portesi’s attention — the wet plate collodion tintype. Her recent work explores how female identity is redeﬁned by motherhood and aging. Portesi’s photographs have been exhibited at various venues in New England and in New York, and have been written about in Vogue, Forbes, and Musée magazines among others. She works and lives with her family in Saxtons River, Vermont.