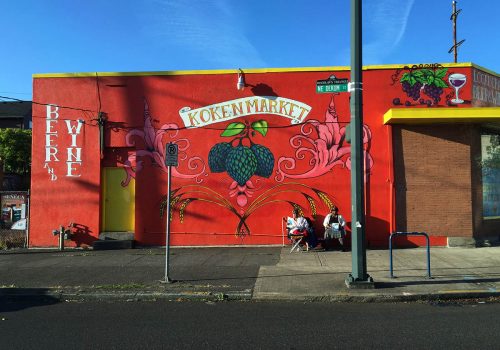 Welcome to BUS 75: HIDDEN PORTLAND, a photo/story blog that explores the great unknown of Portland via the #75 TriMet bus. This long, winding eastside line is a vein of life stretching close to 20 miles with 131 stops. From upper St. Johns to downtown Milwaukie, the 75 passes a vast array of places and spaces that are often out of view and out of the ordinary. Oddball specialty stores, old-school barbershops, subterranean music scenes, ethnic cultural centers, family-owned sausage parlors and tire purveyors, and unknown spots where people are doing uncommon things.

BUS 75: HIDDEN PORTLAND depicts the human, natural and built environment in these back pockets of Portland and documents the rich diversity of life along the 75 line. It also brings to light the gentrification and changes now transforming our city. Portland photographer Geoffrey Hiller and writer Tom Vandel provide the images and commentary. This project received a grant from RACC (Regional Arts & Culture Council) and Pro Photo Supply. Thanks for following us.

The photography of Geoffrey Hiller has been published in magazines in the USA, Europe, and Japan including Geo, Newsweek, Mother Jones and the New York Times Magazine. He has completed dozens of photo essays in Asia, Latin America, Europe and West Africa and was on the staff of the Brazilian edition of National Geographic for two years. His award-winning multimedia projects about Vietnam, Eastern Europe, Ghana, Burma, and Brazil have earned recognition from Apple Computer, The Christian Science Monitor and USA Today. He has received grants from the Paul Allen Foundation, the California Arts Council, Regional Arts and Culture Council in Portland, Oregon, among others. Hiller was a Fulbright Scholar in Dhaka, Bangladesh in 2008-2009. Most recently he has been working as an international media trainer in Cambodia, India, Myanmar, Pakistan and Vietnam.