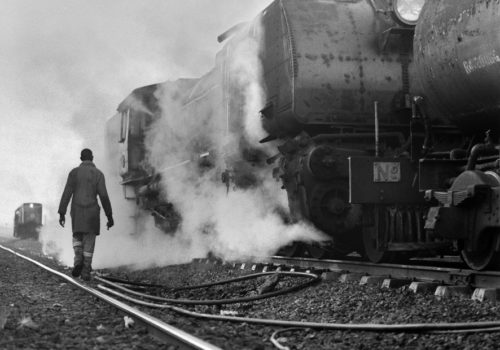 From Eritrea to Sri Lanka, from the Carpathians to Patagonia or Zimbabwe, and to the far reaches of the Gobi Desert, the Italian photographer Pietro Pietromarchi has traveled the world to capture the last breaths of an endangered species. : that of steam trains. Faithful to film, black and white, and his manual Hasselblad 6×6, he delivers to us in square format, without cropping or retouching, timeless images where fulminating locomotives appear like fantastic creatures in breathtaking landscapes. On the occasion of the publication of his book Steam Power (Editions Lienart), prefaced by journalist and art critic Bénédicte Philippe, Galerie Minsky is organizing an eponymous exhibition featuring a selection of his best photographs.

Pietro Pietromarchi pursues an emotion. That of the five-year-old child who, walking with his mother in the Dolomites, hears the ringing of the level crossing and sees “a foaming beast screaming through the pines” springing from the forest and whose driver waves his hand to  him. At the age of nine, when offered an Instamatic Kodak, he returned to the scene in an attempt to immortalize the scene: it was his first photograph. This image, taken in 1974, is one of more than a hundred photos reproduced in the book Steam Power. All the others come from series produced between 2014 and 2019.

Pietro Pietromarchi comes from a family of esthetes where everyone practices an artistic discipline, an activity which remains mostly confined to the private domain. Without ever departing from his double passion for trains and for photography, he embraced a career as an architect of which his impeccably structured images bear strong traces.

At the confluence of art and documentary

It was a sense of urgency that gradually transformed what he thought was a hobby into a project at the intersection of art and documentary:

“I became aware of the imminent disappearance of steam trains, so I spent all my free time photographing them, in places that were often improbable and difficult to access,” he explains. He began to exhibit his images in 1999, in Italy. Spotted by the Parisian gallery owner Arlette Souhami (Minsky gallery) – who exhibited his pictures in 2013 and 2015 – encouraged by the American photographer and painter Richard Overstreet, he continued his approach with ever more resolution.

A romantic vision of achievement

A purist, Pietro Pietromarchi only works with film, with a camera whose settings must be made manually: “For him, writes Bénédicte Philippe, this manual mode, like that of the artisanal development of prints, stay close to the soul of the golden age of steam: the quest through effort, relentlessness. A certain romantic vision of achievement . Whether it’s waiting for hours for a clump of clouds to fade away, a shower of sparks in the dead of night. And the miracle happens. Often. Without cropping in the end or retouching. Despite road accidents, interdictions, bad weather, photo equipment damage. “Many disappointments that Pietro Pietromarchi recounts in Steam Power, through the captivating stories that accompany his images, and which he wrote from his travel diaries (with the help of Bénédicte Philippe for the French version).

End of the story

“Steam locomotives are like living things. It takes around 8 hours to set them up and not one is the same, each has its own personality, all the railway workers will tell you, ”emphasizes Pietro Pietromarchi, before giving one after the other the names of those he knew had reached their final stop after he had immortalized them. Their plume of steam vanished, but he accomplished his plan. With his images in infinite shades of gray, which magnified these metal titans and the men who served them, he splendidly paid homage to the “howling beast” he saw pass in his childhood and to the friendly driver who had greeted him. The artist, who has definitively given up his career as an architect, nevertheless pursues his quest, while devoting himself to another passion: mountain photography.

Pietro Pietromarchi was born in Venice in 1965 and now lives in Brussels. A graduate of the prestigious Polytechnic of Milan, he is an architect by training. He practiced this profession in Italy before flying to Ahmedabad, India, where he worked with the famous architect Balkrishna Doshi.

Driven by a passion that began as a child, he travelled around India by train in his spare time to immortalize the steam locomotives that still circulate there. He exhibited his photographs in Milan in 1999, then in 2000.

In 2001, he moved to Belgium, where he began a career in real estate, while continuing his research around the world for the last steam trains. It was exhibited in Brussels in 2006 with the support of the Istituto Italiano di Cultura, then in 2013 on the occasion of the Accessible Art Fair at the Minsky gallery, which in 2015 organized a solo show in Paris.

In 2021, he released the book Steam Power (Éditions Lienart) and an eponymous exhibition was organized at the Minsky gallery in Paris. The same year he gave up his real estate activities to devote himself to organic farming and photography. He continued his project on steam locomotives and initiated a new project on the mountain.