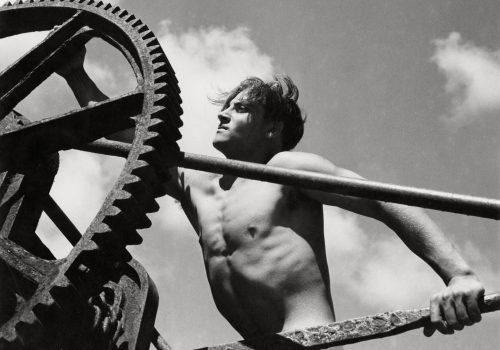 Galerie Karsten Greve presents Herbert List. ITALIA, his first exhibition dedicated to the work of the German photographer in collaboration with his estate. This highlights a large selection of photographs taken in Italy between 1933 and 1961, allowing the French public to rediscover the work of the artist, rarely presented in France since his major retrospective at the Museum of Modern Art in the city of Paris in 1983.

The work of Herbert List (1903 Hamburg – 1975 Munich), whose artistic approach was shaped by the European avant-garde, is part of the pure tradition of the 1930s, combining the formal rigor of the Bauhaus and the magic of the surreal inspiration. Often referred to as a “photographer of silence” 1, remains, bodies and places are major inspirations, distilled throughout his work: through the destroyed Munich of 1945, in the footsteps of ancient Greece and around many escapades during which Herbert List immortalizes moments of life. It was mainly through these trips that he discovered Italy in the early 1930s, a country with which he had a very special relationship.

Classical art and architecture as well as Greek mythology are subjects which fascinated List long before his discovery of photography in 1930. In 1936, he left National Socialist Germany and went to London, Paris and Athens . He regularly crosses the Alps in order to soak up the southern sun and satisfy his interest in art history by making short visits to Venice, Florence and Rome. He is passionate about the beauty of light and Mediterranean contrasts that he will never stop exploring: the Greek islands, Italy, the south of France or even Spain and Morocco are all stages that will shape his art. Shadow, more than light, will be of capital importance in his research. In fact, Herbert List transforms objects and people by creating his own enigmas, for example in the work Shadow of David, Italy, Florence, 1934 or in Youth in front of Roman bust, Italy, 1949. Geometric bodies, Shadows and reflections then become the subjects of formal experiences and the use of double exposure creates new spaces, sort of magical dreams devoid of a temporal dimension, to which the surrealists attributed great importance.

Gradually, Herbert List moved towards a more spontaneous photograph, the starting point of which was the View from the Window series of 1953: following a foot injury, he locked himself in the apartment of his friend, the photographer and executor of his estate, Max Scheler, located at 65 Via della Lungarina in Rome, in the district of Trastevere. He borrows a Leica 35mm camera and sits in the window, capturing scenes from life, influenced by Henri Cartier-Bresson met at Magnum, and the neo-realism of Italian cinema. He will work alongside director Vittorio de Sica on the film Stazione Termini the same year and will meet writer and filmmaker Pier Paolo Pasolini, whose writings resonate closely with his stereotypes. These photos of Rome from the 1950s capture moments that List would describe as “defining.” The still lifes give way to children’s games and the surrealist decorations fade away with the city’s trompe l’oeil.

From then on, Herbert List multiplied photo reports and became interested in documentary photography. In 1950 and 1951, he had already traveled to Milan for a project on the Casa Verdi, then to Palermo to produce a series on the catacombs of the Capuchin Monastery. He will continue by photographing, among other things, the Mannerist gardens of Palazzo Orsini in Bomarzo and scenes of tuna fishing on the small island of Favignana in Sicily. The peak of this documentary work was reached at the end of the fifties, when he wandered the streets of Naples, then in the middle of the shooting of another film by Vittorio de Sica, The Last Judgment. He photographs all the people who catch his attention and they will then be interviewed by de Sica. The result was Napoli, a landmark work published in 1962 in which the pictures capture the lively and confused atmosphere of the city. This offers an almost cinematographic body of images that dissolves the border between artistic photography and documentary photography.

An eclectic mix of places, characters and staging, Herbert List’s Italian impressions are therefore both a mosaic of past and present, of art and of life.

Born in 1903 into a bourgeois family in Hamburg, Herbert List’s adolescence was marked by the debacle of 1918 and Hitler’s rise to power in 1933. Even if he was not politically involved, the advent of the 3rd Reich suffocates his daily life: Jews and homosexuals are the first targets of the regime, forcing the artist to consider himself the enemy and to leave his country in 1936. The coffee trade of his parents allows him to traveling through Brazil, Mexico, El Salvador, Costa Rica and the United States, where he learns languages ​​and opens up to new cultures. Between the wars, Herbert List immersed himself in the cosmopolitan culture of 1920s Germany, where Bauhaus, Expressionism and Max Reinhardt’s theater coexist. In 1930 he met the Bauhaus master, Andreas Feininger, who introduced him to the art of photography and gave him his first technical advice. He suggested that he use the Rolleiflex camera, which has a film of only twelve prints, which will prompt him to focus on composition rather than speed of execution. In 1937, List divided his time between Paris and London, where he met Jean Cocteau and photographer George Hoyningen-Huene respectively. He dabbled in fashion photography and published in the pages of Harper’s Bazaar and Vogue, but without enthusiasm. He prefers to concentrate on what he will call “Fotografia Metafisica” by composing impeccably constructed still lifes, reminiscent of the work of Man Ray, Max Ernst and Giorgio de Chirico. He will also carry out throughout his career many portraits including those of Giorgio Morandi, Pier Paolo Pasolini and Marino Marini, among others. From 1962, Herbert List abandoned photography and devoted himself to his collection of drawings by Italian Masters. He died on April 4, 1975 in Munich. His works are part of many collections including those of the Museum Ludwig in Cologne, the Museum of Fine Arts in Boston, the Metropolitan Museum of Art in New York, the Kunsthaus Zürich or the Picasso Museum in Paris. Herbert List has been the subject of numerous exhibitions, notably at the Museum für Kunst und Gewerbe in Hamburg and at the Kunsthalle Nürnberg in 1976, at the Museum of Modern Art of the City of Paris in 1983, at the Musée de l’Élysée, Lausanne , in 1996.