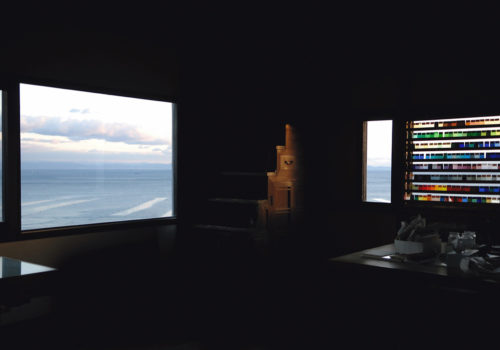 The artist deploys for the first time the raw material of her photographic work at the Ceysson & Bénétière gallery in Paris. What she calls her “latent images” and which constitutes a collection of more than ten years of works.

The object is placed in the middle of the space, resembling a sort of totem pole which shows how precious the unveiling being carried out by Aurélie Pétrel is at that moment. What she nicknamed her “fallow piece of furniture” has been the centerpiece around which all her work has been revolving since the mid-2000s. This storage box allows the artist to shelter her prints once they have been made. and she let them sit until she uses them in an exhibition project. In recent years, she drew from it here and there and then often put the chosen images to the test of plastic work, sometimes sculptural, in which the bodily dimension was also important to her. This time, she is exhibiting the very material that she used for these past works, the 1,200 photographs gathered in this piece of furniture, part of which is displayed on the walls of the gallery. These are mainly moments of travel (Japan, China, Lebanon, etc.) by an artist who defines herself as a “nomad” with “points of attachment”. There are human encounters and unique landscapes.

The formula “latent images” developed by Aurélie Pétrel to define these photographs finds its origin in this uncertain time when a photographer does not yet see the result of her shooting and expects to discover, in a kind of excitement or anxiety, a somewhat diﬀerent reality – an image “neither quite the same nor quite another” to use Paul Verlaine’s famous line. The artist was very early interested in this dimension of photography, insisting on always imposing this moment of pause between the shooting and the observation of the result, and that with a film camera or with a digital camera , and even for that matter when she happens to use a cell phone.

For her, the instrument of photographic capture does not matter as long as the eﬀort is made to wait and thus letthe magic work of a later discovery, the only one capable of giving the possibility of cutting through the mass of photos taken and to know which images can be designated  as“latent” and then shown to the public.

In order to convey the importance of this protocol, the artist as well as the curator of the exhibition and art critic Étienne Hatt have decided to exhibit the photographs in small groups, without frames, as if they were enlargements of fragments of contact sheets, thus restoring strength to the preciousness of the photographic act and its revelation in the eyes of everyone.