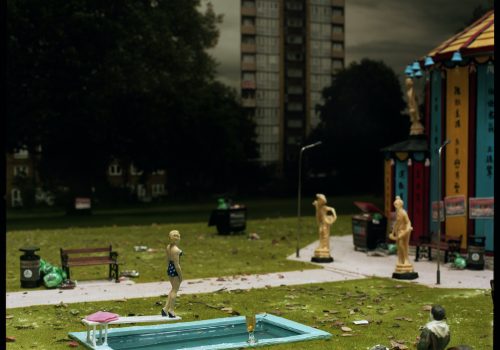 Etienne Clément‘s exhibition Les Fêtes Galantes at London Fields has been canceled. It will probably take place in June (dates to be confirmed).

In 1774 Francis John Tyssen, Lord of the Manor of Hackney did what most young men from his social rank did at the time: the Grand Tour. On his return, he decided to spend a few months in Paris to experience its joie de vivre. He soon became a regular guest at the fashionable fêtes galantes – lavish outdoor parties set in the vast, luxuriant parks in stately homes and châteaux that surround Paris. Chantilly was one of his favourite with the Grandes Ecuries (the Great Stables) nearby. His host, the Prince de Bourbon-Condé had recently made improvements in the park adding an Anglo-Chinese garden. A great collection of Chinese plants was brought back from the East to help make this area as authentic as possible. It featured a stunning Chinese pavilion, in which the Prince of Condé would organise very ‘gallant’ parties with his close friends and mistresses.

Francis John Tyssen was so impressed by the un-inhibited behaviour of the French that upon his return to London, he decided to have his own Anglo- Chinese garden in London Fields with a Chinese pavilion built to host similar events. At the time, Hackney was the largest parish in the county of Middlesex, favoured because it was close to the City of London and had been home to wealthy Londoners from the Middle Ages to the 19th century.

Sadly Tyssen’s daring plan was not met with great enthusiasm neither by local farmers – London Fields had been used as a thoroughfare as well as to graze livestock for centuries – nor by religious groups and following the first grand opening event, the Pavilion was mysteriously destroyed by arson. London Fields returned swiftly to its original use. Tyssen died shortly afterwards.

No record mentions the short existence of the Chinese pavilion and its garden in London Fields. However in the archives at the Chateau de Chantilly, a set of beautiful drawings of the Chinese pavilion has been found as well as a document detailing attendance to the 1776 season and which refers to a shy, discreet English gentleman who went by the name of the Lord of the Manor of Hackney.

London Fields is the Chantilly of 21st century London, with young desirables flocking to East London over the last decade. After two centuries of neglect – the wealthy moved West – London Fields is today rapidly becoming an affluent and very desirable place again – in fact what it was in the 18th century, its proximity to the city an influencing factor. It no longer has livestock as it use to when Francis John Tyssen was alive in the 1770s. Instead it is now a recreational and leisure park with numerous sport facilities. In the summertime an interesting social phenomenon takes place: Londoners – mostly young and beautiful hipsters, some in fact resembling characters from the Commedia dell’arte – congregate. The place rapidly turns into a hedonistic park of bacchanalial barbecuing, drinking, pill popping, loving, DJing, dancing… till the early hours of the morning. The ‘Season’ usually starts mid-April and can stretch to mid-October if the weather stays clement.

A summer weekend amongst the beautiful revellers has the same air of denial and frenzied enjoyment that their French predecessors once invented – in the same way that Marie-Antoinette controversially pretended to adopt the way of ‘simple’ folk, the wealthy and privileged have created their very own delusional hameau of warehouse squats and artisanal pursuits.

The series merges Tyssen’s dream of recreating the ‘esprit’ of 18th century fêtes galantes in his back garden with today aestival congregations of beautiful hipsters in London Fields.

Tyssen’s London Fields Pavilion is erected and placed where it use to stand. It not only serves as an object of pleasure, relaxation and mystery, drawing people in just like those of Chantilly, but it also act as a symbol, in its transience and the environment it creates, for the ‘pop-up’ culture that has come to define this particular demographic of Londoners.

Frances John Tyssen’s dream may have been short lived, but in the modern day, the pursuit of pleasure, even in the face of economic upheavals and other X-it nasties, has gained an almost political significance echoing that of 18th century Chantilly, making it a poignant moment to rebuild his pavilion and complete the tableau.