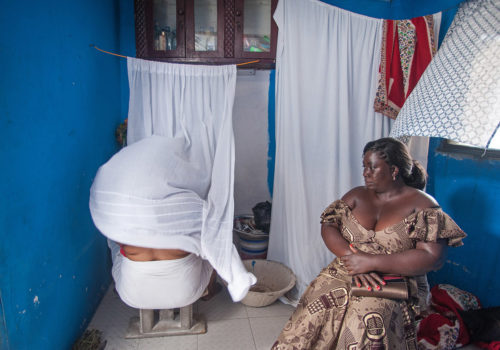 For its next major annual exhibition, the Abbaye de Daoulas invites the MEG-Ethnography Museum of Geneva with “Africa. The religions of ecstasy”. This exhibition offers a trip to Africa, to discover the religious cultures of this continent; a real plunge into an atmosphere of mysticism and discovery of the fervor of believers. Faithful to its vocation to take up major social issues, including the most sensitive ones, the Abbey of Daoulas takes up the challenge by choosing to approach the religions in Africa, to show the plurality of their practices. An exhibition of international scope, unique in Brittany.

Through numerous objects of worship and works of art, the exhibition reveals the richness of African religious practices. Religion is defined here as a set of rituals linking the living to each other, facing the powers of the invisible: single god, multiple deities, spirits of ancestors or nature.

Africa is seen as a cultural space more than a geographic one, these religious practices being found even in the Americas and Europe where they have been widely circulated by the diaspora.

Nearly 200 pieces from the MEG’s collections, mostly never seen before, are enriched by the fascinating images of five contemporary photographers: Johnathan Watts, Jacques Faublée, Christian Lutz, Fabrice Monteiro and Anthony Pappone. The spotlight will be given to testimonials through a series of short filmed interviews presenting the point of view of the followers themselves. Video installations by a video artist, Theo Eshetu, punctuate the journey by revealing the notion of the sacred in indigenous African religions.

“From this overview of African religious practices emerge a number of lines of thought. Although the choice of examples is necessarily fragmented, it reveals the great diversity, complexity and dynamism, often misunderstood, of religions in Africa and in the African diaspora.” Boris Wastiau – Curator of the exhibition

An exhibition of the MEG, Museum of Ethnography of Geneva adapted for Heritage Trails in Finistère
Maël de Calan, Chairman of the Board of Directors of the public establishment for cultural cooperation Chemins du patrimoine in Finistère