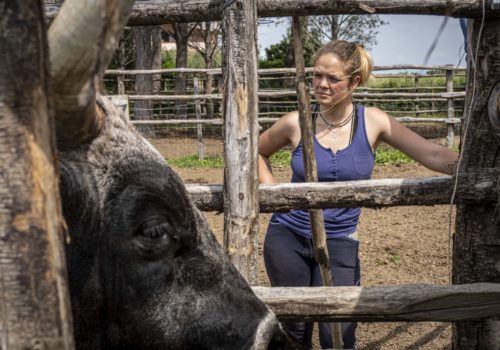 Gabrielle Saveri is a photographer, writer and artist based in California’s Napa Valley. She has worked as a journalist in the United States and abroad for news and media organizations / publications including Newsweek, People, In Style, Business Week, National Geographic’s Green Guide, Who Weekly, the International Environment Reporter, The Washington Post, Travel & Leisure, the San Francisco Chronicle, and Thomson Reuters News Agency. She has also written and produced television shows for networks and organizations including The Travel Channel, Discovery, Lifetime Television, Nickelodeon, the Fox Family Channel, and UPN.

Her current project “I Butteri della Maremma” is a series of photos taken from 2013-2019 depicting Italy’s “cowboys,” known as the butteri, a group of indigenous cattle breeders and horsemen and women whose origins are said to date back to Etruscan times.

The project stemmed from her fascination with the butteri, whom she had heard about for years while working in Italy as a reporter. Saveri, who is Italian-American, has visited Maremma, the region spanning from northern Lazio to southern Tuscany, every year since 2013 to document buttero culture, which is now threatened.

There are currently only a handful of authentic, working butteri left in Italy who employ the ancient mestiere, or craft of the cowboy, raising distinctive maremmano cattle and horses.

Saveri was drawn to the rich and historical culture of the butteri as well as the beautiful light and landscape of Maremma. Saveri’s project focuses on the image itself rather than the visual narrative.

Her works are portraits of a people – the working cowboys themselves (and more recently, the women of the region who are for the first time ever being offered training and work opportunities on the traditionally male-dominated cattle ranches), and the appassionati (the devoted followers of the cowboy tradition who have fallen in love with the culture), donning traditional buttero clothing and embracing ancient traditions in the hopes of keeping Italian cowboy culture alive.

Saveri has exhibited her current work at the Italian Cultural Institute in San Francisco. Solo photographic exhibitions are also currently in the works with two leading American art museums.

Lanza: How did you obtain access to start the photographic work with the Italian Cowboys (Butteri)?

Saveri : I basically just showed up. I love horses and had heard about the butteri while working as a reporter in Italy during the 1990s. Perhaps because I’m Italian-American, I had this dream for years to go ride with the Italian cowboys, but I didn’t know how to find them. In 2013, a serendipitous meeting led me to the butteri’s headquarters. I travelled by plane, train, bus, and finally, bicycle to join the daily morning work ride with the butteri. We spent four hours on horseback racing around the hills and trails and ended up at a beautiful beach on the Tyrrhenian Sea. That was my entrée to start photographing the butteri. In 2014, I went back and photographed the 1st National Raduno or Rally of various groups of butteri in Italy. Since that time, I’ve returned to Maremma every year (except for last year because of the pandemic) to focus on different aspects of buttero culture.

Lanza: What are the origins of the Italian Cowboys, did any of them migrate to the American West?

Saveri: I’m not a historian, but from what I have learned, the origins of the butteri are believed to date back to the spread of agriculture during the Etruscan times. Buttero culture was born in Maremma, the region spanning from the Pontine marshes and plains of Northern Lazio to Southern Tuscany and the coast along the Tyrrhenian Sea. At the turn of the 19th century, Maremma was known for its bandits and swamps filled with malaria-carrying mosquitoes. When Mussolini came to power in the 1930s, he drained the marshes and assisted in eradicating much of the malaria in the region. In the 1950s, the Maremma Land Reform Agency continued the work draining the swamps, and also built new farms, roads and agricultural structures. With the swamps gone, the butteri were no longer able to work the land as in the past, and over time, some migrated North, forming new communities outside Grosseto, Maremma’s capital.

Lanza: What are they famous for and how do they keep the ancient traditions alive?

Saveri : The Butteri are famous for their special breeds of maremmano cattle and horses. Maremmano cattle are grey in color, robust in size, and they have long horns. Quality maremmano beef is raised organically and is sold to wholesale markets throughout the region. The butteri also raise their own special breed of maremmano horse, a heavy set, muscular and strong horse, frequently black or bay-colored, often used for working on the farms, light draft work or general equitation. The butteri are very proud of their cattle and horses, and host rallies, shows and events throughout the region to help promote their history and culture. The butteri are also known historically for competing against Buffalo Bill and his cowboys at a rodeo held in Rome in 1890. To this day, there is amicable disagreement as to who won the competition.

Lanza : Discuss the type of riding and gear.

Saveri : In terms of gear, the Butteri are known for their special saddles – the Scafarda (a military-style saddle used primarily in Tuscany), and the Bardella (a heavier framed saddle with Renaissance origins, found mostly in Lazio). The butteri generally wear a specific type of work clothing unique to the region – earth-colored cotton shirts and trousers in the summer, and in the winter, hunting jackets or gilets — along with brown leather boots and gaiters. In the summer, the butteri sport straw hats to block out the hot sun, and in the winter, dark-brown fedoras. Butteri traditionally carry a hooked hand-carved wooden stick when they ride called an uncino, which is used to herd cattle and open and close farm gates. Working butteri spend long hours in the saddle herding and moving cattle and horses. The appassionati, or devoted followers of buttero culture, often ride in shows and events all over Italy showcasing their riding and herding skills.

Lanza : What are you looking to do with this series?

Saveri : I would like to show my photographs at museums and other venues in the United States and abroad. I am currently discussing possible exhibitions with the Buffalo Bill Center of the West for 2022, and the National Cowboy & Western Heritage Museum for 2023. I am also looking to connect with a book publisher who would be interested in showcasing my photographs to help preserve and document the rich culture and historic traditions of the authentic butteri, whose world now is now rapidly disappearing.