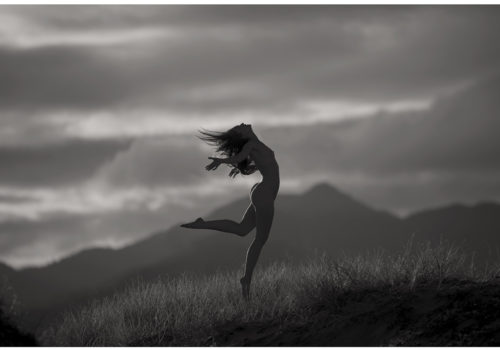 Andrew Macpherson, photographer, author, and artist was born in London and currently resides in Los Angeles, California. His career as an award-winning photographer and artist has spanned more than thirty years. Traveling the globe, Andrew has photographed many of the world’s most celebrated and iconic musicians, models, actors, and designers. His book publications include; Two Million Miles, A Question of Spirit and PINK (a collaboration with the musician and artist over a ten-year period).

By his mid-twenties he was a regular contributor to magazines such as Rolling Stone, The Face, Elle, Bazaar and Vogue. His passion for photography and the darkroom process led him to become a master printer, its chemical footprint created a great deal of inner conflict as both an artist and a life-long environmentalist. He quickly embraced the digital revolution and created the first digital front cover of a fashion magazine for Elle in the UK in 1991.

He is currently collaborating on a several personal projects; including a photographic representation of our planet, called The Crucible of Life and Pagan Spirit shown here, which is an exploration into the romanticism of pictorialism. In meeting, Joanna Hadfield who had been dancing since she was four, he found the perfect partner to create both the poems and the photography. In ancient times watching the Temple Girl dance would have been a reverential experience and sacred connection to the Goddess of Creation.

Patricia Lanza : What was the inspiration for your authorship of the work, Pagan Spirit ?

Andrew Macpherson : I first learned about the Goddess religions of the ancient Mediterranean as a boy exploring the ruins of their temples in Malta with my grandfather, who lived there. I was fascinated by those mysterious monuments built to long forgotten deities, and the idea that both they, and the civilizations that worshiped them, could vanish. Some years later at school I discovered the writings of Robert Graves, who brought ancient temples to life. Watching a girl dance at the temple of the goddess would have been a reverential experience and being chosen to be a ‘Temple Girl’ was the greatest honor. Under the tutelage of the High Priestesses an initiate would have been taught how to use her powers to beguile and captivate men, keeping them devoted to both the Goddess and her temple.

When I fell in love with photography at thirteen, I was deeply moved by the work of the Photo Secessionists and the pictorialist disciplines of classical painting they followed. My favorite work from that era, Anne Brigman’s Song of the Pagan (published 1949) has long been one of my most treasured books because her work so reflected my childhood vision of how a dancer at those pagan temples might be. I had always wanted to do an homage to it, and in meeting, Joanna Hadfield, a competition dancer since the age of four, I found the perfect partner to create it.

PL : How did the collaboration with Joanna Hadfield come about?

AM: I met Joanna Hadfield, a New Zealand native, when she was working with the singer Kimbra, a fellow kiwi, who I was photographing. During the shoot I told Joanna about my dream to create this book. She told me about her history in dance, about the landscapes in New Zealand where her family had farmed the land for six generations, and said she’d do it with me. We met up in New Zealand some months later and shot there for two weeks in their summers of ’15, ’16 and ’17. She created some the poems during the first shoot, and I knew then I wanted to include them.

PL : Describe the process and production for the project?AM: The total shooting time was around seven weeks, spread over three southern hemisphere summers. The gathering of the pictures took time as the locations were all very remote and even in summer the weather there is very changeable down there, so it was very much a case of be prepared, waiting, and then jumping into action as the light came right. We rented a motorhome for one of the trips and house for the other two, which gave us a good variation of location, but around half the images were done in the area Joanna’s family had farmed the land for six generations.

PL : What are you looking to accomplish, a book and an exhibition?

AM: My dream would be for it to be both an exhibition and a book.

PL : What are you presently working on?

AM: I’ve recently finished a project called TRINITY: THE CRUCIBLE which is a series of 140 images of discarded objects reflecting the crucible of life on earth, the land the sea and the air. I’m currently also working on an exhibition with LA artist Onik Agaronyan showcasing his art and process and with Hudson Properties documenting the transformation of the old Westfield Mall into Google’s new LA offices.