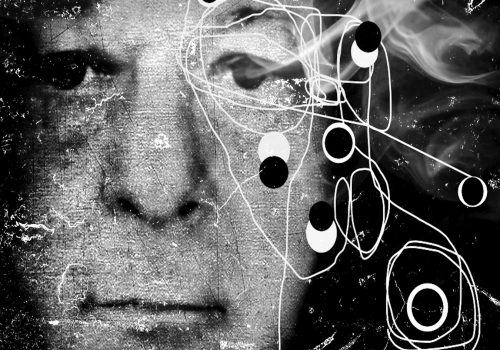 Eighteen ways to show me on camera

The self-portraits gathered in this corpus were made or redone between 2019 and 2020 and are part of digital photography. As in all my production, the self-portrait is accentuated on the capture of my face and spontaneous facial expressions that appear in front of the camera. My work is driven by the intention to surprise me. Or to see emerging from my face, on the screen, an unexpected, cloudy, anxious image, a delinquent attitude, an unexpected pose, a blank or aggressive look, an image distorting my features, until then, never perceived as such or forgotten from my memory. In other words, I want to make my self-portraits a way of being present in the world with a face, which although it is mine, really distances itself from it.

My self-portraits do not respond to the traditional ethics of resemblance in photography. Rather, they are developed in the creative freedom to bring up images of my face that are not a true copy but that manifest as so many strange images of me. Strangeness, a Freudian concept, is my guiding artistic leitmotif and I use this word as a gap with what is known, ordinarily experienced, what is disturbing. When I photograph myself, I am in the intoxicating present of creation through the frantic and chained succession of shots. Thus, my facial representations are images whose aesthetic is inscribed in the almost absence of staging, in very tight framing, and where I rarely show myself as I am at 69 years old (No 4) or even more old (No 16-17) and even very old and dying (No 18). Voluntarily, these are strategies of derealization which have an impact similar to that of the mask which I use to distance myself from the resemblance and create an effect of strangeness. What fascinates me first is to create meaning, a critical sense, one that challenges socio-political data that fall under the values ​​associated with common sense of the dominant ideology.

From this perspective, madness (Nos 1-2 and 4-7) is the founding purpose of the meaning on which my self-portraits are built. I make no effort to represent madness: it is an intrinsic part of my family culture and it crosses as much the singular being as the collective in this universal period of hysterical decline of hyper-spectacular capitalism which digs deeper and deeper inequality. Likewise, madness runs through daily violence, becoming a man, that is, the normative way of overvaluing the stereotypes of masculinity which associate it with control and power, the culture of rape, the cruelty of wars, human displacement , religious fanaticism. Or contempt for everything that is different, such as the traumas I have suffered since childhood and which are associated with my gay identity, traumas which also affect racial minority groups, women and LGBTQ cultures who postpone in question the identity definitions of gender (s) strongly criticizing the political dimension of hetero-normativity, .etc. Madness is everywhere and it is very malicious. This is where this artistic attraction for the culture of the strange, the strangeness, what is out of the ordinary, what is rejected comes from.

By trying to surprise myself and enter the world of strangeness, I make self-portraits that are like appearances of my face but that are unknown to me. I sometimes wonder if, for the spectator who doesn’t know me, my self-portraits don’t become portraits? Regardless, the viewer is always right and the artist is never absolutely fixed, frozen, in the sense. So, I make a final statement: if my self-portraits exist as artistic visual documents I consider that they constitute a legacy also acting as “delinquent speech” on my difficulty of being in the world. “Delinquent word” because through photography I am reborn, I reinvent myself every day by reappearing, because I constantly want to see myself, to see myself again, crossed by the desire not to disappear, even alienated by the inevitable fact of death.