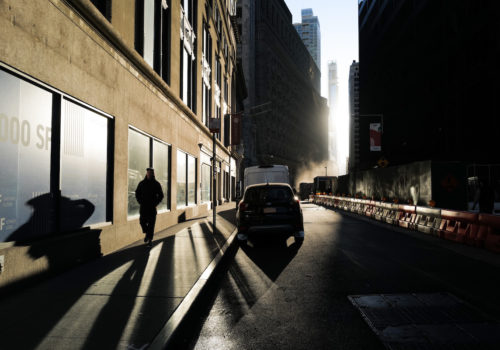 Wonderland is a photo book featuring New York and its inhabitants. Under the offbeat, tender and satirical eye of photographer Cedric Roux, fascinated by New York and America since his youth, the unusual scenes are composed within the framework of his camera. Prefaced by Matt Stuart, the book in 19 x 27 cm format, in the French style, is intended to be vertical like the city of New York. The raw and refined design is produced by the artistic director William Keo, also a Magnum photographer, and serves to highlight the dynamics of Cedric Roux’s work. The book presents 60 images printed in France by the Escourbiac printers in four-color offset on Gardapat 13 Bianka 150 g/m2 paper. The cover is cardboard and lined with a pine green fabric reminiscent of Manhattan signage.

Cédric Roux is the winner of the “Éditer son regard” competition sponsored by the printing company Escourbiac, Initial Labo, Revue Epic and Wipplay. His first book Wonderland is presented by the French publisher-printer duo Odyssée-Escourbiac. Through this first publication Cedric Roux shares his satirical gaze and his love for the streets of New York.

The author
Since he was 18 years old, Cédric Roux has been passionate about America and photography. Coming from a family of sportsmen, it is in photo books that he feeds on travels and images. It was only at the age of 30 that he took the plunge and flew to New York with a camera in hand. This first trip helped him overcome his shyness and take the step of taking pictures in the street. On his return from his second trip to the United States, he no longer put down his camera and continued to practice street photography. Since then, Cédric Roux has won the Zooms 2018 public prize at the Paris Photo Fair as well as numerous publications. He has also won international prizes and seen his images exhibited in Paris, Japan, Miami, San Francisco, Milan and Arles, but also at the ICP in New York and on the RATP metro platform. He also collaborates on a regular basis with Leica France and had the opportunity to exhibit a series of photographs for nine months in one of their Parisian gallery.

The publishing house – Odyssée
Wonderland is the first book to be offered this year by the French publisher-printer duo Odyssée-Escourbiac, a traditional house that now wants to be avant-garde. The book will be printed in April 2022 then presented in preview to the contributors of the fundraising campaign in June 2022 then in Arles in July 2022. It will be officially released in bookstores in September, distributed by their partners Art & Paper. An exhibition circuit is to come, in Paris, Marseille, Geneva.