Best Of 2021 : Charles Nègre : The Pioneering Humanist by Michel Cresp 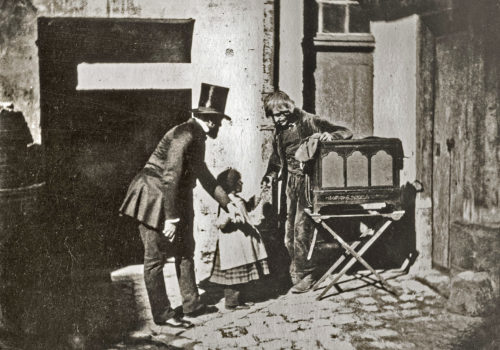 For 12 years, from 1850 to 1861, Charles Nègre lived at 21 quai Bourbon in Paris. At the time, Île Saint-Louis was not today’s upscale neighborhood. The 17th century mansions are certainly present there, but also artisans, artist workshops – Honoré Daumier is a neighbor at 9 quai d’Anjou – and even factories, a laundry …

From 1851 Charles Nègre photographed the small trades of his entourage: the organ player, the coconut merchant, the chimney sweeps, the stonemason, the street musicians, the little ragpicker, the mason, the market. He shows special attention to these humble people. He seeks the poetry of the world in simple things, everyday situations, life. The technical conditions of the time often required posed positions, but these street scenes are particularly sensitive, today we would speak of the premises of “street photography”.

“It is Nègre’s training as a painter that explains his taste for the genre scene, his first attempts in this field, it should not be forgotten, were conceived as studies for his paintings. If he is not a precursor, Nègre can be considered as the master of genre photography because while bringing it to its point of perfection, he sought and found for photography a language of his own, that of the natural.

(…) In seeking the translation of the snapshot, Nègre was the first to sense what the very essence of photography was, and thereby he prefigures (…) certain images of Atget, and even more Lartigue, Cartier-Bresson and Doisneau. ” [Françoise Heilbrun in “Charles Nègre photographer, 1820-1880”]

The Imperial sanctuary in Vincennes, near Paris, is a special chapter in the work of Charles Nègre, and it is one of the first reportages. This sanctuary today it looks like a hospital  is the will of Napoleon III to accommodate convalescents, workers injured on government sites or in factories. The urban planning of Baron Haussmann multiplied the work in Paris, and therefore the accidents. The sanctuary was built starting 1855 and Charles Nègre made his first shots in 1857. The album which came out in 1860 is a folio of 11 plates 48 cm x 62 cm each comprising either a single oval photograph, or two photographs in tondo. For the emperor it is a communication operation on his social work. For Charles Nègre this state commission is an opportunity to deploy all his sensitivity in a complete story.

He photographed architecture and gardens, but above all the functioning of a community. With chiaroscuro light effects Charles Nègre brings the marvelous to a place that is all in all pain and silence: bedrooms, library, playroom, refectory, kitchens, medical examination … Other views of the laundresses, of the pharmacy, as well as the portrait of the Mother Superior, do not appear in the album but in separate plates.

The technique evolved and these are short poses here, practically snapshots, and we can really speak of reportage, in spirit and in form. Charles Nègre, beyond his mastery of means, brings great humanity with his gaze and opens the way to social photography.