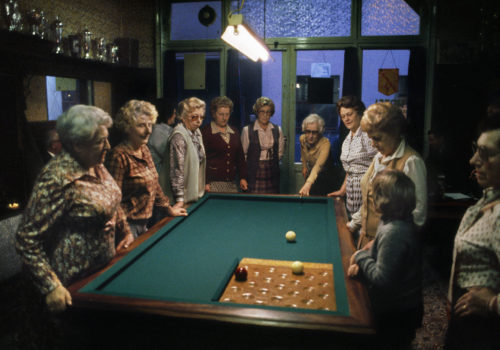 “Café Belgica”, is the new book of Harry Gruyaert published by FIFTY ONE gallery. Some prints from this series are displayed until the 10th of April in the Artazart bookshop, in Paris.

Beer is omnipresent in Gruyaert’s photos, interspersed with the odd coﬀee here and there and in one rare instance champagne. But look closer and you’ll notice there’s not a single wine glass in sight. In Belgium, people don’t drink wine in cafés. And there’s a good reason. Never order wine in a café, unless you’re up for an epic hangover the morning after.

A café is not to be confused with a tavern, a cafeteria, a bar, a lounge or a cocktail bar.

A café worthy of the name is a place where you drink draft beer. The beer glass is held at a 45-degree angle, filled 4/5ths full, then tilted upright and the tap swiftly closed. The bartender skims the head oﬀ the beer and then sets this little miracle in front of you on a beer mat. That’s the custom, that’s the way it’s always been done. As Belgians we are accustomed to compromises, but not when it comes to this ritual that has been elevated to an art form in our country.

Or should I use the past tense? Yes, unfortunately.

Because cafés and their wonderful customs are gradually disappearing from our streets. More than half have closed in the last 25 years. Fifty years ago, there were over 50,000 cafés in Belgium. Now just under 10,000 remain. Café Belgica, our heritage, is slowly fading away.

Did the photographer remain sober during his visits?

I think so. A photographer in a café, in a colourful throng of dancers, talkers, busybodies, jokers, kissers, know-it-alls, café philosophers, newspaper readers, billiard players, barflies… who all have one thing in common: they like a tipple.

Some with moderation, others with conviction.

I would happily spend time in each photo in Café Belgica. It is an invitation to share a light-hearted life. Can you think of anything better than spending time with good friends, random passers-by or beautiful strangers? Raising a glass to each other’s health is a sign of unconditional love.

The light is always on in Gruyaert’s photos. Sunlight, neon light, artificial light, the light of a flash, but never emergency lighting. Nobody is ever shown the door. No, let’s stay here together and quickly place a last order. One last drink to show us the way home and, go on, one last drink to life. Go on! Drinks are on me! And we’re oﬀ again. But we’re not going home.

Many of the men wear suits, often brown or grey. The women either seem to have forgotten certain colours or tend towards shades that beg to be seen, dabbling in combinations that would be banned by today’s fashion police. There are no rules, no hypes, no dogmas here. Café Belgica is a sanctuary for free spirits, bon vivants and matronly women. Suits, curtains, fur coats, perms, dance steps, dried sausages, trombones, leopard patterns, sweaty armpits… All part of the decoration and decorum in the arena of Emperor Promille.

I see no loneliness in there. Not even when someone is quietly reading a newspaper. Cafés are like a cathedral of social contact. You don’t pay admission, you can talk freely, and you can sit wherever and with whomever you want. At the most, you may be protected against yourself and public intoxication. Every soul is served by God behind the bar or by a Mary Magdalene at the table. Cafés are a place to make friends and the odd enemy. Just like real life.

We Belgians are used to seeing people have fun, get drunk, dance or do whatever else they please in this temple of emotions. To sober outsiders, cafés are an enigmatic territory, where a miracle potion is served. It’s Harry instead of Asterix in Belgium.

In all likelihood, the photographer had to leave his comfort zone to better understand it. Taking a step back to see the bigger picture. Leaving to arrive. It’s ironic that no other Belgian was able to preserve this culture as brilliantly as Gruyaert. I used the word preserve on purpose. Unlike wine, beer is not stored. It is consumed as soon as possible. Perhaps that’s why beer drinkers are so impatient when they’re thirsty.

And much like good wine tastes better with age, Gruyaert’s photos also improve over time. He shows us a diﬀerent world, that no longer exists, or barely. An era in which music emanated from the jukebox or the Decap organ, of packs of filterless blue Gauloises or green Saint-Michels next to the ashtrays on the tables. Gruyaert highlights the cohesion, the warmth and the fun that people had in these establishments, in clouds of smoke with the smell of alcohol wafting around. Harry shows what our little Belgium was so great at. Café Belgica is a national monument, like the Manneken Pis. In Belgium, drinking and peeing is a sight to behold, an attraction.

And even though our thirsty heritage is gradually eroding, like Grand Jojo we never stop singing:

Peter Fetterman  : The Collection on the Walls