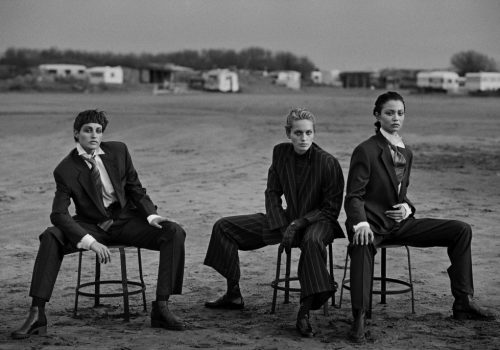 Heimat. A Sense of Belonging shows Peter Lindbergh’s unique sense of space and beauty and reveals the sources of his inspiration. Curated by Giorgio Armani with the Peter Lindbergh Foundation, the exhibition at the Armani/Silos in Milan discloses a three-section itinerary with the portraits of The Naked Truth, the potent ambiences of Heimat and theme of The Modern Heroine. A Sense of Belonging illustrates both the complexity and the directness of Lindbergh’s work and its sense of timelessness.

Peter Lindbergh and Giorgio Armani have been close collaborators since the 80s, both visionaries appreciating truth as opposed to artifice, both with a unique sense of identity and personality. “I have always admired Peter for the consistency and intensity of his work. Timelessness is a quality I personally aspire to, and one that Peter definitely possessed.”, Giorgio Armani says, adding that the author’s “love for beauty represents an indelible contribution to our culture, not just to fashion”.

So, let’s give the word to Giorgio Armani, who takes us inside the deepest meaning of the Lingbergh’s photography. “In German, Heimat has a much deeper meaning than “home”. It speaks of the place where your heart is, where you feel you genuinely belong. For Peter, this was the industrial city of Duisburg in North Rhine-Westphalia where he grew up, with its factories, fog, metal and concrete. This landscape lived with him throughout his life and meant that he could see the beauty in unusual spaces that others might consider stark or harsh or ugly, even. I think we all have our Heimat”.

When L’Œil asks Giorgio Armani about his own Heimat, he answers: For me it has become Milan, my adopted city, where I feel comfortable and at ease. The streets and the rhythm of life here are familiar, the architecture, the sounds, sights, smells. The people. The way the place looks and feels different through the seasons – our hot summers and cold winters. Here I recognise the rumble of the trams, the slapping of rubber tyres on uneven cobbled roads, the chatter in cafés where the smell of fresh coffee permeates. My eye appreciates the rigorous lines of the buildings, the pale stone, the imposing facades that often hide an intimate courtyard. This is the place I always come back to. Where I am at peace with myself and among my people. Though I have travelled the world and seen extraordinary places and met extraordinary people, my connection with this Italian city is so strong that on my return I always feel a sense of calm descend. A sense that I have truly come home”.

Born in Leszno, Poland, in 1944, Peter Lindbergh, considered himself a portraitist rather than a fashion photographer. Among his creative sources, there were Berlin’s 1920’s aesthetics and the realism of documentary photography. In his works, he introduced kind of new realism, focusing on the personality of the subjects, free from beauty stereotypes. This way he contributed to change the standards of the fashion photography of the time. As he pointed out, he considered Black and White photography as an interpretation of reality. A concept closely connected to his photographic mood, without filters or retouching in post-production, as can be seen in the Heimat exhibition. Lindbergh’s understanding of femininity, his interest in personality and proclivity for truth led filmmaker, author, and photographer, Wim Wenders to write: “In Peter Lindbergh’s portraits of women I see a search for truth: nothing more and nothing less”.

Lindbergh used to collaborate with magazines like as American and Italian Vogue, Rolling Stone, Vanity Fair, Harper’s Bazaar US, Wall Street Journal Magazine, W. He shot three Pirelli calendars, in 1996, 2002 and 2017 and also directed a number of films and documentaries.

On the occasion of the Heimat. A Sense of Belonging exhibition, Armani/Silos hosts its 11th Film Series (October 14th-November 15th), with a film selection curated by the Peter Lindbergh Foundation. The Film Series expands the narrative path of the exhibition through film productions by Peter Lindbergh himself, inspiring movies and authors who have forged ties of collaboration and friendship with the photographer. The common thread is the centrality of the female character, presented through an authentic gaze.

Heimat. A Sense of Belonging