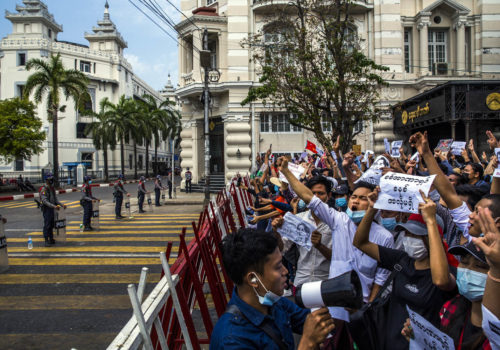 “Anonymous” Burmese Photographer twice honored, in Perpignan and Bayeux, is it the end of Burmese documentary photography?

When I first visited Rangoon in 1996, I was so naïve, I flagged down a broken taxi (you could see the road under your feet through the rusty floor plan), and excitedly told the young and festy taxi driver: “Take me to see Aung San Suu Kyi!”. I had been admiring “the Lady” for so long, I thought that was my chance to go  and pay her a visit. Little did I realize my futile attempt, when the taxi came to a screeching halt, turned back and sped away, as we saw the barbed wire with a tank and a bunch of soldiers guarding the street to her lake side house. Little did I expect that a few years later I would meet her face to face and guide her through photographer Lu Guang’s “China Pollution” exhibition at the Yangon Photo Festival. It was my privilege to sit beside her as member of the jury, and be impressed by her intelligence and poise, as she became the chairwoman of the jury for the Yangon Festival’s photo competition. I watched her being moved by the first pictures of the Rohingya villages being torched by Buddhist mobs. Then we all followed and watched her party winning landslide election through the numerous photo reportage across the country, the passionate and enthusiastic support of the population was so overwhelming. It was the first occasion for that Burmese photographers to learn to cover political campaign and mass rallies. But Daw Suu Kyi disappointed many of us when she sided with the military to deny the repression and the displacement of a massive population. Here was the price she paid : she won another landslide election supported by a majority of anti-Muslin Buddhist population. As she was heading to the parliament in the hope of amending the constitution, the military staged the February 1st coup d’état! Aung San Suu Kyi was detained under ridiculous charges. And once again the people of Burma rose up in protest, this young generation has seen the protest and demonstration in Hong Kong, and neighboring Thailand, they adopted the Hunger Game salute. Thanks to the photo-reporters, the images of these three fingers became the strongest visual testimony to resistance against the military dictatorship. The most poignant ones were of those protesters in silent sit-in and wearing mask printed with Aung San Suu Kyi’s face, raising their three-finger salute.

After a year of pandemic crisis, with confusing episodes of lockdown and reopening, the Festival of Photojournalism Visa Pour l’Image in Perpignan decided to attribute the most prestigious photojournalism award, Visa d’Or to an anonymous Burmese photographer, “anonymous” was an attempt to protect his identity and his safety. It was the editor of New York Times, for which these pictures were produced and published, who went on stage to receive the award. Barely a month later the Bayeux Festival of War Correspondents granted the Prix Nikon to the same anonymous Burmese photographer for his series “Spring Revolution”. Winning two awards for documenting the bloody and merciless repression should shame the power in place, will it help change the course of the dictatorship?

As this “anonymous” photographer told me, they had to get rid of their helmets with the mention PRESS, as soon as they found out that the soldiers were targeting precisely the people wearing such helmet. During the most intense two months, he had to duck between cars to escape the bullets, the soldiers were shooting live rounds, either because they ran out of rubber bullets or they decided to kill in cold blood.

Based on estimates by local organizations, the High Commissioner for Human Rights of the United Nations said in early October that 1.120 persons had been killed by the security forces during repression of the strikes and pro-democracy protest. Streets have been calmer now, the soldiers would identify and locate the sources of residents beating on pots and pans in protest, and would violently arrest them. “As the High Commissioner has already noted, there has been an established pattern of attacks by the Tatmadaw against unarmed individuals using lethal force, destruction of residential properties, mass arbitrary detention and deaths in military custody.”

In his own words, the “Anonymous” photojournalist narrates his personal experience: “Since February 1st, I have been on the streets every day, photographing protests, clashes and deadly crackdowns. I encountered many challenges in covering these events included working amid gunfire – both live rounds and rubber bullets, teargas, and stun-grenades, escaping from the military and police and hiding in random apartments, with the help of civilians. I had to move from one place to another in the evenings to avoid night-time search and arrests. On the afternoon of March 31st, as I went back to my car after photographing a group of peaceful protestors in downtown Yangon, two military trucks attempted to arrest us – one of the trucks hit my car to stop me from leaving while soldiers pointed their gun at myself and the other reporters inside my car. I was surprised but fortunately, I accelerated and went fast enough to escape the scene. The soldiers didn’t have time to shoot, and we escaped arrest.”

This “Anonymous” Burmese photojournalist is one of the most successful products of the Yangon Photo Festival created in 2008-2009 by Christophe Loviny, who has noted the amount of social, economic or environmental issues in this country that were undocumented, so he decided to create training workshops to train “citizen photojournalists”, to create “photo-essay”, telling stories with music and text and video, the camera is used as a political and social weapon, to push for change. Over the 12 years of existence the YPF has exposed a great number of never-covered before subjects and trained and formed a small army of photojournalists or concerned photographers, some of them working for local press or and even international photo-agencies.

Covering intensely the Spring Revolution over three months inside the protests and the crackdown forces, the Anonymous photographer demonstrated how closely he approached his “live subject”, like Robert Capa, your pictures are only as good as you are closest to the action. The captured pictures are equally reminiscent of the dramas and tragedies of the Hong Kong protests, as if there is a familiarity, a universal solidarity among the young generation of freedom lovers, and democracy fighters.

Let me share some remarks from the New York Times editor Mikko Takkunen:

“As I said in my speech in Perpignan, when I accepted the award on his behalf, I really salute his talent, integrity and courage. I worked with (the Anonymous) on a daily basis for around 2 1/2 months from Feb 1 onwards, pretty much until it became too risky to work at all. The work he made on a daily basis was tremendous (…) The photographs are very powerful on how they captured the mass protests, the clashes, the killings, and the sorrow, and making them often involved taking carefully calculated risks as well as empathy, especially when capturing families mourning for their loved ones. As the number of mass protests and later clashes reduced, it became much more difficult to photograph in the country. Both protests and clashes had provided a certain level of protection to journalists in that they were not drawing attention to themselves. When those stopped, it became more tricky for photojournalists be out and about with cameras. Even taking cell phone photos could be risky, so from mid-April onwards we did very little photography. And my understanding is that this is still largely the case, at least when it comes to anything seen as coup related.”

But I can’t help but wonder whether the mediatization of the double award this time, in Perpignan and Bayeu, honoring the Anonymous Burmese photographer would it further motivate the Junta into harsher repression against photographers and journalists? Now that Internet is cut off at will by the Burmese military and social networks banned or censored, would there be any more young Burmese “Robert Capas” ? Or will it be the end of Burmese documentary photography? We asked the same question about the Hong Kong democracy movement and protests in the years of 2019-2020, deemed as the “most live-streamed social unrest in history”, as China’s national security law is being enforced in Hong Kong, protesters and activists, journalists and photographers have been either arrested or have fled in exile or are seeking asylum in other countries. There are no more visual account of the remaining pro-democracy activities in Hong Kong, even the mere mention of Tiananmen was erased from school text books, where are the Hong Kong Capas of yesterday? Where are the Burmese Capas of tomorrow?

Mikko Takkunen sounded more optimistic, as he wrote to me: “It’s difficult to say how long the situation will remain so, but I am certain that should major protests and clashes return, photojournalists will be out there documenting it. It’s just this quieter time that is currently so challenging.”