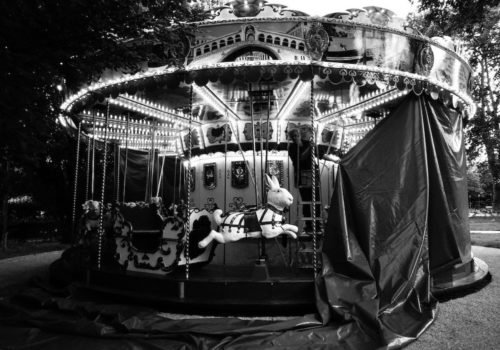 Australian photographer Tony Maniaty’s series, ‘Amour Toujours’, is showing at the gallery of the Alliance Francaise in Sydney. The Paris images, taken at the height of the Covid pandemic, are included in the photobook ‘Our Hearts Are Still Open / Nos Cœurs Sont Toujours Ouverts’, available from Editions StudioTettix.

Maniaty’s writes about his work:

Amid the detritus left by Covid, life goes on – in Paris as elsewhere. What the pandemic takes away in convenience, mobility and a sense of continuity, we soon replace with another manner of life, a return to shared experience, and even love.

I arrived in Paris from Sydney in the midst of winter, aiming to roam around Europe freely with my cameras. The Coronavirus – like me, moving halfway around the world – had other ideas.

Daily life was marred by bans, limitations, altered plans and disappointments, until the term ‘2020’ became a Titanic going down as the months clocked over and collided with the ocean floor, a shipwreck of a year from which nothing could be saved. An emptiness filled our psyches, we accumulated time in our bodies until we began losing our sense of time.

We were told many things, and had trouble believing.

Paris, a city that knows great hardship as well as sublime beauty, had suffered profound crises in the opening decades of the century, not least a wave of terrorism that left hundreds dead, many young and healthy, at the start of life’s journey. This time it was mostly the elderly and infirm, targeted by an unseen force that crossed the planet with devastating speed and impact that changed life irrevocably.

But love appeared, as it does. Love, shared humanity and gentler rhythms, albeit tinged with uncertainty. The vigorous pursuit of happiness gave way to simple thanks for being alive. Behind each mask were the dreams and visions, the wishes and doubts of an entire city. We were together, and alone. Walking, we lowered our eyes. When we passed strangers, we smiled and whispered ‘Bonjour’, but who knew?

As a journalist I had covered terrible disasters and war, but none of that prepared me for Covid’s tumult. My cameras became weapons, not against the virus but against loneliness, isolation and fear. By documenting Paris life, I was connecting not only with those around me but also with the world beyond, because the pandemic itself, like photography, was without borders.

I wanted the images, captured always in monochrome, to emerge from the darkness around us, to allow each to speak strongly of hope. These fragments, both gentle and brittle, are less about loss than discovery, less about gloom than optimism. Between each photograph runs an invisible thread, of life and human dignity.

One morning, as I was leaving the boulangerie, I commented to the owner that Paris had become a ghost town.

‘Oui’, she called out, cheerily. ‘The bars and cafés are closed, monsieur, but our hearts are still open!’

Tony Maniaty is an award-winning author and photojournalist based in Sydney and Paris. He has been the European Correspondent for Australia’s SBS TV, Executive Producer of the Australian Broadcasting Corporation’s ‘7.30’ current affairs program, and Associate Professor of Creative Practice at the University of Technology, Sydney.