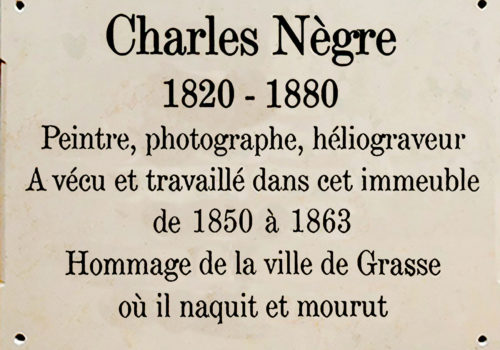 Charles Nègre, one of the most important photographers of the 19th century, was born in Grasse in 1820 and died there in 1880. Encouraged by his father, a famous confectioner, the young Charles quickly showed a disposition for art. and left for Paris in 1839 where he learned painting in the studio of Paul Delaroche. On August 19 of that same year, Louis Daguerre’s photographic process was presented to the whole world by François Arago. Charles Nègre quickly took an interest in it. He took his first photographs in 1844, first to make studies for his paintings, then as a unique means of expression. A student at the Ecole des Beaux-Arts, he frequented Ingres.

In 1849, Charles Nègre moved to 21 Quai Bourbon on the Île Saint-Louis. His studio was in the courtyard and he lived on the third floor. He made his best photographs there and became one of the masters. He sought the poetry of the world in simple things, ordinary situations around him, common people, chimney sweeps, stonemasons, ragpickers, musicians or street vendors, which was innovative. We cannot yet speak of reportage because the technical conditions of the time required posed situations, but it prefigured the humanist photography of the Atgets, and later Doisneau, Lartigue or Cartier-Bresson.

For the bicentenary of his birth in 2020, the city of Grasse wanted to pay tribute to the child of the country, but Covid obliges, it was last  October 21st that a commemorative plaque was placed on the facade of the apartment building.

In the presence of Dominique Nègre, little nephew, many friends and supporters, André Jammes, the “discoverer” of Charles Nègre, Alain and Françoise Paviot, gallery owners, the mayor of Grasse uncovered the plaque.

It was with great emotion that the guests were able to discover in the interior courtyard that the places were practically identical to those of the time and, by comparing with the photographs of the 1850s, we each location could be found.

Wits a fragile health, Charles Nègre left the Quai Bourbon where he lived for 12 years to return in 1863 to the south of France.

Charles Nègre’s career was exceptional: he began to practice drawing at 17, painting at 19, photography at 24 and photogravure at 35; he thus anticipated contemporary media. Both an artist and excellent technician, creative but driven by great rigor, it is this spirit which, beyond his work, must be perpetuated. The installation of this plaque in Paris is an enthusiastic contribution from the city of Grasse.

A graduate of the School of Vevey, Michel Cresp was a photography teacher at the Famous Photographers School in Monaco and above all a photographer and graphic designer for perfumers from Grasse for many years. Friend of Lartigue, he participated with Joseph Nègre and Alain Sabatier in the preservation and distribution of the works of Charles Nègre, a pioneer of photography in France.