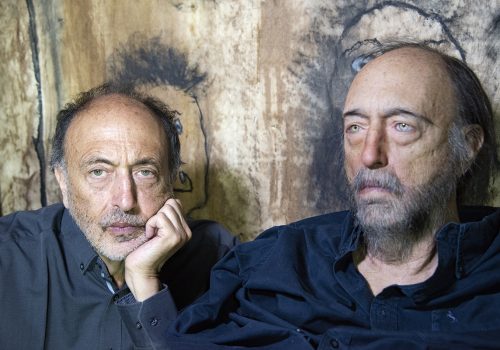 Roger Ballen’s work is unusual, freaky, nightmarish – and known all over the world. For more than five decades, the American-born, Johannesburg-based multidisciplinary artist has been sharing his depictions of run-down buildings, uncomfortable companions and a view of the world that is far beyond the ordinary. If you think of Diane Arbus’s characters, multiply this by the death-wish of Joel-Peter Witkin, and add the colorful fantasy and psychology of Alice in Wonderland, you might end up getting a little closer to Ballen’s dark and ambiguous world of mysterious rooms inhabited by equally eerie objects, animals, people, and their shadows. And at the end, if you feel you have seen it all, the artist is ready for more. So let’s hear from him and find out what’s new.

Nadine Dinter: For more than 50 years, you have been known for your work in black & white photography. Since 2018, you have been working in color; what led you to this change?

Roger Ballen:In 2016, Leica provided me with their SL camera to film the Ballenesque video on the occasion of the publication of this Thames & Hudson book. As I was filming, I occasionally shot some color images with this camera. To my great surprise, some of these photographs were aesthetically superior to the black and white ones. Over the next year, I gradually made the transition between shooting all my images in black and white film with a 6cm x 6cm Rolleiflex Camera to color with the Leica SL.

Do you see yourself ever switching back to black & white photography, or do you relish the fresh feel of incorporating color into your work?

RB: It is always difficult to predict the future, but at this moment in my career it is doubtful that I will exclusively shoot black and white film, nevertheless it is very unlikely that I will give up black and white. In fact, I am finishing a black and white series taken with a Leica Monochrome on an animated Rat character.

Your upcoming book The World According to Roger Ballen will contain mostly color images. Please tell us a bit more about what to expect in it…

RB: The upcoming Thames & Hudson book The World According to Roger Ballen will be released this September documents for the first time the places, people, objects, and me at work within the environments that I have photographed in for the past decades. Most of these color photographs were shot by Marguerite Rossouw, my artistic director, who has created with me over many years. Furthermore, the book contains many of my recent color photographs that have never been published before. For those interested in my black and white imagery, The World According to Roger Ballen will contain nearly one hundred black and white images of mine some of which are previously unpublished, and others which might be considered iconic and will all be shown during the exhibition at Halle Saint Pierre.

Aside from your new book, your latest solo exhibition will be opening at La Halle de Saint Pierre in Paris on September 7, 2019 and closing in August 2020. What kinds of images can visitors expect to see; will you be showing new works or a mix of old and latest works?

RB: The show at Halle Saint Pierre will not only show my color and black and white imagery, but a great deal of the Museum space will be dedicated to Installations that will dominate the first floor of the Museum. Many of the items in these installations will come directly from Johannesburg, South Africa and have been integrated into my photographs. In addition, the exhibition will showcase my collection of objects and drawings and one will be able to view several videos that I have created over the years. In summary, this show will be the most all-encompassing exhibition of my career.

What is your experience with French viewers? We still think back to the abandoned house that you transformed in Arles, The House of the Ballenesque,in 2017. Will there also be walk-in scenarios in this upcoming show?

RB: Over the years, the French audience has been incredibly enthusiastic about my work and therefore it is a great pleasure to have such a show in Paris. In the first floor of Halle Saint Pierre the audience will be able to experience through a walk-in-scenario the 8 installations which will dominate this space. One might classify these Installations as Theatre of the Absurd or Theatre of the Ballenesque, but I am quite certain, like the Arles Installation, these artworks will create a lasting and memorable impact on the viewer.

Throughout the years, you have added more and more layers to your works, without losing sight of your core themes. Can this process, in your opinion, be compared to unfolding the different layers of a personality? After all, you have compared your House in Arles to the inner self and have mentioned C.G. Jung as an inspiration…

RB: The photography I have produced over the last few decades seems to have increased in its complexity as time goes by. Although the medium is static, I am often struck by the fact that my images contain opposing meanings. They may have an aspect of darkness to them, but they may also be funny. What does it mean, then if something is humorous but also disturbing? There’s not even a word in the dictionary for that quality or relationship, what one can say is that archetypal symbols from the deeper levels of the human subconscious pervade my photographs.

You started out your artistic career as a painter. What made you turn to photography? To what extent does your painting live on in your current work?

RB: I bought my first camera, a Mamiya, when I was thirteen. By that stage, in the early 1960’s, my mother had been working for Magnum for some years. Through her conversation, and particularly her collecting, I was exposed to the work of many photographers-some of them now considered historically important. For a period of five months, from February to June 1973, I painted day and night, trying to come to terms with my inner identity. Thirty years later, my desire to express myself through the line would erupt, this short period in New York having created the foundation for my later work. I had not finished what I had started.

Who are some of the people that inspired you at the start of your career, and what people continue to inspire you?

RB: In the early years of my career (1960’s and 1970’s) the Magnum photographers were my idols, my heroes. I ended up assimilating their images and by the time I went out to photograph seriously, which was around the age of eighteen, I had a clear idea of the level I was aiming at. Among those photographers who influenced me are Henri Cartier-Bresson (the decisive moment), Elliot Erwitt (the humorous and the absurd), Paul Strand for his formal approach, and lastly Andre Kertész who taught me that photography could be an art form. At this point in my career, I am not inspired by one artist or one art form over another. It is crucial that I am inspired by my own work; and I spend a great deal of time contemplating the questions that my imagery that evokes. Many of the elements in my photographs are beyond my conscious mind; it might be years before I come to conclusions about them. These are the images I am most inspired by, the ones I do not understand.

Parallel to your own photography, you are currently building a Centre for Photographic Arts in Johannesburg. What is its purpose, and what can we expect to see there upon its completion?

RB: At this time, I am currently in the process of building The Roger Ballen Centre for Photographic Arts in Johannesburg. The construction on the building will be completed by the Spring of 2020 and I am hoping that the first exhibition takes place by the fall of 2020.

The Roger Ballen Centre for Photographic Arts will create and support photographic programs of the highest quality to further the understanding and appreciation of the medium. Working with artists from around the world, the program will enable students and general audiences to engage with notable historical and contemporary photography art that would otherwise not be seen in South Africa.

What is your advice for aspiring artists who seek to follow your path by devoting their work to the darker sides of society and life?

RB: It is important that aspiring artist to understand that this profession, as like in most others requires hard work, discipline, passion, and talent. One should ultimately understand that the art market is extremely fickle and not always rational in its judgements and the chances in ser of financial success in more complex photographic art are very minute. As a result, and that it may take decades of commitment before one is recognized, I commonly suggest that one has an alternative profession to live on while pursuing an artistic career.

Thanks so much, Roger, for taking the time to share your latest thoughts and news with our readers!