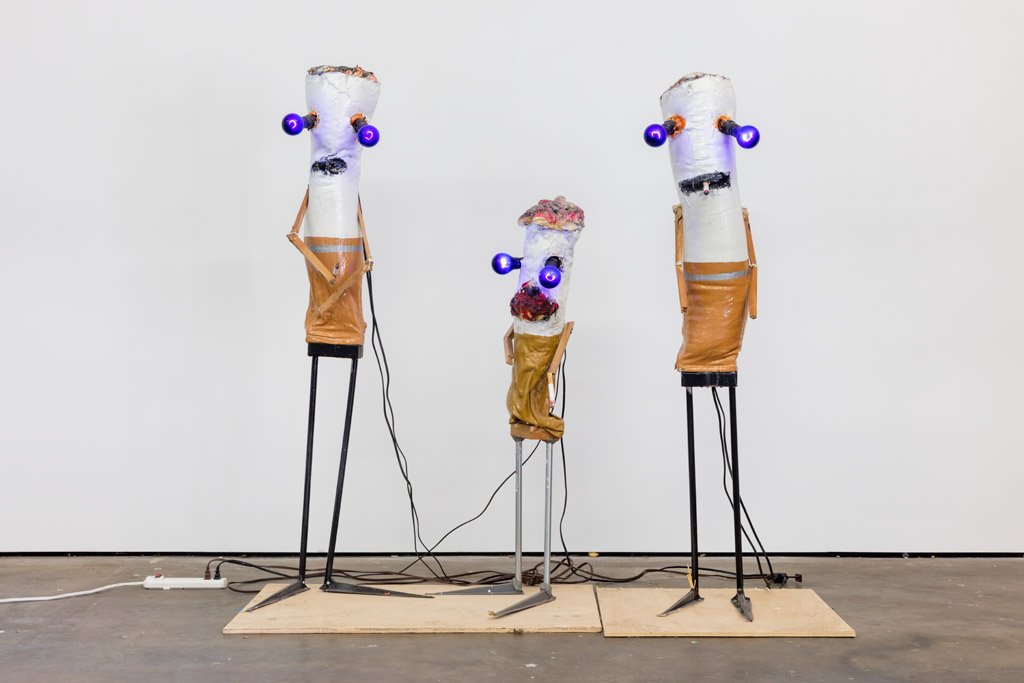 Why did you decide to create LAND, connected to the specific climate of Los Angeles experimental art scene ?

The core of our mission at LAND came in part from my experience working on the 2008 Whitney Biennial (with Henriette Huldisch, who is now the Senior Curator at the List Visual Arts Center at M.I.T.). Many of the artists we wanted to include worked in what we were then calling “expanded practice,” where all different types of artwork were equally important to them within the scope of their work. It just needed something other than a white cube, which didn’t function as well in the museum, so we took over the Park Avenue Armory. It was a dramatic part of that Biennial, and it led in large part to thinking about the LAND model for me.
Another important aspect of LAND’s conceptualization was my increasing interest in Los Angeles as an art center– I realized that there wasn’t a single organization in the city that was dedicated to public art. The artists were really doing these things on their own. You can just randomly occupy the empty corner store and no one is going to care too much; it’s still possible to do that in Los Angeles. It’s not like New York, which is entrenched in all the rules of what you can and can’t do. In Los Angeles, you don’t wait for a curator to come around and put you in a show—you just have the show yourself. This idea of just doing things ad-hoc and having shows in unusual places was already very pervasive, and it struck me as interesting that LAND could provide support and amplification for artists already working in this way.
The three main types, or scales, of our commissioned programming include large-scale, multi-site, multi-artist exhibitions (group thematic shows that exist over time and space); monographic exhibitions or discrete group exhibitions; and one-night ephemeral performances and durational events. These varying scales each hold the same level of import curatorially, and each hold equal weight to my mind. As part of LAND’s mission, we feel it is critical to engage the public in the various facets of artists’ endeavors and practices, not just a final product that is hung on a wall. We believe that the public deserves the right to experience innovative and thoughtful contemporary art in their day-to-day existence, something beyond the museum or gallery context. We also believe that artists deserve the opportunity to realize projects and ideas that might not make sense in a museum or gallery, which lends itself to our structure.

Wasteland presents a watershed moment for LAND (Los Angeles Nomadic Division), marking its first international endeavor. Since LAND’s founding in 2009, our projects have spanned the United States, from Florida to Louisiana to Texas, and most fundamentally, in our hub city of Los Angeles, California. As it is LAND’s mission to curate site-specific public art exhibitions in unique spaces and locales, each project presents a new and exciting opportunity for collaborations with distinct venues, cities, and artists.

Can you explain us the choice of the tittle, the Waste Land ?
The title of the exhibition refers to the show’s thematic and conceptual foundation: the seminal modernist poem, The Waste Land (1922), by T.S. Eliot.  As one of the 20th century’s most epic confrontations with modern humanity, the original text was published during a moment of great disillusionment with politics (the devastation of war), socioeconomics (the modern urban landscape) and individuality (increasing alienation, loss of interpersonal connection). Politics, community, urban dislocation, sexuality, and diminishing faith in the future: these weighty matters of modern life occupied post-WWI society, and are disturbingly parallel to the most pressing concerns of our contemporary moment.

Eliot’s poem within its artistic genre was considered canonical through its use of multiple, unannounced voices, locations, and times; its then-shocking combination of cross-cultural, cross-historical referents and its structural mash-ups across formats and types—and as such provided an overall shaping to the curatorial thinking and selection of the fourteen participating artists, each of whose work– diverse modes of practice, media, and conceptual approach– resonates with the thematic threads, richly interwoven, of the poem’s fabric. Lastly, beyond the direct literary referent, the title also evokes other definitions and connotations— whether the old chestnut (long disproven but still present) of Los Angeles as a “cultural wasteland,” or a more literal reading of the word applied to the physical geography of both the city and the natural landscape of Southern California. It additionally calls to mind resonant images of the post-apocalyptic, the post-human, the potential future, largely created through the image magic of Los Angeles’ greatest export, Hollywood.

How do these 14 artists reflect a kind of muti-dimensional conversation and “expanded practice”from the city of Paris (classical hotel particulier of Mona Bismarck foundation) to the suburban modernity (industrial warehouse of galerie Thaddaeus Ropac) ? Both distinctive site and venue.

The artists and the artworks included here present a reflexive, complex, multi-dimensional conversation about the poetics of despair, the search for true connection, the tenuous state of morality, and the uncertainty, yet necessity, of the future. One cannot remain trapped in the wasteland, but must be restlessly pushing forward to create new signification from Eliots “heap of broken images,” and make way for the future.

This kind of complex thematic lent itself to a non-traditional exhibition structure, spanning across two venues and creating a dialogue between them and the works in each site. All of the artists (save one) are represented in both venues, so to experience the exhibition completely, one must traverse the modern city (Eliot’s true wasteland) and visit these also quite disparate type of site and neighborhood– the 19th century french hôtel particulier of Mona Bismarck, centrally located on the Seine, then moving to the converted industrial warehouse space on the city’s outskirts in Pantin. Each artist considered the intricacies of the two venues to create either newly commissioned or recombined works, thereby vitalizing conversation with and between the two settings and cities.

Why is it a great opportunity for the Mona Bismarck American Center to host this double-faceted event in conjunction with Galerie Thaddaeus Ropac and for the French public?

The title Wasteland comes from and is inspired by T.S. Eliot’s modernist poem The Waste Land, but resonates well beyond this literary reference. It serves as the common thread tying the fourteen artists together, who interpret this thematic in diverse, and often unanticipated, ways. They consider the Center as an accomplice, an inspiration, a mirror, a collaborator. This exhibition will enable our Parisian audience to have a glimpse into the dynamic cultural production that exists today in Los Angeles.

This year marks the celebration of MBAC’s 30th anniversary; how will it be the challenge of a ‘rebirth of the Center’ as stated upon your arrival?

Our goal is to revitalize the artistic conversation between France and America and redefine Mona Bismarck’s original vision– to highlight and celebrate the arts and artists of the United States. The idea is to exhibit the enormous diversity of American cultural production and expand the traditional canon by showing artists rarely exhibited and less known in France alongside those who are already known here, and to have exhibitions and programming that animates the venue – both intellectually and physically – in an unexpected way.

To that end, the Center has defined 3 spheres of activity: Exhibitions, Interventions – our dynamic programming for the public such as our artist and critic talks, concerts, performance series, round tables – and Opportunities, intellectual residencies where we support projects by artists, curators, and critics.

To celebrate the relaunch of our exhibitions, it was important to me – for the first exhibition of the renaissance of the Mona Bismarck American Center – to expose new American artistic voices as well as the voices of American curators who contribute to the national conversation on modern and contemporary art today.

Shamim Momin, Wasteland’s guest curator, is one of those unique American curatorial voices. When she proposed a project of artists from Los Angeles creating site-specific works exhibited in two different locations – ours and the Ropac space in Pantin – her proposal was of obvious interest to us!

Concerning the scenography, for this exhibition, I wanted to dismantle the boundaries of the gallery space by showing works that were not necessarily linked to the walls. So, the main idea was that the interior decoration would remain unchanged – neither covered, nor hidden. The Mona Bismarck American Center is an incredible building in the heart of Paris and I want our Parisian public to discover – or to rediscover – the beauty of this building.
At the same time, this juxtaposition of contemporary art in a historic place, stimulates a more profound conversation between the venue and the work, where one can look at the environment and the art in a new way.

As we know, America is difficult to define. We often raise more questions than provide easy answers. This cultural specificity raises a unique challenge: how do we tell that sprawling narrative, that is America, through the arts? America is, above all, an idea. One that is changeable, multicultural, multifaceted and, at times, contradictory. We have many different stories to tell and varied points of view.

My principal role, as artistic director, is to take that vast landscape of American art and frame it into clear stories with which the audience can identify, react, and respond.
I want the Center to be surprising and captivating for our audiences. The ambition of the MBAC is simple – to celebrate American artistic talent – be it traditional or conceptual – with a new momentum.