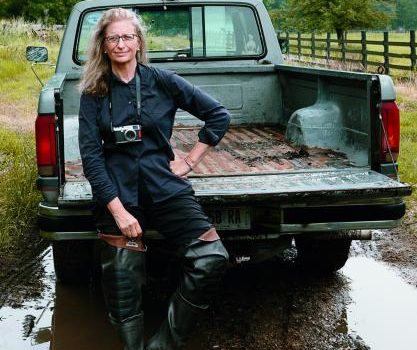 To prepare her new project, the photographer Annie Leibovitz had to give up assignments from the magazines that first brought her fame. Produced over a two years period, Pilgrimage seems like a renaissance for the artist.

For a long time, it wasn’t clear how Annie Leibovitz would make it. The last time we saw her, Leibovitz’s own image had overtaken the gossip pages of Vanity Fair and Vogue, pages that were normally filled with her peerless pop sensibility. Two years ago, it came to light that Leibovitz, faced with millions of dollars debt, was in danger of losing the rights to her archives. It was a provocation that she, for once, hadn’t provoked.

The storm passed, and today we can see her talent on display in a solo exhibition at the Smithsonian American Art Museum in Washington. She began the series at Niagara Falls during the worst of her financial troubles (the hotel refused her credit card). The setback didn’t prevent her from showing her children the wonders of the Falls, nor from immortalizing their cascading turquoise waters in a photograph on display in Pilgrimage. It was the latest in a series of audacious acts that have marked Leibovitz’s career.

Annie Leibovitz is back with a series of 64 photographs taken between April 2009 and May 2011. They evoke Abraham Lincoln and Georgia O’Keefe, the pioneering English photographer Julia Margaret Cameron and Yellowstone National Park. She embarked on a pilgrimage retracing her cultural heritage across the United States (and briefly in England). Given her other work, it’s surprising that no faces appear among the photographs. Leibovitz employs diverse means to evoke these historical figures: still lifes, landscapes, rooms and objects.

Taking history and its symbols as inspiration, the path she followed led her from Emily Dickinson’s house, to New Mexico, to a Civil War battlefield in Gettysburg, and to Sigmund Freud’s office in London. By following the trace of Daniel Chester French, who sculpted Lincoln’s statue at the president’s memorial in Washington, she found herself in Illinois, home of Abraham Lincoln Presidential Library and Museum.

One thing led to another, and one person to another. The currents of the River Ouse remind one of Virginia Woolf’s suicide, and a Harley Davidson conjures Elvis Presley at home in Graceland. “These pictures may surprise even those who know Leibovitz’s photography well,” says the curator Andy Grundberg. “They are more intimate, personal and self-reflective than her widely published work, combining the emotional power of the recent black-and-white portraits of her family with an awareness of her own cultural legacy. All photographs are in a sense intimations of mortality, but the pictures of Pilgrimage make this connection explicit.”

Like many commercial artists, while not on assignment, Leibovitz finds an escape in her personal work. Pilgrimage, with its intimate nature and tightly framed images, departs from her usual style. “It’s not me,” she told the press. These are words that seem to betray a desire for protection, for herself and for her work, which she plans to return to, revitalized. For once in her career, Annie Leibovitz took her time. If anything, she has won back her right to privacy.