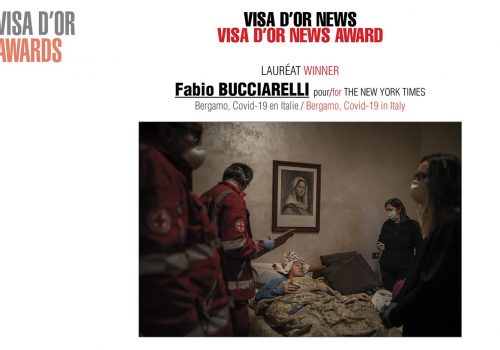 For the thirteenth time, the Region of Occitanie / Pyrénées-Méditerranée will fund the prize of €8,000 for the Visa d’or Feature award winner.

Claudio Travelli (60) was examined by Red Cross volunteers. He chose to remain at home, but the next day his condition worsened and the Red Cross team returned to take him to hospital. Cenate Sotto, Italy, March 15, 2020.

For the thirteenth time, the Region of Occitanie / Pyrénées- Méditerranée will fund the prize of €8,000 for the Visa d’or Feature award winner.

Drought and Deluge in India

Children playing in water pumped through a privately owned bore well. The use of bore wells increased 10 to 15 years ago when monsoonal rains became less consistent, causing a substantial decline in groundwater levels in the region. Lamheta, Uttar Pradesh, June 2019.

Entries were received from 23 newspapers. The Visa d’or has been awarded to the American digital news media CNN.com for the report by Rosem Morton “I was raped and broken. So I picked up my camera.”

“When I told my husband I was assaulted, I said, ‘I will go to therapy for a couple of months and put all of this behind me.’ By November, I had been seeing my therapist every week for four months. At the end of this session, sitting in my car, I broke down and realized that the work had only just begun.”

The scope of the award covers virtual reality, interactivity and editorial video work released on social media. In the context of non-stop news around the world, the Visa d’or franceinfo Award for the Best Digital News Story recognizes an idea, content and original work offering an interesting angle and perspective on the news.

The winning digital news story for 2020 is on the subject of victims of domestic violence, women who are murdered by their partners. The project was produced by Le Monde newspaper under the title “Féminicides – Mécanique d’un crime annoncé” and features photography by Camille Gharbi.

The prize money of €8,000 will be donated to the women’s shelter “Maison des Femmes” in Saint-Denis (Greater Paris) which is managed by Ghada Hatem.

The ICRC Humanitarian Visa d’or Award, founded in 2011, is an annual award, for a professional photojournalist who has covered a humanitarian issue related to a situation of armed conflict. The subject chosen this year is urban warfare and the impact on civilians, either trapped and hiding or forced to flee.

The winner of this year’s award, with prize money of €8000 funded by the ICRC, is Alfredo Bosco / Luz for his report “Forgotten Guerrero” on the consequences of the war between the drug cartels in the state of Guerrero, Mexico.

The Lifetime Achievement Visa d’or award was created by Visa pour l’Image and Le Figaro Magazine in recognition of the lifetime achievement of an established photographer who is still working.

The winner of the 2020 edition is Jean-Pierre Laffont.

For the twentieth year in a row, Canon and Visa pour l’Image will be presenting the prestigious Canon Female Photojournalist Grant to an outstanding photographer in recognition of her contribution to photojournalism.

The 2020 winner, Sabiha Çimen / Magnum Photos, will receive prize money of €8000 to help carry out her work in progress, “Hafiz, the Guardians of the Quran,” which will be featured as an exhibition at the 2021 festival.

This year’s Visa pour l’Image festival will exhibit the work of the 2019 grantee, Anush Babajanyan / VII, “A Troubled Home.”

Visa pour l’Image, Google and Dysturb are proud to announce the winner of the Urban Newcomer Photographer’s Grant.

The five finalists on the shortlist are Marvin Bonheur, Aïda Dahmani, Emilie Désir, Ilyes Griyeb, and Cebos Nalcakan. And the winner is Aïda Dahmani.

The choice made by the jury stands as recognition of an up-and-coming figure in French photography with an innovative approach to work on urban stories.

The winner will receive the grant to carry out one or more projects. The grant provides funding of €8,000 plus monitoring and assistance from Google, Visa pour l’Image and Dysturb, as well as the possibility of featuring the winner’s work on the Google Arts & Culture website.

Picture editors of international magazines have chosen the best young reporter for the Ville de Perpignan Rémi Ochlik award which is being presented for the fifteenth time.

The jury selected the young photographer who, in their opinion, produced the best report, either published or unpublished, in 2019/2020.

The Ville de Perpignan sponsors the prize of €8,000.

In the arrivals hall at Hong Kong international airport, a human wall formed in protest against the draft extradition bill. July 26, 2019.

The award, which is being sponsored for the sixth time by LaScam (the collecting society for multimedia authors), is designed to help a photographer carry out an original reporting project.

The winner of the 2020 award, with prize money of €8000, is Jérôme Gence who was selected by the jury on the basis of his plan to report on telecommuting in France.

Jeje, a digital nomad, working alone in Dojo Bali, a coworking space in Canggu (Bali, Indonesia). She used to be a flight attendant, but the pressure of the uniform was too much, so she decided to try a career as a digital nomad. “At first, coworking spaces are great, but as you start to belong to a community and make friends, you are distracted and less productive. Now, I prefer to work in a café, alone.”

For the fourth time, the collecting society la Saif* is supporting the award which provides backing and encouragement for a photojournalist committed to a longterm project. The award presented to this year’s winner, Olivier Jobard / Myop, will help him carry out his report on a little known path taken by migrants, crossing from Ethiopia to Saudi Arabia, depicting the experience of the family of Mustafa, a man he met in Aden.

Near Galafi on the border between Ethiopia and Djibouti, one of the hottest regions in the world. Hundreds of Oromo refugees fleeing Ethiopia cross the mountains to reach Djibouti.

Winner of the 2020 Camille Lepage award supported by la SAIF

For more than twenty years, the ANI (Association Nationale des Iconographes) has been organizing presentations of portfolios during the professional week at the festival Visa pour l’Image – Perpignan, seeing over 350 photographers from a wide range of backgrounds, providing guidance and advice. This year, while it is impossible to hold this key activity of the festival at the Palais des Congrès in Perpignan, ANI members are pleased to be conducting portfolio reviews on line. The three award winners for 2020 are Odhràn Dunne, Jeoffrey Guillemard and Kamil Zihnioglu.

The 2020 winner, Odhràn Dunne, received the main award, which is being presented for the eleventh time, with prize money of €5,000 sponsored by PixTrakk, the solution for monitoring and tracking pictures published in the printed press and on the Web.

In 2020, the winner of the sixth award, with prize money of €8,000 funded by the Yves Rocher Foundation, is Mathias Depardon.

The award will help the photographer carry out his report on changes in the historic region of Mesopotamia with the Tigris-Euphrates river system running dry, looking at the impact on both the ecosystem and society, as soil salination and the prevailing drought in Iraq see more and more communities displaced.

For the three million people who live in Basra, the second largest city in Iraq, water is a major challenge. “We have no water for livestock, and if we wash in it, we fall ill. More than 100,000 people had to go to hospital for treatment for the effects of poisoning,” explained Hashim who lives in the working class district of Al-Tannuma on the east bank of the Shatt al-Arab River.

The Carmignac Foundation is pleased to be associated with the festival  Visa pour l’Image for the sixth time. The 11th Carmignac Photojournalism Award, on the Democratic Republic of the Congo (DRC), has gone to the British/Canadian photographer Finbarr O’Reilly. Finbarr O’Reilly started working on the project in January this year, before the Covid 19 pandemic turned our lives upside down. With borders closed, he could not travel to the DRC, so devised a new approach, working with the award team and adapting the report to cover the current crisis. This has produced the “Congo in Conversation” project as a joint online report done in close collaboration with Congolese journalists and photographers. The Congo in Conversation website presents original content with regular additions, featuring photographic and video reports documenting the many human, social and ecological challenges in the DRC today, as seen in the context of the unprecedented health crisis.

A Red Cross burial worker shows a man how to put on protective gloves before the inspection of the body of an 11-month old girl who died during the Ebola outbreak in the town of Rutshuru in North Kivu province, February 2020.