Val Fleury : Marie Dorigny & Claudine Doury : Women from one World to Another 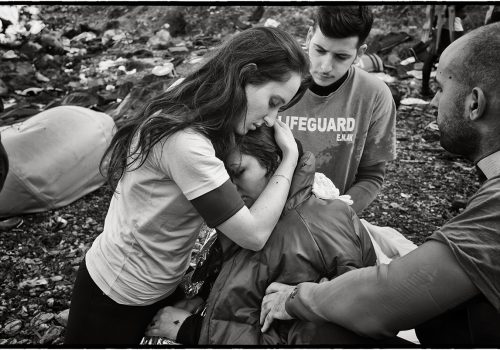 The current difficulties encountered by photographers are even bigger for women. Paradox of a profession which is more and more feminized, but remains under male domination. Yet we would not risk looking in a photo for a way of looking due to gender. First of all, there are looks that touch, upset and patiently build a photographic whole that imposes itself, as those of Marie Dorigny and Claudine Doury have imposed themselves on us, of which we invite you to discover the exhibition: Femmes d’un monde à l’autre.

Marie Dorigny goes to meet threatened women , forced into flight and exile. The photographs plunge us into this world of distress of women she met in the turmoil, while stranded on the borders of Europe, which is to say the least, hesitant to welcome them. Yet it is first of all the dignity and deep humanity that permeates her photos that touch us and bring them so close to us. With the time given to time, allowing this proximity and this availability, we measure the constants of her photographic work: a woman who listens to women.

In small touches, tinged with poetry and a recurring sweetness in her work, Claudine Doury takes us on her journey to Central Asia.

A journey where time can stretch out, become the photographer’s ally. She approaches these young women in endless, seemingly immutable expanses. As an accomplice, she receives their photographs more than she takes them, leading us far beyond the everyday and the present that the images document, bearers of an enriching universality.

“Displaced, Femmes en exil” and “Loulan Beauty” two series that come together, here to give hope, to try to push away barbarism.

In December 2015, when Marie Dorigny flew to Lesbos, something had just changed for the refugees who had arrived by the thousands on the rocky coasts of the Greek islands since the summer: Europe made a gesture. and opened her door sligthly. The corpse of a little boy asleep forever on the sand,  seemed to cloud her good conscience.

In the European Parliament, came an alarming report on the situation of women asylum seekers and the specific difficulties they encounter on the road to exile. Together with children, they form half of the population on the move. A photo report was then commissioned by the Parliament to Marie Dorigny. She would follow them from the beaches of Lesvos to homes in Germany. Throughout her travels, Marie Dorigny has long watched and photographed women, the silent half who weave a safety net around the world. They are always in charge of other lives than theirs.

Look at them who have never seen the sea and tremble in the canoes, who add on their scarves the shine of a survival blanket, who beg a pass from the authorities, who walk at night along a fence between two crossing points… .. They never go alone. There are children in the hollow of their stomachs, in the hollow of their arms, at the end of their hands. And soon, in slowness or speed, we no longer really distinguish the peasant woman from the mountains from the city women from beautiful neighborhoods, the Syrian, the Iraqi, the Afghani. Nothing is more like the one who flees than the one who flees. The mother and child is a timeless image.

Yet it was at the turn of 2016 that these photos were taken. The date is important. Because the gesture of Europe was only short-lived. A few months later, in March, the European Union and Turkey signed an agreement to reduce migration to Europe. There are therefore no longer as many volunteer arms offering help and hugs on the beaches of Lesbos, a police cordon prevents them from approaching. No more transit camp, we call it a detention center. No more passage open between Greece and Macedonia. No more buses, no trains, no more official escorts. The smugglers have resumed their criminal bargaining.

These dark photos therefore tell of a breakthrough. These dazed, worried, exhausted faces, had vague sense of security. These crowded trains, double-locked, slipping through the night out of sight and opinion, a moment of openness. These cold social care instution of Germany are the promised land.

These photos show the maximum that Humanity could offer. They could not be taken today.

The history of Central Asia since the end of the 20th century is necessarily associated with the fall of the Soviet Empire, when its eastern states (Kazakhstan, Kyrgyzstan, Uzbekistan, etc.) gave up their look of Soviet republics (new cities, collective farms and socialist realism) to reconnect with older images of the Silk Road countries: desert cities and bazaar colors, lasting support for the Western reverie of a nomadic, mysterious and inaccessible Asia, mirage born of dust steppes.

Claudine Doury’s Loulan Beauty series superimposes these two visions by choosing a common motif: the portrait of youth, and in particular young women. If the title itself evokes a very old woman (a 4000-year-old mummy unearthed with her steppe girl’s braids, an archetypal image of Central Asian femininity), it is young people alive and well who populate these photographs wih their dreams, their aspirations, their eyes on a horizon still undecided. A wedding scene in Khiva (Uzbekistan) symbolizes the relationship to time that runs through the entire series: at the foot of the earthen walls of the ancestral city, seeming to have emerged from an oriental tale, the young couple surrounded by their family advances bravely towards the invisible architecture of a life to be built, towards the world of tomorrow that is still out of the picture.

What is the future in a world where neither time nor space is limited? Time-honored scenes, costumes inherited from tradition, endless plains, endless journeys by bus or train are the vocabulary of this questioning, which places young people in a paradoxical landscape where the disasters of recent history (such as the the drying up of the Aral Sea) obliterated the lost ground of a beige expanse, vast as a sky, where the gaze searches in vain for a limit.

On this screen are deposited the colors delicately taken by Claudine Doury: an ikat dress, seaweed green bricks, an incredible hat with a pink plume, the blue curtain of a train which carries a child towards another. life maybe. And Malika’s clear gaze, magnetic, restless and melancholy, overwhelming like an unanswered question thrown into the wind of the steppe.