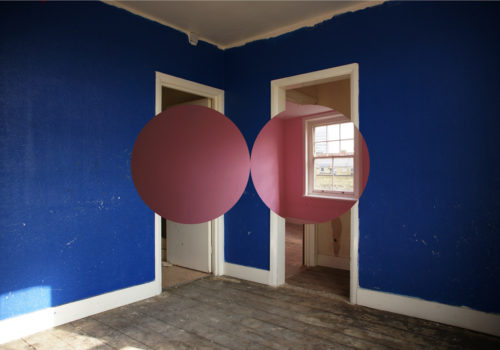 CT (Computed Tomography) is a series where the artist describes a scene as though the architecture is scanned, like a human body. Although we first accept the scene as an ordinary landscape, if you’d look again, you’d notice the scene is actually “impossible” to see.

Toshihiro Komatsu was born in Hamamatsu City, Shizuoka Prefecture, Japan, in 1966. After receiving his M.F.A. at Tokyo University of the Arts, Graduate School (1993), and his M.S. at Massachusetts Institute of Technology, Department of Architecture (1999), Komatsu has showcased in museums such as MoMA PS1 (1999, New York) and Queens Museum (2000-01, New York) after participating in residency programs in Amsterdam and New York. He has also actively participated in international art festivals, including the Echigo-Tsumari Art Triennale (2012/2015, Niigata, Japan) and Setouchi Triennale (2013, Kagawa, Japan), and more others.

DESSIN is a series photographed by one push of the shutter without any digital manipulation. The artist aimed to capture his instinctive impression of seeing the natural landscape—including the wind and the atmosphere—with his camera, like when a painter draws a dessin. The artist explains the abstract structures in the photographs are “a collection of lines.”

The motifs in Finger Play are female hands that appear on printed matters in Korea, which in other words, are descriptions of how the Korean society sees “female’s hands.” We often think of facial and verbal expressions when speaking about communication, but hands are also intuitive and unconscious expressions. Kim instinctively plays with the images by either inserting her hand or physically applying embroidery on the prints.

Jinhee Kim was born in 1985 in Busan, South Korea. She completed her B.A. at Chung-Ang University (Seoul), Department of Photography, in 2008. In 2010, she released her first monograph Whisper(ing) (Iannbooks, South Korea). The series reflected her sympathy for the mild pain and anxieties that her generation has been struggling with. Since her later work, She (2014), Kim has consistently applied embroidery to her prints to express the female unconscious further. She was awarded the Excellence Prize at The Reference Asia: Photo Prize 2019 for Finger Play.

In this series, Mihotani uses snacks, food, and daily commodities he encounters in the supermarket. He purchases and enjoys the snacks, and after he washes the packages, he places them in the film holder and creates unique abstract expressions by taking advantage of the photogram technique. The packages, where “images for illustration purposes” are loudly printed to stimulate the appetites and desires of society, reappear in ways we had never expected.

The Ravestijn Gallery is proud to present Michael Bailey-Gates (b.1993, USA), Ferry Van der Nat (b.1965, the Netherlands) and K Young (UK) at UNSEEN 2021. Whilst each artist’s approach is markedly different, they share a common underpinning — gender, identity and sexuality. Although society has traditionally sought to define these ideas, today there is a growing awareness that it is those very definitions that are problematic; marginalizing, censoring and anchoring things that cannot be anchored.

Michael Bailey-Gates uses photography to gracefully dissolve binary perceptions of gender, identity and sexuality. In their intimate photographs of themselves and their friends, the definitions we’ve been conditioned to use become futile. Man and woman; masculine and feminine; straight and gay; all ebb into irrelevance. Even gender itself seems somehow immaterial. Objects, postures, relationships, clothes and actions too are here playfully reclaimed by anyone. But whilst Bailey-Gates confronts the conventions that continue to marginalise so many today, they do so without hostility. Instead, Bailey-Gates’ photographs are joyous, where those in front of the camera are free to imagine, perform and exist as they wish. At the heart of Bailey-Gates’ practice is a desire to reflect a world where gender, identity and sexuality are boundless conditions; always in motion and attune to each individual and each moment. Bailey-Gates knows such a world is real, and in looking at their photographs, we are able to catch a glimpse of it.

Ferry Van der Nat is less implicit. In fact, Van der Nat’s work is unflinchingly explicit. Working with the Polaroid Land Camera 103 and the Polaroid Big Shot — the same camera Andy Warhol used for many of his overtly sexual images — Van der Nat examines naked bodies with a candidly gay gaze. Nearly all of them are men: truncated torsos, faces, buttocks and private parts — sometimes erect. They are tightly framed images; skin, hair and limbs fill the space, illuminated under the bright flash of the polaroid. This combination of extreme proximity and the polaroid’s immediacy gives Van der Nat’s photographs their characteristic, erotic charge. As a viewer, such images push us to confront sexuality head-on — there is nowhere else to look. In a society that is still often uncomfortable with such openness, Van der Nat’s photographs are a frank reply.

K Young creates meticulous collages that deftly reveal the constructed nature of gender and identity. Their work starts with found photographs — mostly from second-hand books and magazines. These sources of material are telling enough; pages where identities are shaped, reinforced and shared. Pages where we are told what is right and wrong, acceptable and unacceptable. K Young then takes these images and cuts them up, rearranges them, splices them, layers them and re-photographs them. What once were whole photographs are now a liberated fusion of bodies, furniture, interiors and clothing. They are tender yet humourous, sexual yet reserved. Whilst K Young’s work literally deconstructs, and reconstructs, identities, it does so symbolically too. Through the act of freely mixing and matching identities, they suggest a different story than the one in magazines, tossing aside the belief that existence is fixed or singular. K Young brings this idea full circle by nevershowing an entire face. In doing so, they invite anyone to be whoever they want to be.

This new body of work that Marco Maria Zanin is presenting – in his double role of artist and anthropological researcher – aims to overcome the asymmetries inherited by euro-centric perspectives and yet present in the everyday speech, by building new relations among objects belonging to different cultures. Diverse artefacts, but united by a structural relationship with the cultivation of the soil and its logic, rhythm and rituals. For the artist, the imagination borne by these objects becomes a means of developing a biography of things that weaves memories and knowledge through a game of free, informed associations respectful of the complexity of the present debate on the re-thinking of the role of museums in managing the ethnographic heritage that is the result of European colonial history.

Soil Kinships presents a new production developed through this last pandemic year and focused on the construction of unexpected connections between the actual subjects of the artist’s research that go from the tools of the rural life in the Veneto region of his origin to the artefacts belonging to the communities he encountered during his anthropological research in South America and Portugal. These visual and cultural associations become an installation that takes up the entire gallery space, formed by a series of photographs, ceramic sculptures and spontaneous plants—brought together by the idea, both literal and figurative, of being rooted to the soil and by the artist’s will to generate new kinships among environments and cultures in continuous migration.The objects analyzed by Zanin are treated as activators of social and human relations. These new juxtapositions and mixes result from intercultural processes and thus no longer manufactured goods but rather new bodies, heirs of their original environment and now in a dialogue among themselves.

(Based on a text by Matteo Lucchetti)

Torch shows a homage to the recently deceased photographer Posthuma de Boer. Unjustly unknown outside the Netherlands – for more than 50 years, Eddy Posthuma de Boer has travelled the world, visiting over 80 countries to capture human life. His photographs have been published in newspapers and magazines such as Het Parool, De Volkskrant, Time-Life, Avenue and Holland Herald, alongside numerous photo books compiled by himself. As a contemporary of Ed van der Elsken and Johan van der Keuken, he can be seen as one of the most important representatives of humanist photography in the Netherlands.