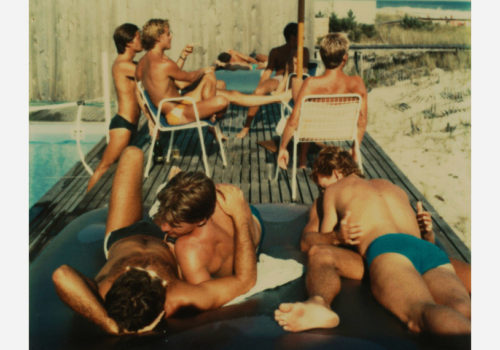 Partly due to its close proximity to a culturally booming New York City, Fire Island attracted “the best and the brightest” of the gay community— artists, writers, models, photographers, designers, and actors came to the Pines each summer.  The island became known not only as a safe summer enclave for gay men, but an exuberant and celebratory one.  The summers Bianchi documented were a golden age, and remain the last fleeting moments before the AIDS crisis laid waste to an entire generation of men. The dream-like Polaroid images of dizzying parties and sculpted bodies can initially seem superficial; however the real people in these images dancing, kissing, holding hands, and playing in the sun are friends, lovers, and men creating a community where for the first time, they were free to love.

Tom Bianchi began photographing on Fire Island with a Polaroid SX-70 camera which proved to be the perfect tool— unassuming and immediate. Many of his friends and subjects, who were still closeted and extremely wary of having their picture taken, felt comfortable in front of both Bianchi and his camera. “At first, I shot subjects without identity to ensure anonymity for those who needed it, focusing on atmosphere.  As time passed, friends became comfortable with the smiles on their faces being recorded. I quickly saw that I had the makings of a book. People saw what I was doing and came to welcome me, camera in hand.”
Bianchi’s Polaroids exist now as precious relics from another time. The Polaroids have softly bent corners and subtle signs of wear, reminders that these photographs have the unique ability of being born in the same moment they documented. The friends and lovers in these pictures held the actual objects in their hands as they created the moments the images capture.

The sense of joy is so palpable in the scenes from the Pines that it is even more devastating to comprehend how violently this time came to an end. Bianchi describes AIDS as a holocaust that devastated a generation, a horror that forced these men to change the very way they saw themselves.  In the context of the devastation and the discrimination that followed, Tom Bianchi’s heroic role in preserving this time has provided a vital layer of cultural and social history.  The love and camaraderie captured on Fire Island during those summers is a record of the life and vitality lost to AIDS, and a reminder in the years that followed of what needed to be regained.

Tom Bianchi was born and raised in Chicago, graduating from Northwestern University of Law in 1970. While working as a corporate attorney in New York, Bianchi began visiting Fire Island every summer, photographing, painting, and drawing on the weekends.  After Bianchi’s partner died of AIDS in 1988, Tom turned his focus towards photography, publishing Out of the Studio, a candid portrayal of gay intimacy.  Tom went on to publish numerous successful monographs. In 1993, Tom co-founded a biotech company to develop new H.I.V./AIDS treatments. Tom Bianchi’s work has been exhibited and collected internationally. Tom Bianchi now lives and works with his husband Ben, in Palm Springs, California.