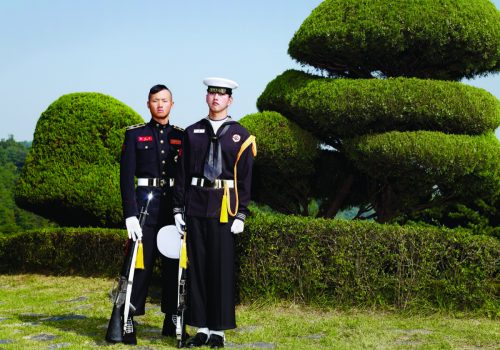 Since its establishment in 1953, the DMZ has paradoxically been regarded as one of the world’s most heavily militarised areas. With border tensions easing, and unprecedented progress in inter-Korean relations, recent measures – including the demolishing of twenty guard posts in December 2018 – can be seen as a first step towards disarmament.

Positioned within this context, the exhibition at KCCUK intertwines the conceptual pillars of time and space to link the past, present and future of the DMZ. Kyungah Ham’s work Detail From SMS Series and Balls (2017-18) references the current situation today. In her embroidered canvases, colourful designs are encoded with camouflaged messages in English and Korean, including quotations from South Korean pop songs, internet slang and recent newspaper headlines. Produced by North Korean seamstresses contacted indirectly through brokers, these abstract compositions – designed to avoid censorship from North Korean authorities – bear witness to an extraordinary phase of change in the region. Meanwhile, the transition of time is explored in Min Joung-Ki’s 1981 and 2019 canvases, expressing a historical geography encompassing both past and present, while stirring our imagination of a future he had envisioned. Also on show are photographs by Heinkuhn Oh in which soldiers are portrayed as individuals, not just as a part of the military – offering different perspectives on lives forced into a political situation. His works depict the conflict soldiers face as both an “individual” and a “group”, as “I” and “us”, presenting the obscure anxiety of this duality.

Minouk Lim prompts enquiry into the historical context of the DMZ in dialogue with the present. Monument 300 – Chasing Watermarks references a massacre recorded to have taken place in the DMZ’s Waterworks Center in Cheorwon. Involving the tragic, unjust death of 300 people, Lim depicts a story of which the end is unknown, inviting viewers to imagine and interpret this forgotten or concealed history. Yeondoo Jung’s photographic installation also interweaves the past with the present, using the central motif of a bridge which can be seen from the Dora observatory in South Korea, overlooking the DMZ. Combining documentation and mise-en-scène, actors pictured alongside tourists inside the observatory blur the distinctions between the past and the present, fiction and reality.

Whilst the exhibition offers a unique insight into the complexities of the Korean peninsula, research and archival material offer alternative views of the DMZ’s surroundings, encompassing themes such as landscapes, villages, military and natural bio-environment. For instance, Kyung Jin Zoh’s (Professor of Landscape Architecture at Seoul National University) extensive study on the nature of the area culminates into 248 km Wild Garden, A Beautiful, Border (2019), presenting a variety of plant samples.

Archive photography of the military and villages near the border also present the DMZ with material from both public institutions and personal collections, including regional residents as well as U.S. soldiers who were stationed in the area. Individual images may only document one version of the past, but as an assemblage, they reveal the complexity beneath the surface. By shedding light on these different perspectives, the exhibition prompts viewers to speculate on the future potential of the DMZ region through different lenses that go beyond the artistic realm.