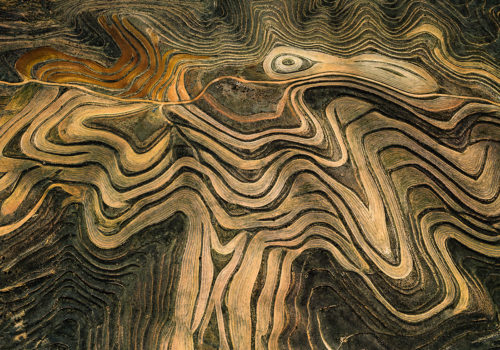 Photographer and designer from Munich, Germany, Tom Hegen focuses on aerial photography projects that focus on human interventions in natural environments. It all started when in 2015 he visited an exhibition based on the term Anthropocene, a word that etymologically means “The Age of Man.” This term was proposed by a council of scientists and refers to a new geological epoch that is characterized by the advent of humans as the main force of change on Earth, surpassing geophysical forces.

Very concerned, the photographer wanted to approach this subject with his own visual language wanting to draw attention to relevant environmental issues to make us aware of the urgency to act.

His aerial shots accurately blur the notions of scale, time, beauty, and consciousness. His images resemble expressionist paintings and give the impression that man becomes an abstract artist who shapes the surface of the earth.

With the help of the drone, the photographer uses new technologies to convey a message as urgent as it is poetic. Seen from the sky, these landscapes are as eloquent as they are disturbing in their beauty and the harshness of their message.

“We are leaving an irreparable footprint on the surface of the Earth to meet the daily needs of humanity. I try to educate readers about this by examining the extraordinary forces we bring into play to own and alter our environment.” Tom Hegen

Your first photographic click?
Tom Hegen : When I was 19 years old, I spent a year in New Zealand doing a civil service program instead of joining the military service in Germany. The weeks before I departed, I won a digital camera as part of a design competition. My first own camera! For sure I brought it with me to New Zealand and started to document the trips I made over the weekends in the spectacular landscape of this beautiful country. This was also the beginning of my interest in photography as a genre and landscape photography in particular.

The man of images who inspires you?
Tom Hegen : Not particular photography but I really admire the work of Anselm Kiefer.

The image you would have liked to make?
Tom Hegen : “Earthrise” aboard of Apollo 8.

The one you regret you didn’t make?
Tom Hegen : Every time I come back from a shoot I have regrets.

The one that moved you the most?
Tom Hegen : My grandpa’s dead hand.

And the one that made you angry?
Tom Hegen : The body of work by Sebastião Salgado documenting unequal sceneries around the world.

If among your images you had to choose only one?
Tom Hegen : N°TGS01 from THE GREENHOUSE SERIES.

The quality needed to be a good photographer?
Tom Hegen : Passion!

The secret of the perfect image, if it exists?
Tom Hegen : It doesn’t exist. The ability to create a good photograph is more a feeling than a formula.

The person you would dream of photographing?
Tom Hegen : I don’t photograph people.

The one you use today?
Tom Hegen : Fujifilm GFX100.

Your favorite drug?
Tom Hegen : Being connected with what you do to forget the world around you.

The best way to disconnect for you?
Tom Hegen : Power nap.

An image to illustrate a new banknote?
Tom Hegen : A photograph of a very happy penguin to remember that happiness can’t be bought with money.

The job you would not have liked to do?
Tom Hegen : Insurance broker.

Your greatest extravagance as a photographer?
Tom Hegen : I’m not particularly extravagant but care more about projects and how to make them happen.

The values you wish to share through your images?
Tom Hegen : Appreciation for all resources that we have.

The city, country or culture you still don’t know and dream of discovering?
Tom Hegen : Japan.

The place you never get tired of?
Tom Hegen : Corsica (French Island in the Mediterranean Sea).

The most photogenic city according to you?
Tom Hegen : Venice.

If God existed would you ask him to pose for you, or would you opt for a selfie with him?
Tom Hegen : Neither. I don’t believe in god and if I would, I would like to ask him why he invented greed, jealousy, policy, borders and weapons.

The image that represents for you the current state of the world?
Tom Hegen : An image of a tremendously giant anthill that is about to collapse in itself.

What is missing in today’s world?
Tom Hegen : Unity and respect throughout all countries, religions and people.

And if everything was to be remade?
Tom Hegen : Equality for all living beings.