Stephen Shames, Power to the People: The Black Panthers in Photographs 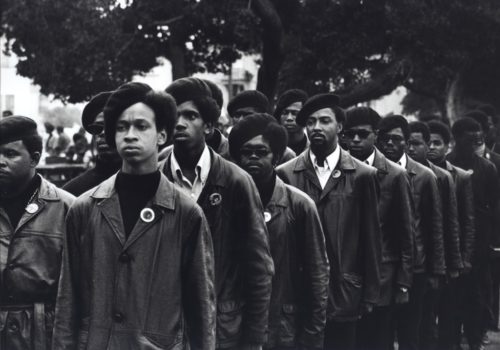 1970: a young black protester, seated on top of a statue outside the New Haven, CT, Courthouse shouts as he raises his fist in the air. This iconic image brings to mind the gloved fists of the American athletes John Carlos and Tommie Smith raised in black power salute at the 1968 Olympic Games in Mexico. The gesture has become a symbol of African-American struggle both in the United States and abroad. It also became a sign of solidarity for the Black Panther Party, a revolutionary civil rights organization founded in 1966 by the political activist Bobby Seale and the freedom fighter and intellectual Huey P. Newton.

This and other images, fifty in total, are on view at the Stephen Kasher Gallery in New York, as part of a knockout exhibition commemorating the 50th anniversary of the movement. The images are the work of the New York photographer Stephen Shames, who documented the daily life of the organization during the peak of its activity. The photographs show party members and leaders, protests and tragedies — such as assassinations of some key figures — as well as the organization’s various initiatives: teaching, food programs, political graffiti, and distribution of tracts and other publications. Among the latter was the newspaper The Black Panther, published between 1968 and 1982 by an entirely female staff (in 1970, over half of the party’s members were African-American women). Sixty issues of the newspaper are on display, framed alongside the photographs, and surely appear as one highlight of the show.

Together, these various documents bear witness to the lasting legacy of the Black Panthers and to the radical nature of their struggle for racial and class equality. Admired, reviled, emulated, and misunderstood, the Black Panthers offered one of the most creative and influential responses to racism , economic and social discrimination based on skin color in the United States. This creativity was unleashed notably on the pages of their newspaper, with its bold, evocative graphics and witty, trenchant headlines. Bright-colored, flaming-red and deep-black print was heavy with ink and political meaning.

Stephen Shames’s photographs have undeniable historical value, even before dazzling the viewer with their lush, black tones. They plunge us into the heart of the civil rights movement, but also offer insights into the photographer’s creative process and old-style journalism rarely encountered today: attentive to the human element and staying clear of the pitfalls of sensational journalism. There is no bloodshed or excessive violence. What matters here is information, the historical message conveyed by a scene; photographing an object or a wall is investigative research. There are a number of simple, wide-angle portraits of people who aren’t doing anything special … besides having a black skin and fighting for their rights. The penetrating gaze of these men and women hints at the tragic history of a community which, fifty years later, even while these images seem to evoke a bygone era, is still grappling with racial inequality and injustice.

Stephen Shames: Power to the People: The Black Panthers in Photographs