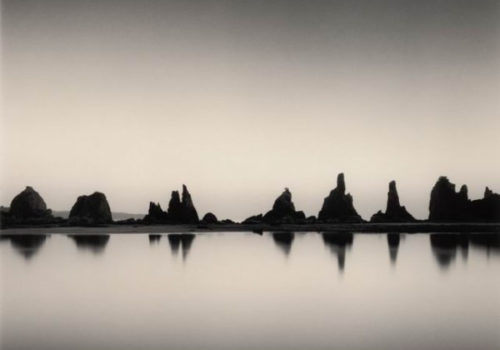 Throughout his career, British photographer Michael Kenna (born in Lancashire in 1953), has traveled the world looking for emblematic natural and urban landscapes. These well known spaces are a playing field for the photographer who experiments with the power of black and white, minimal compositions, and the enigmatic characteristic of long term exposure times used at dawn or dusk. The 36 silver prints presented at the M97 Gallery are no exception.

After his first individual exhibition at the Shanghai Art Museum in 2007, Michael Kenna’s works are once again being honored at this gallery recently nominated “Best Photography Gallery” by the Photographer’s Companion Magazine. The audacious combination of these two series, Hokkaido (taken between 2004 and 2011) and Huangshan (taken between 2008 and 2010), is a deliberate choice by the artist and Steven Harris, director of the M97 Gallery.

Hoping to immerse spectators in his pictures, Michael Kenna only uses small formats, specifically 20 x 20 centimeters, for the occasion. This choice could seem to be an obstacle, but the opposite is in fact the case. Spectators are forced to come close to the pictures, observing the fine grain, the many shades of white, the glow of the blacks, and the experiments with compositions.

Michael Kenna willingly tricks spectators, forcing them to question their perceptions of these well known landscapes. He declares “My works are like Haiku more than prose. I don’t describe what is there. Instead, I tend to employ one or two elements as the catalyst of my imagination.” He even pushes photography’s limits, giving it a pictorial aspect, where trees resemble paint strokes and the fog, an ink wash.

Beyond these formal aspects, the work of Michael Kenna can be associated with Chinese and Japanese traditions while at the same time affirming his own personality, using the Huangshan mountains and Hokkaido landscapes that have long fascinated local poets and artists. It also would appear that the pictures, both traditional and contemporary, are in fact timeless.

These two series, presented for the first time side by side, demonstrate the importance of memory, time and atmosphere present in the work of Michael Kenna. Preferring the power of suggestion to that of description, the artist brilliantly provides multiple reading levels to his minimalist representations.