Serge July, in love with New York and photography 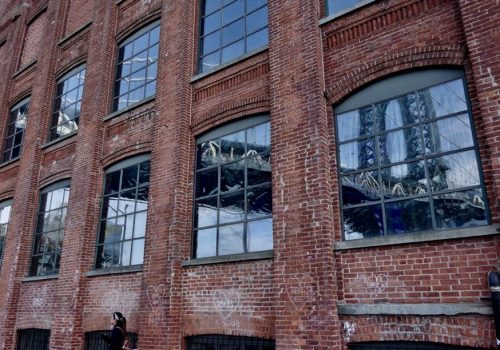 On the occasion of the release of his Dictionnaire amoureux de New York ,the former director of Libération exposes 17 photographs of reflections on the buildings of the city at the Basia Embiricos Gallery in the Parisian Marais.

We know Serge July for the success he has achieved by transforming Libération, a leftist scoundrel, into a newspaper of reference between 1973 and 2006. He is known as a political editorialist at Europe 1, France 3, TF1, LCI, as documentary filmmaker, but until then not as a photographer.

However, the first images that he remembers are those of the defeat of the French army at Dien Bien Phu (March 13 – May 7, 1954) published by France-Soir whose father is a faithful reader. He is 14 years old and France-Soir and photography enter his life.

In 1972, the Left Proletarian, a leftist movement called “Maoist” plans its dissolution to avoid a terrorist drift, Jean-Claude Vernier, Philippe Gavi, Jean-Rene Huleu and Serge July announce the creation of Liberation. The daily is supposed to occupy the activists and prevent them from going astray.

The first issues appeared in spring 1973 and Serge July quickly became the leader, some would say the “political commissioner”. He wants according to the formula stated a few months earlier to make a “France-Red Evening”. He who, by his own admission, has practically no photographic education immediately calls on professional photographers close to the leftist movement, Gérard-Aimé, Horace. He does not want an illustrated newspaper, he wants a newspaper where information is not only text, but also image. In September 1973 was born the first photo agency linked to the newspaper, Fotolib, a worker production cooperative, of which Serge July will be a member of the board of directors.

But Fotolib does not have the strength to strike, nor the talents of an agency like Gamma with which Libération will quickly pass agreements for the supply of photographic reports on a cheap basis. At the end of the 70s, Christian Caujolle, a young normalist interested in photography, got closer to Jean-Luc Monterosso and Henri Chapier who created the association Paris Photo. Caujolle becomes a freelancer at Libération where he chronicles the photographic life.

“On April 16, 1980, early in the morning, Serge July called me home, telling me bluntly that Jean-Paul Sartre had just died … / … I went to Brassaï, rue du Faubourg Saint-Jacques, who told me generously confided unpublished. Then with Gisèle Freund, who did the same. Henri Cartier-Bresson tells me that I do not have any other interesting pictures than the famous one of the philosopher on the Pont des Arts … / … I was happy to see that the number was worthy, the iconography excellent and that the documents I had provided were widely used and without alteration “writes Christian Caujolle in Special Circumstances – Memories – Ed. Actes Sud 2007

This coup de maître will allow Serge July to impose Christian Caujolle as director of photography of the newspaper in 1981 to the re-release of Libération after a severe crisis. For this “new” daily newspaper “we had to make a move” says Serge July. Thanks to Caujolle, all that Magnum agency has photographers in Paris on May 21, 1981 is in the Pantheon for the investiture of François Mitterrand. Henri Cartier-Bresson who devotes himself to drawing then took over his Leica for the occasion. “We developed the Cartier-Bresson films at the Libé laboratory,” says Serge July, “it was really special”.

“My photographic education is at Libération that I made it by making the newspaper,” he says today three days after the opening of his first photo exhibition.

“I always had cameras”

Like many post-war children, he is offered a Kodak brownie. A black plastic box with which he does, like everyone else, “banal photos”. But when he gets married, it’s a Nikon he asks for as a wedding gift. Yet until liberation, photography will not be at the heart of his concerns. In Clarté, the newspaper of the communist students, it makes in the 60s numerous reports. “But I did not mind photography. And in May ’68 he will not make any more image. He militates.

It was only in 1975, in Portugal, that his Nikon appeared. He photographs Jean-Paul Sartre and Benny Levy talking with soldiers of the Armed Forces Movement (MFA) and launches a report on the occupation of Alentejo lands. After this report, Libération occupies more and more and photography remains a hobby. But he will always do …

During his many travels in New York, he is fascinated by the aberrant glass facades of the city’s buildings, by the reflections they form while playing with the ocean lights. Serge July does not travel with its bulky Nikon or Canon, but like everyone with his smartphone. Like everyone else he makes pictures, as everyone else is writing. But the difference between Mister Everybody and a writer or a photographer is the eye, the feeling and the talent to express it.

It is however very surprised when Basia Embiricos, “a neighbor in Normandy” to which it shows his images proposes to him to expose them. He sends the files to Picto Lab and “I was on my ass when I saw the result. He said modestly.