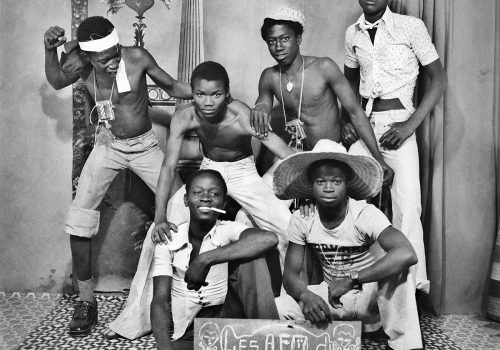 Sanlé Sory was born in 1943 in Burkina Faso. He left his village of Naniagara, in the southern region of Banfora, in 1957 to settle in Bobo-Dioulasso, cultural and economic capital of what was then the colony of Upper Volta. He drew patterns for seamstresses in his home region.

At that time, living in the city required having identity documents. After a train visit to Ouagadougou, the administrative capital, Sanlé Sory realizes that the photographer in charge of identity portraits earned a good living by exercising a profession new to him. He decided to devote himself to photography and to learn this profession that fascinated him.

Young apprentice with Kodjo Adamako, a Ghanaian photographer, Sanlé Sory began his career photographing road accidents for the gendarmerie. He officiated in the room, before developing and shooting, then moving to medium format like most African photographers of his generation. A privileged witness to the rapid evolution of his country and his city, Sanlé expressed in images the frontal collision which then takes place between modern life and the traditions in his region of the Hauts Bassins.

Most of his clients then ask for identity photos, front face cut to the shoulders,  and especially unsmiling in order to respect the rules of the administration. Sory reverses this model little by little and lets talk about his creativity. The idea of ​​making larger prints, changing backgrounds for shooting, making full length photos, with many accessories, is a liberation, a kind of emancipation, in an Africa in turmoil . The souvenir photo becomes a popular gift and the studio of Sanlé Sory is a place of fantasy.

Photographer invested in his work, he combined  reportage, illustration for record sleeves,  official images and his posed portraits  in the studio. A prolific photographer, he distinguished himself in particular from the competition of the three other major local studios, thanks to the painted backgrounds, he designed, whether it is a modern city, a seaside, an antique column or an airplane bridge.

His black and white pictures illustrate the euphoria of  youth who gradually freed themselves from the shackles of a still very traditional Voltaic society. His images show the quest of these young people sometimes confused but always cheerful, facing the frontal irruption of modern lifestyles. They are emancipated in their poses, eyes or dress.

Whether immobile or in mischievous movements, his subjects evoke the distant and melancholy everyday life of the isolated cities of the African continent, but also the vitality of youth in the decades following independence. His shrewd eyes document with unfeigned candor  the fusion then operating between tradition and modernity. The black and white sublime this time, before the 24×36 format and color film only accentuate what William Eggleston calls “democratic forest”, an infinite dilution of the photographic gaze in the public space.

These attributes are manifested in printed t-shirts, a transistor, a bicycle, a scooter or a motorcycle, a plastic pistol, wedge heels, a flower pot, vinyl records or a guitar, all elements referring to an elusive modernity. Sory composes entire series around these elements, affirming a personality rooted in his time.

Traditional clothing, headdresses and formal wear are also featured in these images. Dancing parties, eccentric outfits or candid poses are favored by Sanlé Sory. He travelled by motorcycle or with his 2CV van to the remotest villages of the bush around Bobo-Dioulasso. Taking with him a generator and a turntable to dance in the most remote parts of the bush, going towards the Malian border and the Kou Valley.

The ardor of this Voltaic youth gradually dissolved in the paternalistic indolence of the reign of General Lamizana. With the arrival of Thomas Sankara in 1983, the Voltaic society closed on itself while Upper Volta became Burkina Faso (“the country of honest men”) in 1984. Joy seems to vanish, on the marked faces that Sanlé Sory then photographs. They are impassive, even resigned. The magic of an era disappeared inexorably. The images he has captured over the past two decades are testimonies of a golden age when the vigor and carelessness were preserved forever thanks to these 6×6 negatives.

Sanlé Sory is known for his inventiveness and humility. The joy, the truth and the emotions that emerge from his portraits make him a singular photographer who has been able to convey the essence of Burkinabe youth. A privileged witness to the evolution of his country and his city, his shrewd eyes document with an unfeigned candor the fusion operating between tradition and modernity. At the time of yéyés and singles, his photos breathe an insouciance and a thirst for freedom unheard of.

Unknown, forgotten or disreputable, the golden age of voltaic photography today is essentially Sanle Sory whose images maintain the flame of a societal and cultural effervescence unique in its kind. Surrounded by natural elegance, his photographs of Bobo-Dioulasso evoke Renoir’s saying that “the more local, the more universal.”