Rose Mandel, A Sense of Abstraction 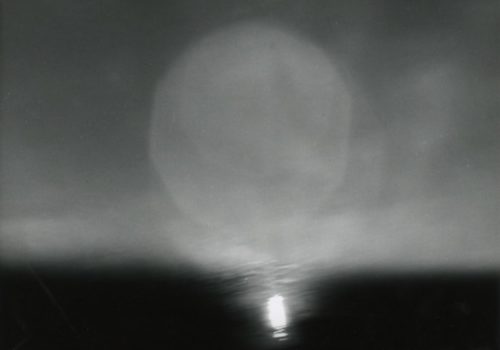 In New York, an exhibition of the work of American photographer Rose Mandel (1910-2002), comprises portraits, close-up abstracted views of nature, and dynamic seascapes made between 1946 and 1972. The exhibition’s title, A Sense of Abstraction, refers to the primary visual and psychological currents of Mandel’s work: symbolism, surrealism and abstract expressionism.

Born in Poland, Rose Mandel studied art in Paris, and child psychology with Jean Piaget in Switzerland. She fled Europe in 1942, arriving in Staten Island, New York after a perilous journey in steerage on a steamer carrying hundreds of émigrés, including the celebrated French artist Marcel Duchamp. Her country destroyed, family members and friends killed in the Holocaust, she made the San Francisco Bay Area her new home.

Rose Mandel is closely associated with the well-established modernist tradition in Northern California photography as represented by Edward Weston, Ansel Adams and Imogen Cunningham, yet her nature studies and abstract landscapes also belong to the broader American landscape tradition exemplified by Minor White, Walter Chappell, Harry Callahan, Ralph Eugene Meatyard, and others who explored complex symbolic meanings in their images of the natural world.

When she arrived in San Franciscio, an introduction to Edward Weston inspired Mandel to study photography as an art form. She began formal studies in 1946 with Ansel Adams at the California School of Fine Arts (now the San Francisco Art Institute) in the very first class of the photography department Adams established. Mandel felt that Adams had “saved her life” by showing her “a new way to see the world, through the lens of a camera.”

During this period Mandel also developed a collaborative relationship with another instructor, Minor White, who was only two years her senior. White shared Adams’s reverence for the renowned photographer Alfred Stieglitz, stressing Stieglitz’s theory of equivalents. As the photography historian David Travis has observed, “Adams proved to be the mentor Mandel had hoped for in Weston”; however, “Mandel’s nascent ideas about photography matched White’s about psychology as student and teacher encouraged each other.”

Mandel thus became an active participant in an exciting period in Bay Area art and photography that was largely centered around two significant educational institutions, the California School of Fine Arts (now the San Francisco Art Institute) and the University of California, Berkeley, where Mandel worked from 1947 to 1967 in the art department. Early portraits (1947-56) of artists including William Theophilus Brown, Phyllis Manley, and Paul Wonner, UC Berkeley art students who befriended Mandel, are included in this exhibition at the Deborah Bell gallery.

From 1946 to 1948, Mandel photographed reflections in store windows, and graffitied walls, of San Francisco. It is likely that Lisette Model, another immigrant using the camera, influenced Mandel; her own photomontage-like images of pedestrians and mannequins reflected in New York store windows were exhibited in 1946 at the California Palace of the Legion of Honor, San Francisco. In 1948, the San Francisco Museum of Art (now the San Francisco Museum of Modern Art) gave Mandel her first one-person exhibition, On Walls and Behind Glass, comprised of Mandel’s sequence of photographs, incorporating such reflections and graffiti. Many years later Mandel acknowledged the surrealist elements of spatial ambiguity and discord in her photographs that expressed the devastation she still felt after the war and the Holocaust.

Later, landscapes made in and around the shoreline of the Berkeley Marina and San Francisco Bay became Mandel’s primary focus. Meditative images that merge water, shoreline, and expanses of sky in subtle gradations of tone from dark to light are mood-evoking, abstract arrangements of organic shapes, some capturing dramatic nocturnal skies through combinations of dense, advancing, and often surreal, clouds with moonlight. In 1960, The Museum of Modern Art, in New York, included six of Mandel’s landscapes in The Sense of Abstraction, a seminal international exhibition of contemporary trends in abstract photography.

From the mid-1960s through about 1972, Mandel moved away from the intimate contact-print format, realizing most of her large format images, including works she referred to as “writing-on-water” and other minimalist images, all of which Mandel considered deeply personal metaphors for inner feelings. Mandel’s last photographs were made between 1970 and 1972.