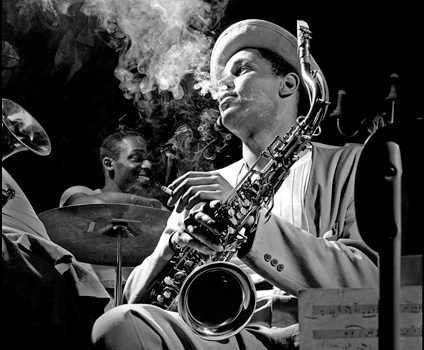 Robert Mann Gallery presents an online exhibition of works by Herman Leonard. This collection of smokey, nostalgic, and timeless photographs depict some of the most renowned jazz musicians, including Billie Holiday, Sarah Vaughan, and Charlie Parker. These photographs illustrate intimate and raw moments of performance: Billie Holiday reaching her arms out towards the audience, as if grasping for her next note; Chet Baker, hidden behind his trumpet, an embrace that feels like a private moment only captured by Leonard; and Nat King Cole, making direct eye contact with Leonard, as though the two were performing a duet.

Herman Leonard’s photographs are a unique record of the jazz scene in the 1940’s, 50’s and 60’s. Throughout his long life, he traveled and lived around the world, capturing images with his distinctive style. Whether he was photographing Miles Davis, Frank Sinatra, Louis Armstrong or a street musician in his home town of New Orleans, Herman’s smile, warmth and engaging personality continued to open doors for him and his camera; to reveal a world we might have missed. Certainly Herman Leonard’s iconic photographs will long be remembered not only for their enduring historic significance, but also for their breathtaking artistic beauty.

Considered one of the most prominent jazz photographers, Herman Leonard (1923-2010) was born the son of Romanian immigrants in Allentown, Pennsylvania. He first picked up a camera at the age of nine. Shy by nature, Leonard found photography to be a way of connecting with those around him —from his high school peers to famous figures like Harry Truman and Martha Graham, whom he photographed as an assistant to master Canadian portrait photographer Yousuf Karsh. Later assignments would take him to East Asia, where in the 1950s he served as Marlon Brando’s personal photographer, and Paris, where he worked as a correspondent for Playboy and Time magazines. He established a studio in the heart of Greenwich Village in 1949, and with his passion for the music and kind respect for those he photographed, he was accorded an unprecedented inside view of the jazz scene around the world.

Leonard’s works are found in numerous public collections including the Smithsonian Institute and Lincoln Center. While his New Orleans studio and at least 8,000 original prints were destroyed in 2005 by Hurricane Katrina, his complete collection of over 35,000 negatives survived and have been fully archived through a grant from the Grammy Foundation.