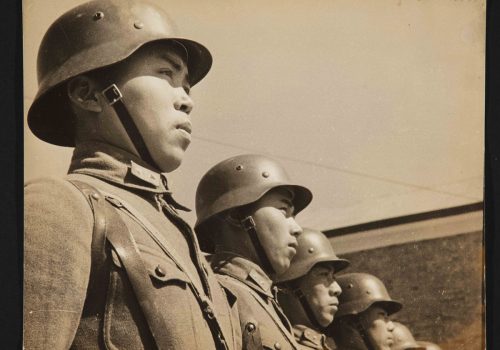 Alberto Giacometti, Ata Kando, Re Soupault, Robert Capa, Emile Muller, Bernard Matussiere … It is with this word so just that one day, Henri Cartier-Bresson saluted in writing the work of memory of the latter: “to Bernard, another « habité » of the rue Froidevaux and in memory of Capa. Best regards, Henri. ” Why ? The 37 is an island in the middle of an ocean of creation. Located in the heart of Montparnasse, the artistic village of the XIVth arrondissement developed around the Great War, before and after, thanks to the painters of the prestigious “School of Paris” with its residents of the Ruche (a little further, street of Danzig in the fifteenth century); School that attracted like flies the students of the Académie de la Grande Chaumière from all over the world to join “The City of Light” (so called since the 17th century, because of its public lighting … not its intellectuals!). It is these artists who have become tenants in the workshops of this neighborhood of choice, who will attract writers, sculptors, engravers, models, milliners, architects, composers, musicians, singers, filmmakers, publishers, poets, journalists … and photographers under the auspices Art Deco (International Exhibition of Paris of 1925). At this golden age of artists, everyone was crowded at night on the terraces of the big breweries on the boulevard du Montparnasse – the authentic phalansteries and “distilleries of the spirit” of this village, from the Dome to the Select, from the Coupole to the Rotonde through La Closerie des Lilas.

No need to say that the ateliers were very much in demand! A boon for the promoters of the time. The number 37 of rue Froidevaux gathered at this address, in the courtyard more than on the street, less than a dozen studios of artists since the beginning of the twentieth century. A small family of fine arts. “A bunch of broke, wonderful researchers of the useless, inventors and contributors of twentieth century modernity” wrote a critic of American art of passage. This extravagant and bubbling between two wars is as surely inhabited by this avant-garde, as their workshops turned to the East whose light still illuminates their works … and our present.

Fans of the history of Parnassian art, guardians of an engulfed memory. In the ruins of the house on the now-destroyed courtyard of Emile Muller, his photography master, Bernard Matussière found the remains of Atelier Robert CAPA. To you and for you, privileged visitors, some of these little-known treasures are presented, sold out. A big first! On an idea of ​​the mayor of the XIVth arrondissement, Alizé Le Maoult, photographer and curator came to offer us this exceptional exhibition day, as part of the Month of Photography in Paris. Many thanks to them for this beautiful and happy initiative.

As pointed out Patrick Modiano – another “cracked” of the 37th – the Nobel prize for love literature of the telephone directories, Robert CAPA figured well in the 1938 edition of the Parisian directory of the XIVth. His number was DANTON 75-21 and he opens « Chien de Printemps », written in 1993.

With Bernard Matussière, who has the extreme kindness to welcome us, photographer who owns his own shooting studio in this courtyard, but also Michel Lefebvre, journalist to the “World” and mad of Spain, we have written twice the history of this place. In “Robert CAPA. Traces of a legend. (1933-1954) “which is his only French biography, we told the Parisian life of this Hungarian became American. Then, in the catalog raisonné of “La Valise Mexicaine” in the chapter of its origin, forged here, at 37 rue Froidevaux, we endeavored to explain the conditions of production of what has become a work in itself.

Welcome to the archeology of photojournalism, a small fundamental branch of Capas’s Studies!

Arrived in exile Gare de l’Est in Paris, in the autumn of 1933, fleeing fascism on the eve of his twentieth birthday – Endre Ernő

Friedmann has only one slim suitcase and his fixed-lens Leica I, which a friend offered him in Budapest. But his baggage is rich in his Berlin photographic experience at the Dephot cooperative; its Hungarian cultural roots and an innate sense of contact, despite the obstacle of foreign languages.

Four years after getting off the train, then anonymous and miserable, he crossed the gate of 37 Rue Froidevaux under the pseudonym Robert Capa (since April 1936). Here he became, according to his cover of the Spanish Civil War, “the best war photographer in the world” according to his Hungarian friends from the “Picture Post” in London, and able to create his very first company. In his small studio on the second floor, he builds from scratch “L’Atelier Robert CAPA”, with laboratory assistant and secretary; but also the help of her brother Cornell and Ruth Cerf, the pension friend of Gerda TARO, her partner met in Paris in September 1934.

Originality of this umpteenth Parisian photographic studio: it is not intended for shooting, it is from the start a hub! The Atelier Robert CAPA is incarnated in the development and printing, as a collective distribution center for agencies and illustrated press (European, as American) photographs of Robert CAPA, David “Chim” SEYMOUR and Gerda TARO.

It was at number 37 on rue Froidevaux that the “Mexican suitcase” was born … and the legend CAPA was born.