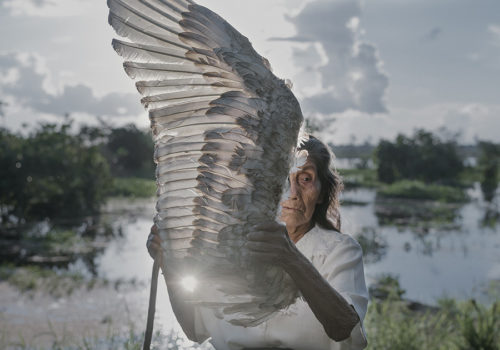 Following the discovery of the archives of Franco-German Charles Kroelhe, a 19th century pioneer of photography in the Peruvian Amazon who, according to legend, disappeared in the jungle, Arguiñe Escandón and Yann Gross undertake a research on this strange photographer in Peru.

When they find themselves in the heart of the jungle, Escandón & Gross feel a disconnection between these historical photographs that have shaped the Amazonian imagination and the sensitive experiences they have during their wanderings. In order to free themselves from the weight of past representations, the authors then engage in sensory work by participating in ceremonies and by dieting on medicinal plants. In this quest impossible to want to represent the mystery of the Amazon and its inhabitants (humans and non-humans), their images reflect an inner state linked to their own experiences.

During their stays, they also carried out research on medicinal plants and their photosensitive properties. So that the Amazon rainforest can reveal itself, they then made some of their prints on site from organic emulsions extracted from native plants.

Aya in the Quechua language, means: ghost, soul or spirit.

Through photography, installation and video, Yann Gross explores, often in a quirky way, how humanity shapes its environment and develops its identity. His projects focus on the construction of the imagination and a certain desire for escape. Winner of numerous prestigious international awards, his work has been exhibited around the world and published in magazines such as Aperture, Colors, Frieze, The National Geographic, The New York Times Magazine, The Sunday Times Magazine, Die Zeit Magazine and Das Magazin among many others.

Aya, published by RM, was recognized as one of the best books of the year 2020 by PhotoEspaña or the Lucie Foundation (NY).