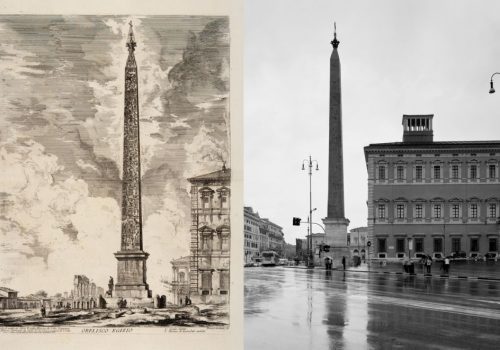 The Venetian artist Giambattista Piranesi was born three centuries ago (Venice, 1720 – Rome, 1778), and the Fondazione Giorgio Cini dedicates the exhibition Piranesi Rome Basilico to him and to a well-known Italian photographer. A way of comparing between lyrical cityscapes of Rome featuring the historic etchings by Giambattista Piranesi and the photographs by Gabriele Basilico depicting the contemporary city is on stage at Palazzo Cini Gallery at San Vio, in Venice.

Some of the great symbolic landmarks of Rome are immortalized in twenty-five original prints created in the 18th century by the Venetian engraver, selected from the complete corpus preserved in the Cini graphic art collections, and in twenty-six views of the eternal city by Basilico, shot from the same viewpoint as the Piranesi etchings, including twelve not shown in the exhibition The Arts of Piranesi. Architect, Etcher, Vedutista, Designer, staged at the Fondazione Cini in 2010.

The images reveal interesting similarities as well as differences in the representation of the topoi (place)that have fascinated so many travellers over time. Both the masters’ works are characterized by clarity of perspective punctuated with lucidity and luministic effects, that create a dialogue among the complex views of Rome, that is the scope for both the authors.

According to the curator Luca Massimo Barbero Curatore, “Gabriele Basilico, master of the urban landscape, in the views of Rome he shot in 2010 for the Fondazione Cini, had to deal with the ‘magnificence of ancient as well as modern Rome’, adapting the camera point of view to the vantage point of the Venetian celebrated engraver”. And, while doing so, photography managed to reveal the oversizing and dilatant view Piranesi applied to the monumental relics of Rome, as was common at the time in order to present their fascination to the Grand Tour travellers. Inspired by writer Marguerite Yourcenar’s wonderful description of Giambattista Piranesi in the early 1960s, Basilico took his camera to all the sites of Piranesi’s views to capture their modernity.

By the way, as Barbero points out, Piranesi and Basilico were both architects but they didn’t practice this profession; instead, they became magisterial interpreters of the architecture using paper, thin though powerful material capable of conveying ideas and models, transformations and fortunes of the world through the design of the space”.

Besides Piranesi Rome Basilico, is also possible to visit the house-museum: Palazzo Cini’s permanent collections, on the first floor, that include masterpieces by Filippo Lippi, Beato Angelico, Botticelli and Pontormo.

The exhibition Piranesi Rome Basilico, is curated by Luca Massimo Barbero, Director of the Istituto di Storia dell’Arte of Fondazione Giorgio Cini, in collaboration with the Archivio Gabriele Basilico. The catalogue, published by Contrasto and edited by the Institute of Art History, is conceived as a homage by the Fondazione Cini to Gabriele Basilico (Milan, 1944-2013) and brings together all the photos taken by the photographer for The Arts of Piranesi.