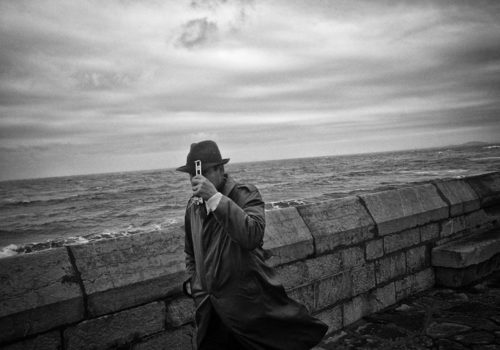 Journey through a privileged epoch

”Creeping around flea markets at dawn with a torch has never really been my cup of tea. I did attend a few auction sales, but for me these places smell all too much of mould and the death. My collection has been put together almost inadvertently, never with the rage of a real collector, except in the case of a few emblematic photo books. It has been built as a result of a relationship, often ephemeral but always true with an artist, throughout my life as a journalist, editor, and curator of exhibitions. In such a way that each of these images are rather like the calling card left by a friendly visitor. Before 1970, when we published photographs, the editorial committee or the secretary would receive the negatives which were stapled together with the text on paper. Then the graphic artist reformatted them with a soft lead pencil or taped tracing paper to them, wrote the dimensions on the back for the photogravure and sent them off to the printer. They would perhaps come back at times covered in ink, often bent, nearly always covered in fingerprints. After they were signed off for printing they were then discarded. Obviously, with the beginnings of the market and the opening of the early photo galleries in France, a significant change took place. At that time, photographic prints had not yet acquired the status of works of art that they have today. You only had to show interest in their work for the most generous of photographers to willingly give you a photo on the occasion of the publication of a portfolio… even more true when assembling an exhibition, or publishing a book. Of course, my collection carried the mark of my inclinations. A childhood friend bought a box of photographic plates and I could not wait to publish them and print the sumptuous portraits from the Studio Soler Pavia, active in our village in Tunisia around 1900. In the choice presented here, I have of course very much put the emphasis on Italy, with images from Patellani, the great Giacomelli and those of my friends Barbieri, Basilico, Berengo Gardin, Jodice, Radino, and many more still, as if proof were needed of my belonging to this land and this culture which for me is the bridge between Tunisia and France. I have made a point of putting the images of these great creators opposite my own photographs, not out of vanity, but simply because had I not known them, I would never have been able to make my own.”

The Mediterranean today
“I wanted to photograph the Mediterranean landscape in order to reveal what this most famous and surely most represented of landscapes is like today. It is often cited as the reference for the founding space of civilisations and thought… showing both its perennial nature and the landscape that Man has fashioned. If today I attempt to question it with a camera in my hand, it’s because before it was a landscape to be photographed, this Mediterranean was for me a land of warmth and dust, of fields of sun-blackened wheat, the smell of orange flowers, silky beaches and sunburn. It then took on literary tones thanks, among others to Camus, Char, Giono, Mahfouz, Pavese and Vittorini then a pictorial sense with Cézanne and the Provence and Languedoc regional painters. It became cinematographic with the Antonioni’s l’Avventura and became photographic in the 19th century with Bonfils, Rives and Sommers and the Tunisia of Rudolf Lehnert at the beginning of the 20th, with yet more photographers, all leaving for the South in search of a Greek and Roman past. The simple and direct aesthetics of these pioneers to which I belong, run through a great part of contemporary photography. Later, the photographs of Mario Giacomelli, emblematic of a binary Mediterranean universe of black and white, sun and shadows, had a profound effect on me, even if, or perhaps precisely because, they are inimitable. When photographing the remarkable Mediterranean sites, one flirts inevitably with the old favourites, the post cards. Their images are part of the more or less conscious iconography that we all carry and to which we are emotionally attached, whatever their artistic value. I too can claim a certain connection to them, applying myself solely to enlarge here and there details that show the effect of modern life. But naturally in my work, I acknowledge above all the heritage of the photographers of the 20th century whom I have watched, exhibited, criticised, published or taught for several decades. It is thanks to them that I can take these photographs today and, as the grown man that I have become, pay tribute to the dreams of my adolescence.”