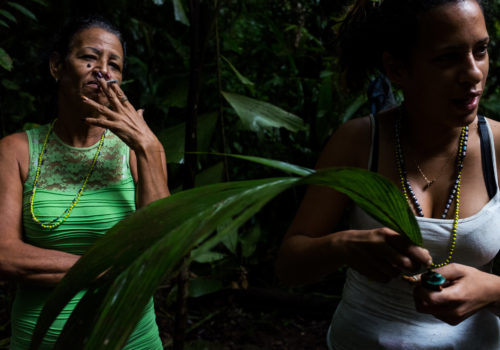 In the fourth video interview in the series “Photojournalism Now: In Conversation”, journalist and scholar Alison Stieven-Taylor talks with the Cuban-American photojournalist Lisette Poole.

A longtime correspondent for The Eye of Photography, Alison Stieven-Taylor created and directed a series of filmed interviews during the ongoing pandemic to understand “how photojournalists were impacted by the pandemic”. Each 20-minute episode gauges the pulse of a profession that is, quite paradoxically, shaken by the global economic downturn while being at the forefront of media coverage of the disease and its social, economic and cultural aftermaths. The interview format provides a vehicle through which “to talk about specific projects and issues, and to share the photographer’s inspiration and approach”.

The conversation between Lisette Poole and Alison Stieven-Taylor was first broadcast for the journalism blog, Photojournalism Now. It unveils Lisette Poole’s body of work on the extreme complexity of migration, the self-sacrifice and endurance it inspires, and the tenacity of the photojournalist who chose to cover and document the journey of two women in search of a better life. Since 2013, Lisette Poole has produced several series on the notions of the flow of migration, on the construction of double identities, on exile, memory and family. Published in 2013 in Vogue Italia, her series “Cuba in Flux” illustrates the cultural paradoxes of the Central American island, torn between a past reviving the socialist myth and liberal injunctions brought by cultural influences from the U.S. More recently, her series “Mexico City” (2020) and “Reggaeaton” (2020) simply underline the irreverent life of Central American cities, capturing the emergence of local counterculture, of the nightlife that is the pulse of a society.

Cuba, Brazilian Guiana, Peru, Ecuador, Colombia, Panama, Costa Rica, Nicaragua, Honduras, Guatemala, Mexico and the United States…Cuban migrants Marta and Liset needed to cross no fewer than eleven countries before entering the U.S., their final destination. These two women of different ages and temperaments, decided to leave Cuba together, all by themselves. Lisette Poole followed them from the beginning of their exile to the crossing of the American border, experiencing the same conditions as those experienced by the two migrants. The journalist (momentarily) renounced her American passport. She followed the two women on the road, negotiating her passing as if she were the third wheel of a coach tossed around by the will of smugglers, adapting her journey to the variable conditions of reception in the countries crossed. In this journey, the journalist became a stakeholder as well as a witness, telling what it means to look for exile.

In 2016 — the year of the migration of the two women — more than 50,000 Cubans migrated to the United States (Pew Research Center), a significant number compared to the population of the island (11.34 million, that same year). From 2014 to 2017, many migrants attempted to reach the United States, encouraged by the improved diplomatic relations between Cuba and its neighbor, at the initiative of President Barack Obama. Until 2017, a law called “Wet foot, dry foot” also favored Cuban asylum applications in the U.S. “There’s a legal loophole that grants automatic asylum to Cubans who make it to the border, a policy casually called ‘wet foot, dry foot’”, describes Lisette Poole. This law was repealed on January 12, 2017, a few days before the end of Obama’s presidency. Marta and Liset were aware of the near end of this law. The story implicitly underlines the urgency for migrants to escape this geopolitical timeline, influencing their flight, weighing upon their success to cross the border.

‘Liset was paying for the trip with money from Joey, her American boyfriend—a guy she’d met briefly back in January— and Marta had no money at all,’ explains Poole. The two women swing between legal and illegal routes. They follow recommendations given by friends or relatives, all living in the United States, having crossed the same roads. They share the misfortunes of Somalis, Haitians, Nepalese, of other women and men all in the same boat.

In the end the two women managed to cross the border, but at different times and via different routes. Liset for example, the younger of the two, crossed the border on foot, after a sixteen-hour walk, and was granted asylum in Brownsville (Texas), an American town on the Mexican border. Lisette Poole managed to capture the anxiety generated by the randomness of their journey. Asylum remains an uncertainty. The United States is only a vague promise, a future that only remains hypothetical.

The photographer’s work did not stop at the border. For three years on, she followed Liset and Marta’s integration into American society. They had different trajectories. Before settling in Austin, Liset lived in Chicago, Miami and Portland, somehow continuing her journey within the United States. She now earns her living as a stripper. On the other hand, Marta lives in New Jersey, doing small jobs, earning little, but way more than in Cuba. They both discovered the flip side of migration, while being a local hero when returning home.

‘La Paloma y La Ley’ has been published in Time, Stern, The New York Times and The Washington Post. This work underlines the physical, emotional and professional commitment a journalist requires to tell such a complex story, one of two women driven by the promise of the American Dream and the lengths they were prepared to go to. ‘La Paloma y La Ley’ recalls the tradition of engaged journalism, documenting a process (migration) in its entirety, giving depth and texture to an often-abstract notion, going beyond the superficial to give voice to a story that is too often inadequately represented. The book is published by Red Hook.

Best of August 2020 : Photojournalism Now : In Conversation with Robin Hammond