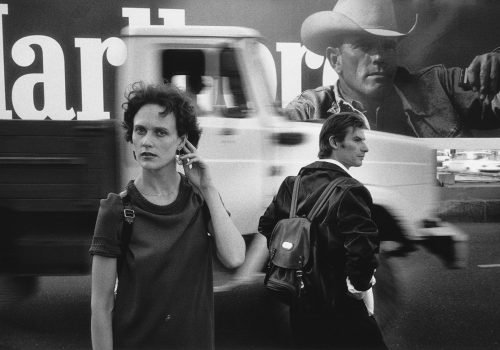 As part of the ‘Photobiennale-2020’, the Multimedia Art Museum, Moscow presents an exhibition by Igor Mukhin, one of the most prominent and influential modern Russian photographers, head of the photography workshop at the Rodchenko School, with which MAMM retains long-standing amicable and cooperative relations.

Igor Mukhin began his creative activities in the mid-1980s, when legalisation of the Soviet art underground first commenced in the wake of Perestroika. Perestroika acted as a catalyst for the birth of a new generation of Russian artists and photographers.

Igor Mukhin is not a chronicler in the literal sense of the word and his photographs could not provide an illustrative sequence to annals of political or social events. Mukhin takes pictures in the city, but his lens is not hunting for headline shots, it is more like a deep-sea probe that captures the atmosphere of the times, focusing on moments where the distinction between past and future seems unsteady and permeable.

With the accuracy of a sensitive seismograph, the photographer records signs of the tectonic shifts in society occurring in the 1990s. Mukhin chooses new subjects, young people and even teenagers. For them this period of painful changes was particularly difficult. But it was for them that this period revealed vast new prospects, perchance to dream.

Lovers are often reflected in Igor Mukhin’s lens. Their gazes, their poses and gestures become the symbol of a vital energy characteristic of our 1990s. This energy allowed us to survive the time of changes, laying foundations for the future.

In the 1990s young people of diverse persuasions attended rallies, whether they were Komsomol members, anarchists or democrats. Mukhin’s shots from these political meetings are striking, very different from photos of the processions with weary and frenzied adult participants. Mukhin brilliantly conveys this time of contrasts through the play of light and shade. Light and shade are expressive techniques and, simultaneously, the fully-fledged principal characters of his photographs.

Every one of Mukhin’s images is a plastic metaphor that can sometimes replace the storyline we can devise in our imagination. In some instances the photographs accumulate in a series, for example the pictures of Moscow dug up in all directions — the symbol of an era when life in the entire post-Soviet space was radically rebuilt.

Post-perestroika reality was a Babylonian mixture comprising the rudiments of the Soviet economy, Soviet aesthetics, the Soviet mentality and the new Russian reality born in pangs of torment.

Any photography by Igor Mukhin is characterised by meticulous precision and a cinematic sense of time within the static frame. Mukhin sees the world without filters of critical or romantic realism. The newfound freedom and the photographer’s natural ability to concentrate the energetics of a social space and a specific person in the frame enabled him to create the most vivid and internally dramatic image of Russia and its capital at the turn of the 20th to 21st centuries.