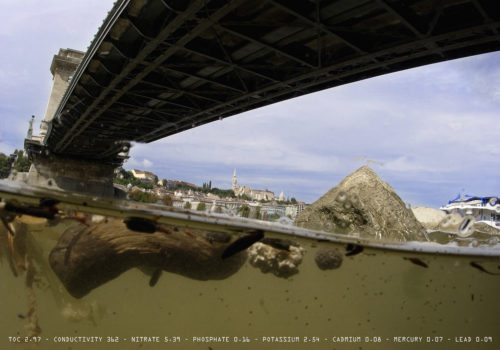 Andreas Müller-Pohle focused on the role and conditions of creation and reception of the photographic perception. His series, initiated in 2005, around water and its vital ecological function, offer a lyrical as well as a critical vision of this major issue.

Müller-Pohle developed a singularly original way of shooting: he photographed seas and rivers “from the inside”, either by capturing the swell at water level, or by submerging himself completely. It thus gives us to see banks, coasts, environment in their natural state, or even the deterioration which our industrial societies created, through liquid colors in which the photographer immerses himself, blending throughout a real “water movie”.

This extremely subjective point of view constitutes, in contrast to the purely documentary, factual and objective photographers characteristic of the “Düsseldorf School”, a resolutely poetic and innovative approach, unique in contemporary environmental photography. It allows for a Bachelardian reverie around aquatic environments, while maintaining a deeply critical look at the ecological deterioration of an element subject to the devastating laws of industrialization and consumption.

The exhibition and its catalog present the three projects produced by Andreas Müller-Pohle, illustrating this photographic device, and the visions that result from it.

The Danube, the only European river connecting the west to the east of the continent, enjoys an idyllic vision in the collective unconscious. It crosses a vast cultural, political, historical territory, from Germany to Bulgaria, marked, over more than 2000 kilometers, by the former Soviet regime. In his aquatic odyssey, from the sources of the river to its mouth, Andreas Müller-Pohle presents the Danube and its banks as a theatrical stage on which are inscribed the geographical, cultural and diverse perspectives of the countries crossed by the Danube, with strange and unexpected poetic metaphors, giving us to see this great river in an entirely new way. Under each image are inscribed the chemical analysis of the river, at the very location of the shot, a factual and scientific counterpoint to the poetics mentioned above.

Without the surrounding sea, Hong Kong would never have been the prosperous and sprawling city it is today, the archetype of modernity and its often negative side effects. It is this “oceanic culture of the city” that Andreas Müller-Pohle explores photographically, precisely from the sea itself in which he immerses himself, thus offering a series of surprising points of view, where mingle the astonishing architectural organization of its coasts and the obvious marks of an exuberant tropical nature still intact at times, but tragically threatened by industrial and technological cancer. These images give Hong Kong an unexpected perspective, of ambiguous beauty, giving the aquatic and maritime kingdom an eminently symbolic and poetic place.

Located in Lithuania, the small town of Kaunas, at the confluence of two important rivers, offers Andreas Müller-Pohle, then in photographic residency, and his so particular approach, a place without singular quality, but particularly spared because of its position near an almost bucolic river, an idyllic vision, where European nature is still fortunately saved.